Mary Shelley and Fahrenheit 451 do their subjects and sources a disservice. 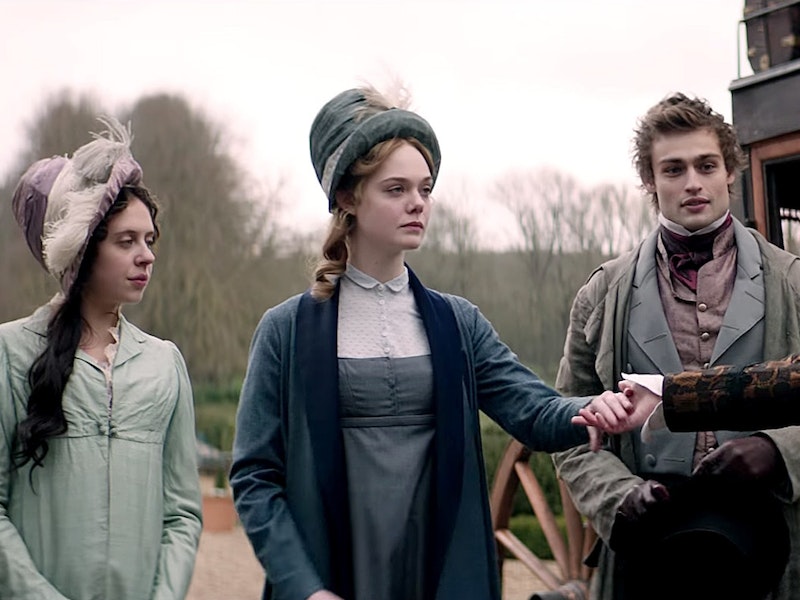 Popular scuttlebutt holds that Mary Shelley lost her virginity to Percy Bysshe Shelley in a cemetery—atop her mother’s grave, no less. The new biopic Mary Shelley depicts the event in a candlelit bedroom. That one choice neatly encapsulates the film’s misaimed approach to its subject. The lives of the Romantic poets are rife with dramatic romantic travails, emotional anguish, and personal extra-ness. (Lord Byron retaliated against rules prohibiting pet dogs at Trinity by keeping a pet bear.) They weren’t merely goth but the Gothic originals, and a movie about them should have no trouble winning the hearts of English enthusiasts and Tumblr teens the world over. The sheer amount of restraint exercised here to keep Shelley’s story as much a staid period piece as possible is extremely disappointing.

Haifaa al-Mansour, a Saudi director who broke ground in 2012 by helming Wadjda, that country’s first ever feature-length film, is perhaps unsuited to this material. Wadjda was a very low-key, not quite realist but natural enough picture, simply about a girl wanting to win a Quran memorization contest so she could afford a bike. Faced with the passions between titans of English literature, she’s fallen back on established musical cues and safe cinematography choices of British historical dramas. It’s hardly the first time a director has found themselves a bit lost in going from a low-budget first feature to a more polished second. She’s not helped by Emma Jensen’s script, which takes the same attitude of blandly framing Shelley’s life story through a modern lens of female empowerment in lieu of grappling with the contradictions of Enlightenment-era thought and gender roles.

The story focuses on roughly four years in the life of Mary Shelley (played by Elle Fanning), from when she met Percy Shelley (Douglas Booth) to the publication of Frankenstein. Her romance with her fellow writer and the development of her own authorial voice are the dual cores of the narrative—although the latter is entirely subservient to the former, which is ironic, given the film’s attempts at girl power sentiment. Other famous figures, like Lord Byron and John Polidori, exist at the margins without ever making clear why we still know their names today. The movie doesn’t even evince a high school understanding of the characters. Mary Shelley’s parents, William Godwin and Mary Wollstonecraft, are made out to be marginally-known writers when both were in fact pioneers of radical thought.

Elle Fanning is terrific at conveying the pitching throes of adolescent self-identity, though for all the British roles she takes on, her accent is still… not great. More pertinently, Booth is a sorely disappointing foil for her. There’s nothing romantic or Romantic about his Percy Shelley; no allure of a temperamental creator, nor a sense of danger in his relationship with Mary, even though he’s married when they first meet. Given how much of the story rides on the two of them together, his weakness essentially undoes any dramatic and emotional heft the movie could have mustered. Mary Shelley deserved a full-throated Gothic melodrama, not this PBS treatment.

If nothing else, HBO’s new adaptation of Fahrenheit 451 will be a great aid for any English students who don’t want to read the book. Whereas Cliff’s Notes might lead you to believe the common misconception that Ray Bradbury’s revered sci-fi novel is about censorship, it’s in fact an expression of his contempt for mass media, particularly television. The HBO film, written and directed by Ramin Bahrani, updates this derision for the 21st century, allegedly as a warning but in truth indicting existing social media for transforming all of us into sheep and turning us against good, precious books. It’s that kind of movie. Scratch the “If nothing else”; there is nothing else this movie has going for it.

In the future dystopia imagined by Bradbury and refined by Bahrani, all books are banned. This kind of censorship has no analogue in any real dictatorship that has ever existed—actual oppressive regimes find ways to push any literature that’s useful to them. But the book and film are less concerned with that than with their anti-media jeremiad. In Fahrenheit 451’s worldview, our supposed real-life antipathy toward books means we might as well be burning them all. (Never mind that we’re reading more now than in generations past.) That the premise of a “fire department” dedicated to burning illegal books doesn’t hold up too well in a future context as we currently understand it is brushed aside with some vague exposition about deleting “the old Internet” and adding hard drives to the bonfires. (The new Internet is called “the Nine,” which is never explained.)

Michael B. Jordan plays Guy Montag, a fireman who begins questioning his job and seeking out some forbidden lit. Michael Shannon plays his boss, Captain Beatty, and he’s a tonic as always, even though around 80 percent of his dialogue consists of explaining world-building details. Initially friends, animosity brews between them as Montag becomes more hostile to institutional anti-intellectualism. Plot-wise, the movie’s a slog, unable to make Montag’s philosophical development intriguing. It’s possible Bahrani recognized this, since the last act ditches this thread to invent an entirely new dilemma around a truly dumb technological MacGuffin. It’s at this point that the film sidles very close to becoming incomprehensible, with characters making choices without any apparent logical foundation right up until it perfunctorily deals with the MacGuffin and wraps up.

Television has made some impressive advances in terms of visual effects in recent years, but creating a blockbuster-scale fleshed-out fictional world still seems too big for one TV movie to handle. The movie settles for adding CGI screens to building and (of course) having a lot of drones buzzing about. How this world works and just why books are banned is never satisfactorily explained, which is a problem, given that these factors are key to the story’s whole philosophical underpinnings.

In one scene, Beatty exposits that their book ban is a natural extension of the “olden days” (i.e. our contemporary) banning of books with offensive content. One specific citation is feminists hating Norman Mailer. This movie is, with a straight face, trying to warn us against social media criticism of “problematic” works, connecting it to a broader suffocation of the idealized exchange of free ideas and claiming it will descend into the suppression of free speech. Which misunderstands the nature of criticism, of social media criticism, and again, the real-world political contexts in which books are banned.

It cannot be overstated how idiotic this film’s fear-mongering over the likes of Twitter is, the absolute dread with which it projects futuristic scrolling newsfeeds, replete with emojis. Not emojis! They destroy language! They’re specifically identified as being made to destroy language! I loathe many aspects of social media and my reliance on it for professional and personal interaction, and yet this film reflexively makes me wish to defend it.

Fahrenheit 451 is the most aggravating kind of movie, a stupid one that tries not just to be smart, but to tell harsh truths about the world. It’s the cinematic equivalent of a guy who’s somehow still very proud over not owning a television—making its medium all the more ironic.