Wound Up and Ready for Anything 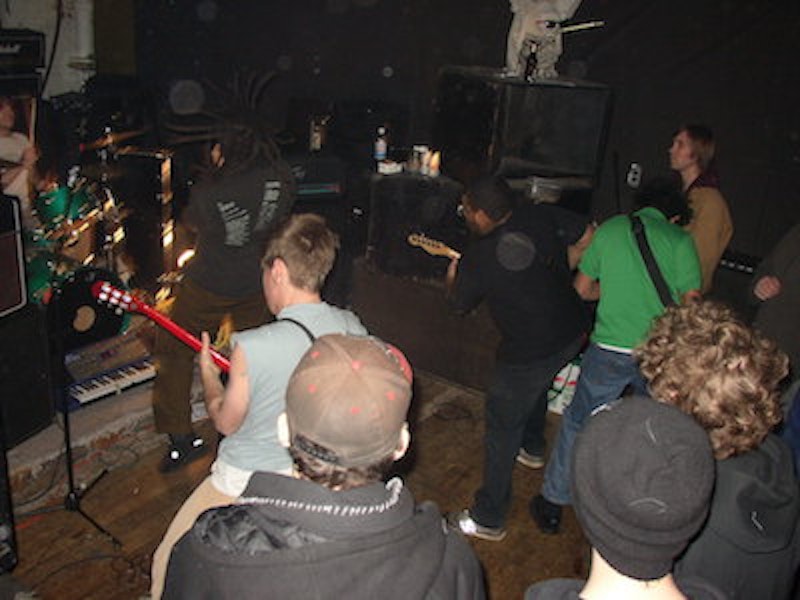 The innovative music and explosive live spectacles of Dawn Treader gained notoriety after the group started performing in west-central Maryland as an opener for popular mid-Atlantic hardcore bands. At the same time Jeremy Flynn and co. spent a chunk of 2001 recording and mailing out DT demos to attract more support from underground scenes outside of Columbia. One recording made it to the Cedar Rapids, Iowa-based label Robot Winter that fell in love with Dawn Treader's work and became the sextet's closest non-local ally. In 2002 Robot Winter released the first Dawn Treader album on CD. By 2003 they had a solid local following, began regularly issuing music on other small labels (including Flynn's own Metaphysics imprint), and toured nationally several times from 2003 to 2005.

An Ellicott City punk rocker named Justin Loys also helped bring Dawn Treader's work to a wider audience. Loys was a member of The Squints, a mathy schizoid punk band that featured DT members Ganesh Chandran and Danny Costa. Like his contemporaries, Loys found Columbia's sleepy disposition more annoying than charming, but his love for its eclectic scene inspired him to become one of the region's most original artists and a main d.i.y. promoter setting up shows there. Through his association with Costa and Chandran, Loys became an auxiliary vocalist for Dawn Treader.

Justin Loys: "There was nothing to do. [Columbia] was the wrong place for a young punk rock kid. Every now and then [The Columbia Association] would showcase local bands at this place Kahler Hall, so I figured out how to get in on it and my friend Katie Stansberry helped me book some really huge cool shows there. I was having a hard time getting shows in Baltimore as a baby punk, so I made it my personal mission to help build some kind of scene in Columbia.

When I was 18, I bought an e150 van with band stuff completely in mind. This would be the van we used for the first several Squints/Hobis/Dawn Treader tours. For the 2003 tour we attached a U-Haul trailer to it so that everyone could fit. Since we all shared so many members it was easiest for all of our projects to tour together.

We would play out of the same gear one band after the other, so we’d pretty much just tag each other out/trade instruments after each set. Jeremy and I booked most of the shows."

During the 9/11 era the uncertainty attached to a newly globalized world transformed the nostalgia for 20th century culture into a security blanket. Naturally then something as unprecedented as Dawn Treader elicited a myriad of reactions from ecstatic joy to confusion to ignorant dismissals from "the old guard."

Ganesh Chandran: All shows felt like a roller coaster: getting everyone’s gear set up, figuring out borrowed equipment and running the keyboard and cello through the PA took a long time. We inevitably showed up late to set up, so by the time we were ready to perform, the band and the crowd were impatiently wound up and ready to cut loose. But just like ascending the first hill on a roller coaster after a long wait in line, we never really knew what we were bound for on that ride but we were sure as hell amped and ready for anything. I always felt like my stomach dropped when the first note of the first song hit at every show and we just descended into the chaos.

Lizzy Cowan, cellist/early member of Dawn Treader: Everyone seemed enthusiastic about it and really loved the cello. That was fun for me, since it had always been this kind of nerdy thing that I did but then it became cool. I did eventually get an electric cello, too. That’s what I used for tour.

Al Charity: I think people who heard DT before seeing us were confused about why we didn't look like we sounded. Some of the earlier shows were pretty wild (Rick Weaver's house, the CD release show at Charm City Art Space) because we were all excited about doing this new thing and wanted to go nuts. I used to throw my guitar around a lot and had to eventually learn to fix it. We played some battle of the bands at UMBC and at the end of the last song Danny threw his guitar across the stage and hit me in the head.

Worrying about gas money and the van breaking down was pretty stressful. I also spent a lot of time worrying about whether the next small town would be the one where we encounter racist shitheads with nothing to do. Being around a bunch of other people all the time was kind of rough but there were enough of us in the van to kinda rotate to different people/groups after a while.

Danny Costa: Being a band comprised of mostly POC kids, having certain socio-political topics thrown in our faces was at times unavoidable. We didn’t look like any of the bands we were trying to sound like, and I think that that always made us feel very “othered.” We were never fully accepted into the fold of the larger Baltimore/DC scene. Certain people liked us, but it seemed like we were never taken all that seriously. I’m sure there were many reasons for this, but I can’t help but feel that there was an amount of low-key discrimination. It was much harder to be a band like we were in that time. This feeling of “otherness” is probably Dawn Treader’s biggest influence and primary “political” focus.

I’d say that in our immediate surroundings people loved us, especially our friends, but we brought a certain chaotic energy, a youthful lack of control that didn’t sit well with the uptight old guard, especially in hardcore circles that were born of straight edge.

My favorite shows were some of the earliest ones. We played a show in Frederick with The Obscure and a band called While They Slept at Rick Weaver’s parent’s house. I remember we played really well and “spazzed out” to an extent but it didn’t take away from actually nailing the songs. The “tightness” of Dawn Treader sets was honestly hit and miss because we put so much energy and emotion into what we were doing, a lot of throwing instruments and rolling around on the ground. I tend to remember good shows based on good bands we played with. Any time we played with Wake up on Fire was amazing. The radio shows were always fun. There were a handful of shows on our ‘03’tour that were memorable, specifically playing with This Bike Is A Pipe Bomb in a kitchen in Oakland. That show was great!

Brandon Korch: Our friends liked [Dawn Treader]. I think people in the punk community, to the extent they knew of us, had very mixed feelings about us, for various reasons. In general I hope we were nice people, but I think we were probably often well=meaning jerks who turned people off with our kinetic shows and rambunctious behavior.

I always found that I usually missed out on the most exciting things that happened during the shows because I had a tendency to look down at my drums while playing. It was always exciting to look up every once in a while and see a half dozen people on the floor, or a guitar almost completely removed from the player's body.

I remember that our first CD release show was very special. It was in the old Charm City Art Space, which was tiny. It was full of friends, and the space was so small that there was no differentiation to where the crowd stood and where we stood.

Lizzy Cowan: We had a lot of fun on our tour in 2003. We played at random places, including Iowa, Omaha, Detroit, San Francisco, Seattle, and Oregon. I can’t remember any specific show, but I did have to hide behind the amps so that no one would smash my cello accidentally!

Al Charity: We got to know a lot of people in and around Cedar Rapids/Iowa City, and I always had a good time there. In 2005 we played a house in Seattle (I think Firebreathing Kangaroo House) that was behind a warehouse and they projected movies onto the wall for people in the neighborhood. The Fort House in Omaha and Uncle Wiggly's in Talent, Oregon were also fun.

Justin Loys: Dawn Treader didn’t always "click" with everybody; in fact, I think it went over their heads. But I loved to observe the people who did get it. Holy shit. It was like a religious experience for them. We were all very ambitious. I believe we started touring because we wanted to blow up, get signed, live the dream! I mean, shit, I’d just spent all of my money on a cargo van, i felt dedicated to being a lifelong musician.

The best thing about touring was that we became family, we spoke our own language of inside jokes, we all ended up getting hooked on the same music. The bad thing about your bandmates becoming like family is that (in my opinion) family can hold the harshest grudges. The closer you feel to someone, the more likely you are to lash out at them. Touring could be physically and emotionally exhausting, and I've seen it cause plenty of people to re-think if they even want to be in a serious band.

Those early Dawn Treader tours taught me a lot about myself, the best and worst versions of me came out on those tours, but I don't have much regret. I've never felt freer than I did on the road with my closest friends.