The Enduring Legacy of Dawn Treader

From 2001 to 2005 these six musicians were collectively known as Dawn Treader. 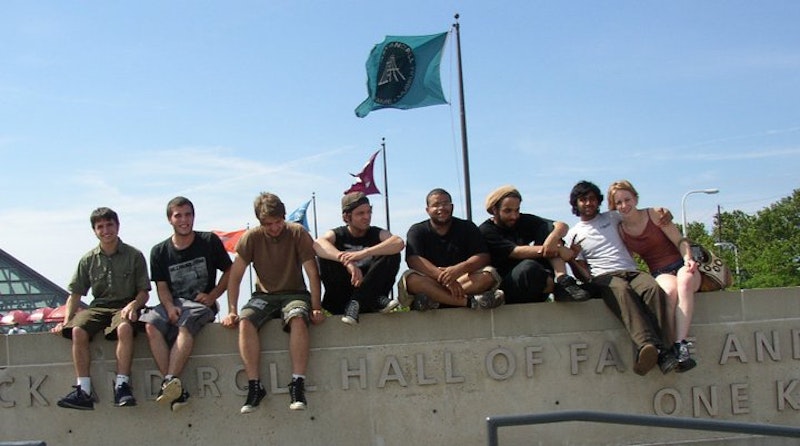 The year is 2001. The place: the planned community of Columbia, Md. There is an all-ages concert held here at a rented hall. Or maybe it’s a coffee shop. Or a community center. Or at someone's parents' house.

The first couple of bands look/sound/act like life-sized photocopies of each other. They've got tight pants; wallet chains carefully draped from back pockets, trendy haircuts and band t-shirts. The uniform is complete, barely a thread out of place. They all perform variations on the same guitar/scream driven set of formulaic rhythm 'n' static. An entire decade has gone by since Nirvana opened the floodgates and made agro "underground" rock an unrelenting pop culture obsession. Ever since then countless bands like this have played every day all over America. The angry loud sound at an D.I.Y. show has become as action-packed as Muzak at a strip mall.

Screaming Guitar Band Number 5487 quickly finishes up and unloads their standard-issue heavy rock gear. Then suddenly the modest stage is taken over by a sextet of scruffy kids dressed in low-key earth tone clothes. They load in amps and guitars of varying shapes and sizes, a plastic synthesizer, a cello, and a drum set. Their tall dreadlocked lead singer busily moves around the stage area distributing carefully written sheet music and set lists. Soon enough the room sounds more like a conservatory than an all-ages punk show. The cellist tunes her instrument to the crystal tone of the synth's piano setting. Amps belch out jolts of feedback and electronic buzz as the guitarists adjust and re-adjust their equipment searching for the best ways to work around technical glitches. Before even a single tune is played it's obvious that this crew is not just another screaming guitar band.

The dreadlocked singer sets up his keyboard and tests the mic and then announces, "Uh... Hi everyone, we're Dawn Treader."

Dawn Treader. It was originally the name of the magical ship in The Voyage Of The Dawn Treader, a young adult fantasy novel written in 1950 by British author C.S. Lewis. Voyage... was the fifth book in Lewis' Chronicles Of Narnia series.

Dawn Treader... even their name makes everything else here seem boring and homogenous. After awhile a hush falls over the crowd. Then the group members all turn to face the drummer. And then a nuclear bomb explodes, the portal to another dimension opens, and imaginary fallout rains over the crowd, burning out expectations and leaving only chunks of meaning strewn haphazardly.

It's way more than a show now; it's a beautiful new mystery.  Dissonance and harmony, chaos and euphoria magically entwine: the lush neo-classical melodies of cello, piano, dramatic vocals, and jangly guitars melt into monstrous crescendos of distortion and atonality. The vocalist zooms back and forth across the room gesturing wildly, singing-screaming through an overloaded p.a. system, his keyboard gets knocked over (more than once), guitarists are convulsing and jumping around swinging instruments through the air like broadswords. Even when notes are flubbed and strings go out of tune the ensemble does everything they can to keep this music together. By the end of the set, the audience, the band and their compositions have been pushed beyond all reasonable limits.

This is the enduring legacy of Jeremy Flynn, Al Charity, Danny Costa, Ganesh Chandran, Lizzy Cowan, and Brandon Korch. From 2001 to 2005 these six musicians were collectively known as Dawn Treader.