The birth of a sprawling sonic tapestry. 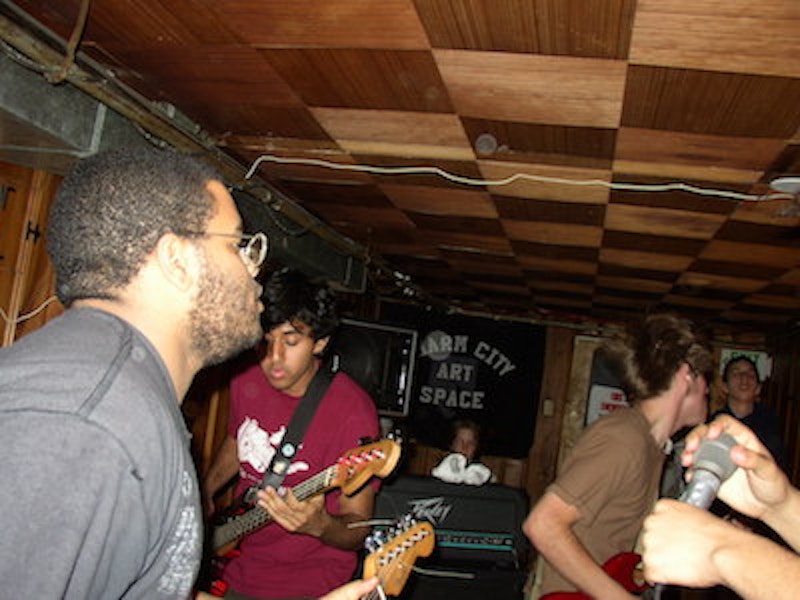 Columbia, Md. is a racially/culturally integrated, eco-friendly, self-contained "new town" modeled after the post-World War II communities of Europe that were created by allied national governments. Founded in 1967 and inspired by the civil rights movement, Columbia was James Rouse's most ambitious building project and the first planned community ever built in America by commercial real estate developers. The teenage members of Columbia-based sextet Dawn Treader didn't care too much about the pioneering status of their suburban base. If it had any notable effect, the town's prefab aesthetic stood dramatically at odds with the untamed catharsis of their music.

Danny Costa—guitarist/founding member of Dawn Treader: “I was weirded out by the planned community aspect of Columbia, having “village centers” and Columbia Association ID cards always seemed dystopian to me. I kind of found my escape playing music, picking up guitar around age 10. As the years went on feelings of alienation in Columbia persisted, but as I entered middle school, I met a few like-minded friends who were interested in the same sort of stuff. Some went on to be members of Dawn Treader—Brandon Korch and I met when I started sixth grade!

“From there, I’d say my situation in Columbia improved because I was doing something I really enjoyed with close friends. It felt really idyllic, especially early on. Most of us went to Wilde Lake High School, so we’d hang tough as a big extended group of friends even beyond playing music together. Most of us lived within walking distance from each other’s parents’ houses, and life was mostly just going to high school, hanging out and playing music. Brandon, Jeremy (Flynn) and I all close to one another, Lizzy (Cowan) was pretty much in the same neighborhood.”

Al Charity grew up hearing his grandfather's delta blues playing and his dad's rockin' electric guitar prior to forming his own alt rock/hardcore combos with a schoolmate/local drummer named Shi. Jeremy Flynn, a mutual friend, was a member in one such group, a fast punk band called Self Explanatory. Beginning with this crew Flynn and Charity forged a musical collaboration that would go on to be a defining element in nearly all of their subsequent projects from 1997 to 2005. Like Danny, Al didn't relish Columbia's slow-paced, antiseptic environment.

Al Charity—guitarist/vocalist/founding member of Dawn Treader: “I remember being pretty bored a lot of the time. For various reasons I didn't do a whole lot of hanging out before joining bands with Jeremy and Brandon. Everything closed early in Columbia, and there were only a few public/semi-public places where kids could hang out. I worked at an ice rink when DT first started and I spent a lot of my non-work time just hanging out there while other people worked. Sometimes we'd hang out at a golf course or on a bike path in the middle of the night. I drove around a lot, listening to mix tapes I made. Jeremy (and maybe Brandon) used to go to the mall sometimes to hang out with friends while they were working.”

Bassist Ganesh Chandran was the only non-Columbia resident who played in the early Dawn Treader lineup. He was from Ellicott City near the Baltimore/Howard County line and befriended Jeremy Flynn at a summer camp called Teens On Tour. Bonding over a shared love for pop-punk and emo music, Ganesh and Jeremy stayed in touch after the camp ended. This led Chandran to hang out in Columbia where he quickly became part of Flynn's circle of musicians, artists, and eccentrics, most notably Danny Costa and other future DT members. His early memories of hanging out with Costa and co. illuminate a symbiosis shared by Columbia's underground scene and the egalitarian values of James Rouse.

Ganesh Chandran: “What stands out most in my mind about Columbia was the diversity and acceptance the kids (there) had for one another. It was exciting to meet skateboarders and musicians from different cultural backgrounds. In Columbia I was exposed to jazz, hip-hop and graffiti art from guys who weren’t punk by conservative standards but would always be at punk shows to support their friends. Feeling safe and accepted is what helped cultivate such a creative and exciting music scene in Columbia around the time DT was getting starting.”

Hobis and Mop Attack were two bands that played an important role in Dawn Treader's birth. Hobis started in 1998, and existed concurrently to Dawn Treader through 2005. They featured Al Charity, Jeremy Flynn, and Brandon Korch. This trio's music was frenetic and moody, but, unlike DT, Hobis' melodic sensibility was primarily influenced by post-hardcore rock. The spazzoid prog-ska storm Mop Attack first erupted in 1997. More than half of Dawn Treader was part of the band. They performed long semi-improvised compositions and featured 10+ members on guitars, horns, keyboards, vocals, and drums. Mop Attack's brash chaos and the tightly constructed songs of Hobis were fused in DT's odd sonic tapestry.

Classically-trained cellist/pianist Lizzy Cowan was a big fan of electronic dance music and hip-hop. She’d been playing mainly in school orchestras for nearly a decade before accepting her friend/schoolmate Danny Costa's invitation to become part of DT's ambitious endeavors in early-2001.

Dawn Treader's major catalyst was Jeremy Flynn, the band's primary composer. In 2000 he began to write sprawling quasi-symphonic pieces that blasted the elements of his previous work into new dimensions of intensity and sophistication. Flynn, Costa, Charity, Korch, and bassist John Doyle started playing this material as a quintet called Friend Of The Family before quickly taking the name Dawn Treader as a tribute to C.S. Lewis and a poetic allusion to their music's mystical nature. Ganesh Chandran's innovative bass work filled the void left by John Doyle early on, but band members can't remember exactly why Doyle left the group.

The new melodies unleashed by this ensemble were more like the plot twists of cinematic fantasy than any conventional rock ideas.

Brandon Korch—drummer/founding member of Dawn Treader: “We were influenced by film more than any other non-music genre. We had these Bifocal Media videos of bands that were interspersed with film collages that we liked a lot. Dawn Treader was forming around the time when the last Matrix/first Lord of the Rings/first reboots of Star Wars were coming out. Jeremy and I always went to go see those movies, and were so happy to be immersed in those worlds, and would spend hours talking and joking about them.”

Danny Costa: “I had a teacher who in my last year of high school showed my Latin class David Lynch’s Mulholland Drive and gave the class a pretty in-depth analysis of the movie. Lynch’s work has always resonated with me and especially after that. Shout out to Bill McCarron, my all time favorite teacher!”

Al Charity: “I worked at Blockbuster Video at the time which allowed me to watch Mulholland Drive every other night for a couple months. Aside from that, I was really into long dramatic movies where nothing really happened and people seemed like they were having a bad time.”

The stark contrast of melody and noise was a 1990s rock hallmark, and also a big element of early-2000's screamo, a tag that's often reductively pinned to Dawn Treader. Though they were heavily influenced by all that, they stood out from the screamo pack by redefining the juxtaposition of loud and quiet. Their euphoric melodies served to frame and complement noisy rhythm explosions and vice versa. The delirious task of crafting such intricate arrangements strengthened the bond the band members shared as collaborators and as friends.

Danny Costa: “Jeremy’s an extremely gifted musician, having mastered several instruments and music theory at an early age, he had a really distinct style; whether a catchy drum beat or unconventional riff, Jeremy was extremely attentive and detail-oriented when it came to music, always pointing out odd time signatures and things that would be missed by the casual listener.

“With this underground influence, we were exposed to a lot, and always loved rap and pop music. We put on the radio in a pinch, and I think that that kind of openness probably lent itself to why we never thought twice about blending more melodic elements in with our music. We weren’t elitists. It didn’t make sense to us to leave anyone or anything out.”

Brandon Korch: “We’d notice tropes and tools that other bands would use, and integrate and twist them around during band practices, in an attempt to make each other laugh. Sometimes these little jokes would be in the final versions of songs, and sometimes they’d be a complete hiccup and everyone would have to wait until the next downbeat to get the song back on the rails. There was always a decent amount of band drama floating around. However, when you came up with something that made people laugh or was different than the way the part was supposed to go, but blended seamlessly into the song, it often served as a way to turn the page and take the edge off of some more intense moments.