There’s No Such Thing as Electability

Trying this hard not to get beat will get the Democrats beat. 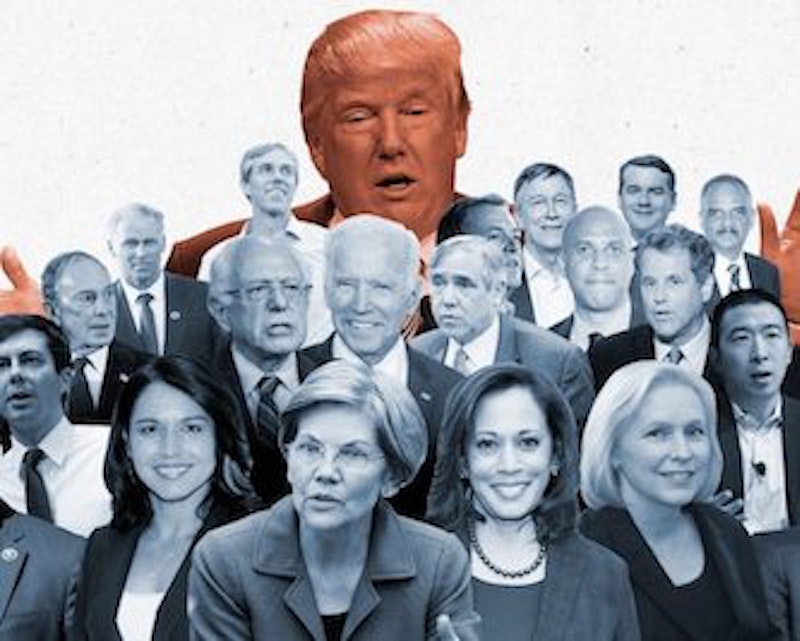 There are two connected reasons why Donald Trump is liable to win in 2020: Democrats' fear of losing and their obsession with the simplistic demographics of race, gender, class, and region.

The road to beating Trump apparently forks right at the outset. Do Democrats want a "progressive" candidate (Sanders, Warren) who "energizes the base" or a moderate candidate (Biden, Delaney) who can claw back some of the white working-class vote in PA, WI and MI? Should they nominate a female candidate who can widen the gender gap, a black or Latinx candidate who can turn out minority voters, or a white male who seems likely to win because he resembles previous presidents? If they could figure out clearly who or what sort of person is most “electable”—or who is the safest bet—they'd know whom to nominate, for beating Trump is the first priority.

There’s no right answer to the question of who's most electable. A number of candidates have a plausible route to victory in November 2020, and a candidate of any race, gender, or ideology could get thumped. The factors that decide close elections are myriad and chaotic, and though consultants and pundits are always trying to find the demographic key that unlocks the presidency, there’s rarely—or rather never—a single factor that explains the outcome in a closely-contested national election.

Anyone who tells you that there was such a factor in the election of Trump, or in the election of Barack Obama, is fooling themselves, or perhaps just trying to fool you. 2020 will turn about equally on minority turnout and turnout among people under 34, for example; on how "suburban white women" vote in Michigan and on unexpected events next fall; on social media manipulation and the Electoral College as set out in the Constitution; and for that matter on how the vote of left-handers or people with green eyes breaks down.

There are 20 different plausible explanations for Trump's victory in 2016, and the Dems have tried many of them on. He won those three states because he promised to bring back manufacturing jobs. He played on racial resentments, or the Russians interfered on social media. Some voters are sexist and didn't want to vote for a woman. James Comey announced that the investigation of Hillary Clinton's emails had been revived. Michael Cohen prevented the Stormy Daniels story from emerging just before the election. Allegedly, it was decisive that Trump got more of the white female vote than Clinton, or it was the Electoral College, or the relatively low black voter turnout (as compared to 2008 and '12, when Obama was a candidate).

The youth vote and the oldsters', the black vote and the white, the female vote and the male, the weather on election day in city X and the last jobs report: Each of them was "decisive" in the sense that it was adequate in itself, holding the other variables constant, to explain the outcome in a particular state. Indeed, the fact (if it is a fact) that left-handers split evenly rather than going 70 percent for Clinton is explanatory in the same way, and to the same extent.

I heard commentators on cable again last week saying that white women were the key to Trump's victory, and will be the key to defeating him. Everyone assumes that people prefer to vote for someone like themselves demographically, so in order to re-impose the gender gap, Dems ought to nominate a woman (a white woman, I suppose, on this view). But in fact a genuine gender gap made up equally of gaining women's votes and losing men's obviously doesn't help Democrats at all. In 2016, Clinton won women overall by 15 points and lost men by 11. Let's say they win women by 20 points and lose men by 20 next time. They will have wasted their efforts (again).

And the "women and minorities" strategy is liable to lose white women again, and start driving minority men Republican or leave them not caring to vote. It doesn't even coherently sort voters into groups, splitting many of us down the middle, or dividing not only all but also each of us up by our race, gender, age, region. It leaves people with the dilemma of voting with their gender or their class, for example.

Trump won Pennsylvania by about 44,000 votes out of over five million cast. Anything that increased Trump's vote that much, or depressed Clinton's, or that both increased his by 22k and decreased hers by 22k, appears to explain the outcome with equal plausibility, and each such explanation is indeed merely apparent. Any identifiable group constituting four percent of the population was equally important in the sense that if it had broken down otherwise than it did, the outcome would have been different.

There’s no single-factor or even several-factor account, and Trump had many other possible routes to victory than the one he pursued. If he’d toned down the racial material and worked on breaking off 20 percent of the black vote or 30 percent of the Latinx vote, for example, he might’ve carried Virginia, Colorado, and Nevada, and won without Wisconsin or Michigan. While Democratic strategists obsess about who can carry PA, WI, MI, Jared Kushner is sneaking up on them elsewhere.

As 2020 dawns, Democrats will try to figure out the lessons of 2016 or try not to repeat the same mistakes, an approach which is liable merely to introduce new mistakes. Thinking they understand how they lost last time, they're going to lose in a slightly different way this time. There are many possible ways to win, but fear of losing is likely to lead to losing. Obsessed with the elusive property of electability and the blue-collar voters in three states, they're likely to nominate a truly uninspiring and incompetent candidate named Joe Biden.

A moderate Democrat who can bring back some rural and working-class white voters can win Pennsylvania. But so can a progressive candidate who can maximize turnout in Philadelphia and Pittsburgh (also in York and Harrisburg). There’s no answer in general to which kind of candidate is likeliest to win. Start with a whole person, not a race/gender/ideological pastiche. Focus on particular qualities, not group memberships.

Meanwhile, if candidates or consultants are looking for the one key to victory, they’re looking in vain. If you're a Democrat deciding among candidates, you shouldn't start from “electability,” which means almost anything and hence almost nothing. Start instead with the person who best represents your sincere opinions or the person (if any) whom you would most want to be president, and build an electoral strategy.

To get a sense of who might have the best chance, look for a candidate and a campaign that displays nimbleness, adaptability, imagination, a touch of improvisation and inspiration. Trying this hard and this mechanically not to get beat will get you beat.