The divisions of Americans are more extreme. 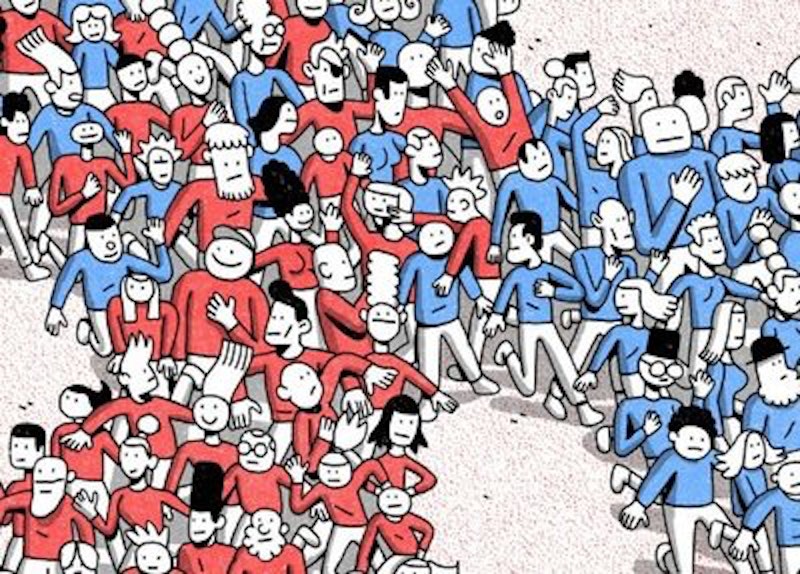 Today, when we try to explain political results or describe the political landscape, we often do it in terms of which demographic groups—genders, races, orientations, classes, regions—voted for whom. And as political consultants and politicians try to win elections, they start the same way; they try to figure out how to dominate among white suburban women, for example. I've argued that politics relying on exploiting demographics—a style and a strategy more and more relentlessly prosecuted by both parties—is a contradictory nonsense, as well as a terribly unfortunate attempt to make the divisions between Americans ever more extreme. Here, I'm going to elaborate on articles I wrote for The Wall Street Journal.

First, it’s all rather evil.  The basic approach of the Clinton campaign, according to its own strategists and surrogates—white guys such as Robby Mook and Joel Benenson—was to focus on relentlessly on turning out “women and minorities.” As demographics shift, they’ve long held, Democrats will dominate this growing segment of the population, and hence elections. (There is one problem here; the category “women and minorities” makes no sense.)

This has been a strategy for the last several cycles, in particular since the emergence of the “gender gap” in the 1990s; it was relentless in 2016. And I think it's fair to say that Republicans have implicitly focused on white people and men as their basic constituency for decades, at least since Nixon played "the Southern card." In Trump/Bannon nationalism, with its throwback style of sexuality and racial signaling, this appeal has become explicit.

In 2016, both sides leaned heavily on demographic analyses in deciding where the candidate should appear, for example, or in figuring out how to assemble an Electoral College majority. Particularly for the Democrats, however, this style of analysis is breathtakingly incoherent. The electoral coalition they imagine—of women, minorities, urban dwellers, gay and trans people—is conceptually impossible. The simplest way to see this is that the population cannot be split into two groups, women/minorities and men/white people.

A majority of American women are white, while half the members of racial minority groups are men. A coalition in which one party represents women and minorities and the other represents men and white people splits each of the white women and each of the minority men right between the hemispheres of their brains. Mook and Benenson were calling on people's race to vote against their gender, and vice versa. If people can't undergo fission into their demographic memberships—if, for example, a black, straight, middle-class man can't be pulled apart into four different voters—this is all nonsense.

As a matter of fact, Trump won white women, leading to an outraged feminist condemnation of their reactionary sisters. Didn't they know they were women first and white people second? Trump also did surprisingly well among minority men. These splits could continue to grow as the parties try to maximize them, and neither party would win an enduring advantage.

If I want to vote the way the parties want me to vote, and I am, for example, a rural straight Latino female, how would I proceed? The parties not only want to slice up the population and turn bits of it against the other bits, but to slice up each of us and, I suppose, turn us against ourselves, or force this poor sap to figure out whether she's more straight than female, or more rural than Latino.

This does, in part, explain the interminable deadlock of our politics. Even as Democrats wait for demographic shifts to carry them to power, the growing minority population is half-male, the growing out-gay population is mostly white, and so on. Almost any way they try to maximize the demographic advantages they believe will serve them will also maximize the advantages of their opponents. We're likely to be stuck here for a long time.

The parties got into this hell through polling, which has dominated every campaign. You can poll women, and you can poll white people. These two polls deliver different numbers; they appear to focus on different demographic segments. But the populations overlap at a rate of 50 percent, and your appeal is liable to alienate the other 50. These data heads seem clever, but they’re making howling mistakes.

If there’s a stage further into or beyond demographic politics, it may be signaled by Cambridge-Analytica-style "psychometrics." The Democrats were still operating in 2016 at the primitive and incoherent level of large demographic segments, but the data analysis and targeting tools that are coming online now promise to target voters, or consumers, "down to the level of the individual." If that were indeed possible, it might to some extent overcome the sort of conceptual problems I’m identifying. The Trump's campaign's micro-targeting, as opposed to the Dems' primitive approach to the electorate in terms of large-scale groups demographic segments, might in part explain how Trump beat Clinton.

Micro-targeting might also lead to more sophisticated manipulations, more divisive appeals to group identities, smaller echo chambers. And yet if they come into my social media feeds appealing to my eccentric politics or consumption behavior as well as my demographic memberships—if they really atomize their appeals down to the level of individuals—the lines between groups might liquify a little.

I’m a white, heterosexual, rural male. And yet, if I were forced to choose sides among the demographic parties, I'd choose to go with the women and minorities (or I would, if the category were coherent). I don't mean to make parties representing male whites and female people of color precisely morally equivalent, and the historical oppression exercised by people like me would make me go in the opposite direction; I don't want to be in the racist, sexist party (though I also don't want to be in the statist party). But, standing outside the process, it's hard not to notice the cumulative effects of both parties together trying to maximize the gender and racial gaps. It’s tearing the country apart, at the scale of whole regions and groups, but also in villages, offices and families.

We might say that demographic politics imply a theory of human identity in which each of us is a stack or collage of memberships in social groups, in which each of us is a race/gender/nationality/orientation/class. Our behavior, and in particular our consumption and political behavior, is supposed to follow out of this stack, and hence to be manipulated through these memberships, which call out loyalties and real interests, but which are also in conflict, between the groups or within the self.

I wonder whether that exhausts the way you understand your self, whether that's all you are or all you might aspire to be.