Ten Types of People to Avoid 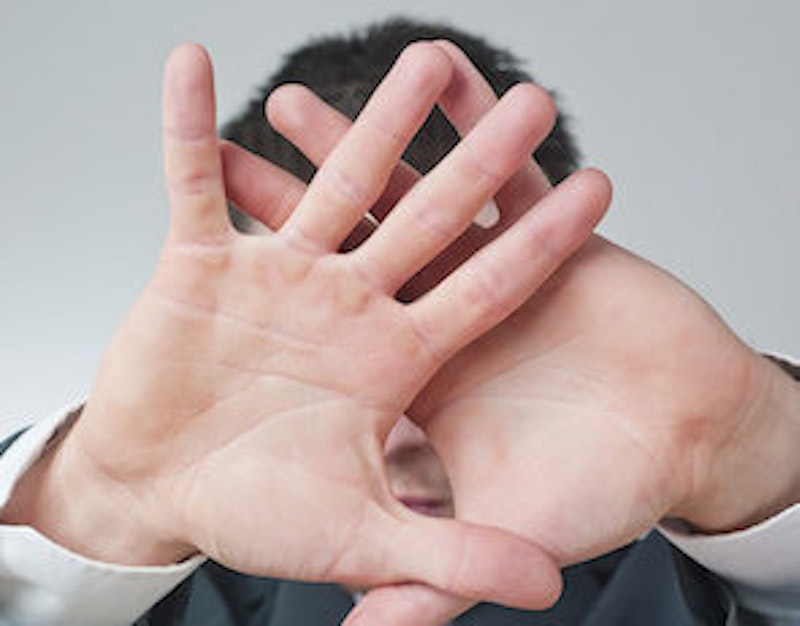 Men with ego/anger issues. This group's at the top of the list for a good reason. The worst of them are the wife beaters and the road ragers. Everyone's familiar with the guy whose ego’s so fragile he can never allow himself to be challenged, regardless of the situation. There was the guy who once got mad at me when I expressed my displeasure, without swearing at him, after he'd allowed his dog to bite me. These people have convoluted minds and emotions. And then there was the young, boozed-up Wall Streeter on the commuter train to Connecticut one evening who got called out for copping quick puffs on a cigarette on the platform during station stops. The offended alpha male then got in the face of his accuser and mocked him mercilessly for 15 minutes in front of a full car of people.

It was an ugly, disturbing spectacle that the victim suffered stoically. I was tempted to say something, but wasn't willing to get into it with the angry frat boy who'd already worked up a full head of steam. I'd learned long ago to just let his type take that puff on a cigarette, and now it was time for the tobacco cop to learn it too, the hard way.

Conversation hogs. Nothing you say to them registers. Your words are ignored so they can return to their preferred topic, which is often themselves or their children/grandchildren. A good conversation's like hitting a tennis ball back and forth in a pre-match warmup—the object is to keep the ball in play. But when you hit the ball to a conversation hog, they pick it up and practice their serve on you.

I've known several conversational narcissists over the years. When one of them once droned on ad nauseum about various topics I had no interest in, I reckoned that staring straight at the floor for several minutes might communicate my ennui, which had already turned into anger. No such luck.

Grievance mongers. They're perpetually at war with the world, and always want to broadcast their latest battle, no matter how trivial. I know one perpetually aggrieved individual whose life got wrecked by someone who falsely smeared him on Twitter. But even though he should be devoting his full energies to rectifying that matter, he's constantly getting into other unnecessary skirmishes. He justifies this by saying things like, "Nobody should ever underestimate my fighting spirit," but would be smart to heed the words of warrior/philosopher Sun Tzu: "He will win who knows when to fight and when not to fight.”

Whataboutism practitioners. Certain partisans, when presented with a critique of their political corner, respond reflexively with, "But what about [insert political grievance here]. Vladamir Putin loves this rhetorical ploy, which was a favorite of Soviet propagandists during the Cold War. Once you've taken the whataboutism bait, a diversionary tactic, you get sucked into the abyss of moral relativism and it's over for you. Insist on sticking with the original topic, even if it ends the conversation.

"Friendly" drunks at bars. Dealing with this potentially volatile situation requires a two-part strategy. First, always banter in a jovial manner with him if he engages, because this guy can turn mean suddenly if he thinks you're ignoring him. Then pretend you know somebody on the other side of the bar and go there.

I had such an encounter at a happy hour in Florida last winter. I joked with the drunk like we were buddies for a few minutes until I could slip away. Thirty minutes later, three guys from the kitchen were escorting him outside, and he wasn't going gently.

Aggressive political conversationalists. Some enjoy discussing politics like it's a verbal version of a UFC match, but not me. If you want to avoid someone trying to choke you out, as opposed to some light sparring, look for the signs its coming, and change the topic.

I was recently engaged in a chat with an inside-the-beltway Hillary Clinton supporter who got visibly agitated and wouldn't even concede the basic point that Republicans have traditionally been more wedded to the concept of free markets than Democrats. Those were my signs to bow out, but I persisted and it became uncomfortable enough for a third party to intervene.

Beer nerds. If you venture into a brewpub, beware of the guy in the Mumford & Sons t-shirt sitting alone at the bar perusing Draft magazine with a thoughtful look on his face after every sip of his Kentucky Breakfast Stout. He may just be lying in wait to tell you all about his unfiltered, triple-hopped IPA with its perfect pH balance and wonderful mouthfeel. If you see earnest people taking notes around some tiny "flight" glasses, consider going next door, even if it means having to drink a Bud Lime Light.

People who reference Seinfeld  and/or The Simpsons constantly. I once knew someone who ended each of her sentences with "and stuff like that." The above pop-culture-driven conversational tick is right up there with that one. It's a particular problem for me, as I've never watched a full episode of The Simpsons and not many Seinfelds, an admission that's brought shock to several people I've shared it with.

Bad faith debaters. A few months ago, during a discussion of right-wing pundits, a guy I know was insisting that Rush Limbaugh was more intelligent than Ben Shapiro. The problem was that he'd never heard of Shapiro until I'd brought him up two minutes previously. Even after I pointed out the absurdity of his position, he still wanted to argue the point.