The Secret Code of Urinals

Nothing gives me more anxiety than pissing at the trough. 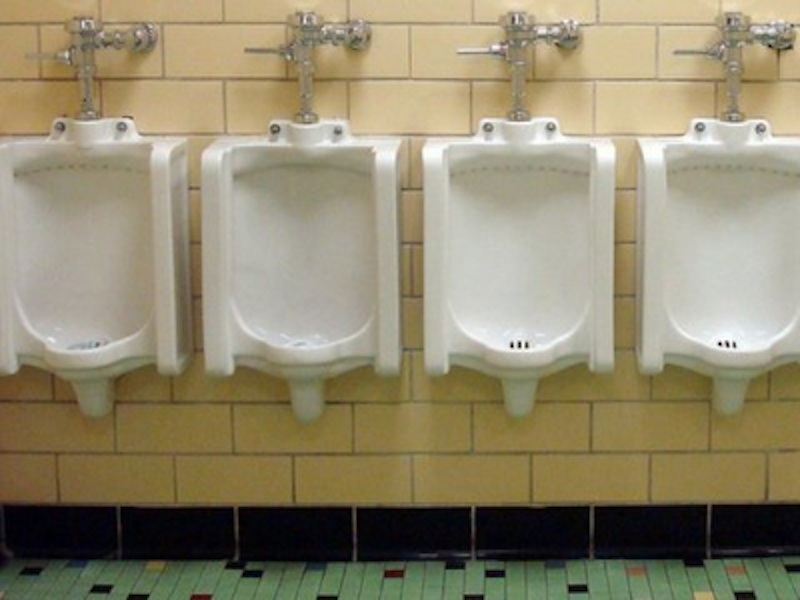 I was at a club last weekend, waiting on line to use a stall when I saw this extremely hot guy peeing at the urinal. He turned his body to face a corner of the wall so he could pee in private. I couldn’t see his face. All I knew is that, from what little I could see, he was tall, dark and handsome. Watching him piss from behind (and I’m not even into that) I forgot I was staring and he turned around, still putting himself away, and I got a look at his face and I was right. He was so hot. Damn. He kept on putting himself away, smirked—I knew I got caught staring—and when he passed me he put his hand on my shoulder and told me he liked my outfit. Face crack of the century.

I’m 33 and till this day nothing gives me more anxiety than having to piss at a urinal. The only time you’ll ever catch me at one of those puppies is if I’m alone and think I can pee in peace hoping no one else comes in within the next 10 to 14 seconds. It doesn’t matter how long the line is to use a stall. Invariably there’s a line. But I’ll wait however long it takes unless I have to go so bad that oh my god fucking fine.

The urinal I hate the most is that trough thing where you don’t even have a modicum of privacy. It’s all, Hey guys! Let’s pee in unison, wouldn’t that be fun! I’m envious of guys who can confidently approach a urinal with ease. To me standing at that thing seems like such a performance of masculinity. It’s like, yes, let me take my entire cock and balls out so I can show how loudly I can pee. Look at how far away I can stand from the urinal, too, because I’m a man, which means I have excellent aim. Listen to me exhale while I piss, because I’ve had to go for the past two hours. Now I’m letting it all out, like I’m coming, and I want the whole place to hear how long I’ve kept it in and how good it feels to let it all out, finally.

Maybe it’s that I’ve never understood the secret code of pissing at urinals. Where are you supposed to put your eyes? Do you stare at your own penis? Do you glance at the pee stream of the guy next to you? Do you become one of those amazing one-handed pee people who holds their cock with one hand and scrolls through their phone (or sends a text) with the other? Are you supposed to look away? Strike up a convo?

Part of my anxiety around urinals is that I think going to the bathroom should be a luxurious experience. The other part, I know, is that I’m a gay man who loves cock and I want to see as many cocks as possible. I’m not supposed to look, though! Bad gay! If there’s an ugly guy next to me then I’m definitely not going to try to sneak a peak. But if he’s hot? Baby, you know Imma do my best “I’m not looking at your piece but let me take a sneak peek right quick.” There’s a long history of men who have sex with men trolling toilets, glory holes, looking for and having sex in the men’s room, tapping on the floor to indicate they’re ready for sex or meeting in the men’s room because there’s no place else to go. If you go to a gay male-centered mega club there will be signage in the toilet warning you that two people to a stall is a definite no-no.

The men’s room is a sexually charged space, even for straight guys. You don’t have to be gay to get caught looking at another mans’ penis. You could just be curious about someone else’s dick, or you might just want to see how you compare. Still, the urinal is a really sexual place, and that’s why people strike up conversations and joke around to dampen the sense of sexual availability. What I want, though, is a bathroom where there are multiple stalls with disco balls hanging inside but there is only one urinal. That way if some guy comes up to you know he’s ballsy.