The Life of a Bartender

It was fun, but you have to know when to quit. 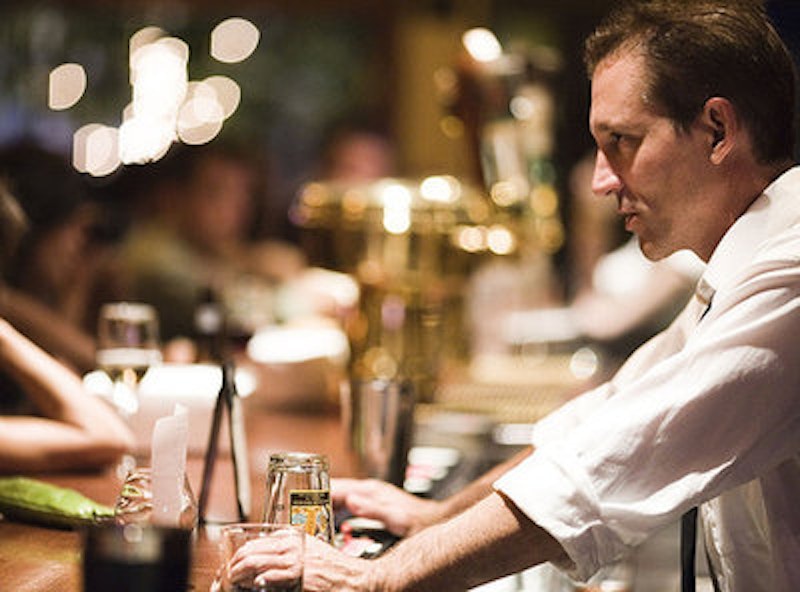 There’s a lot of craziness in the restaurant business. Nasty bosses, weird customers and drug-addled co-workers. I left that line of work long ago, but retain many fond memories. Before reaching a certain age, it's a lot of fun. I was a bartender during college, and it was good work for someone with no real skills other than the ability to carry to carry on a conversation with strangers and acquaintances.

I got my first bartending job by lying to the owner, telling him I used to work at my uncle's fictional bar. To enter a new work field, you often have to invent a work history, because you need "experience" to get that first job. There’s very little choice. It was a dive bar in College Park, Maryland, and customers ordered mostly beer and simple mixed drinks, so I was able to fake it until I ended up getting fired for not charging an off-duty fellow bartender for a beer.

One of my customers was a construction foreman, and when he heard about my sacking he hired me on the spot. My only job was to lower a pail attached to a rope 50 feet down into holes they were going to fill with concrete. I'd fill the bucket with water, pull it up, dump it, and then repeat the process. This was all I did for eight hours a day.

The pail-dipping work paid well, but got old quickly, so I headed back up to college in northeastern New York State, where I landed a job bartending at a Steak & Ale restaurant. That’s where I first witnessed restaurant craziness. One waiter, Mike, punished customers he didn't like by pressing their loaf of bread under his armpit before delivering it with a tight smile to their tables. The cooks were wild high school kids who spent much of their time in the walk-in "doing Whip-Its," which involves inhaling nitrous oxide from whipped cream canisters.

My coolest boss ever was at Steak & Ale. Warren would have us over to his apartment complex for tennis. He'd bring a six-pack of Coors down to the courts at 10 o'clock in the morning. I was impressed with his style. My excellent, extended run at the steakhouse ended rather abruptly though, when "corporate" sent in Rick, a hotshot with a big ego, to run the place and get the numbers up. Rick and I didn't hit it off, so he made Warren fire me. Warren called me into his office and said, "I'm taking you off the schedule," which took a few seconds to register as "You're fired."

Undeterred at age 20, I headed out to Martha's Vineyard that summer. It was easy to find a bartending job at a place in Edgartown that specialized in broiled lobster. I slept in my car until the owner, Ralph, offered me a free room (a total dump) over the restaurant, with only one restriction—that I couldn't have any overnight guests. I readily agreed, eager to escape my car. By that time my college buddy Matt had joined me on the Vineyard and had found a job too, but he was getting harassed by cops for sleeping in his car, so I let him stay there one night. Ralph heard extra footsteps and called the cops instantly. I was stunned when I saw the uniformed officers charging up the steps, with Ralph close on their heels. The cops made Matt leave. Afterwards, Ralph reminded me that he had warned me. I kept working for him until the end of the summer, and we never discussed it again.

After graduation, it was out to San Francisco where, after a short stint as a nighttime security guard at a Bank of America office on Market St., I got a bartending job at a popular place in the Marina District. The bar manager, Dick, ragged on me all day long, saying I had to "pick up speed," even though I was working my ass off. Then, suddenly one day, he bought me a beer during my shift and chatted with me like I was an old friend. My hazing was over.

The bar's owner, Jack, was a cokehead and alcoholic. Jack had a cocky, "tough guy" exterior, and I hated him for a long time. We both hung in there, and eventually became fond of each other. One drunken night, however, Jack got upset about something he imagined and ordered me to come in and meet with him the next afternoon at two. I did, but when I sat down at his table, he had no idea why I was there. Jack had blacked out the night before, and had no memory of our conversation.

One day I reached back into a drawer behind the bar trying to find something and discovered instead a fully-loaded revolver. It was the first gun I’d ever held. There was a hot-headed bartender there, Frank, who often went off on me when things got real busy at night. Frank could be very cool, but his switch would flip under duress, and he'd go nuts in a scary way.

It was time to move on. I got a job at a trendy Northern Italian bar across town in the Embarcadero area. All the waiters (there were no waitresses) were cocaine users. The biggest cokehead of them all (a different Matt) got a nosebleed once while waiting on a table. A very large waiter, a flamboyant Italian immigrant named Luciano, really played the role to the hilt. He'd theatrically call out "ciao bella" or "ciao bello" when customers arrived and they'd eat it up. If a lawyer walked in, he'd greet him with "avvocato!" Luciano augmented his tips by selling cocaine. He'd complete his transactions with prominent lawyers and other local luminaries in the men's room. He was in and out of it all night long. The manager, Joe, liked coke too, and didn't mind. Everybody loved Luciano.

Everybody except another waiter named Scott, and one night I had to separate the two of them when they were in a shoving match. Luciano was drunk, as he always was late in the evening, and had said something to the hostess that Scott took exception to. All in a day's work, I thought.

Luciano would drink about eight glasses of Orvieto every dinner shift. He’d order the white wine from me, putting the charge on his customers' bills. His customers either didn't notice or didn't care, because he did it every single night without incident. His outsized personality added so much to their dining experience that they probably looked at it as a bargain. I would have too. He was that good.

Joe was a great manager, though hardly politically correct. He’d jokingly refer to one ostentatiously effeminate bartender as "Freddie the fag" behind his back, although he didn't really mean anything by it. Joe got transferred to L.A. though, and someone else came in. I didn't like her, and knew I'd have to leave. One night, she had some sort of beef with me and asked me to come to her office the next day. I skipped the meeting, and when she asked about it I told her I was quitting anyway. She said it was no big deal, that I didn't have to quit, but I was done. Done with that place and done with bartending forever.