Learning I Have a Father

I’m not sure who he was, or why my mother left me alone with him. 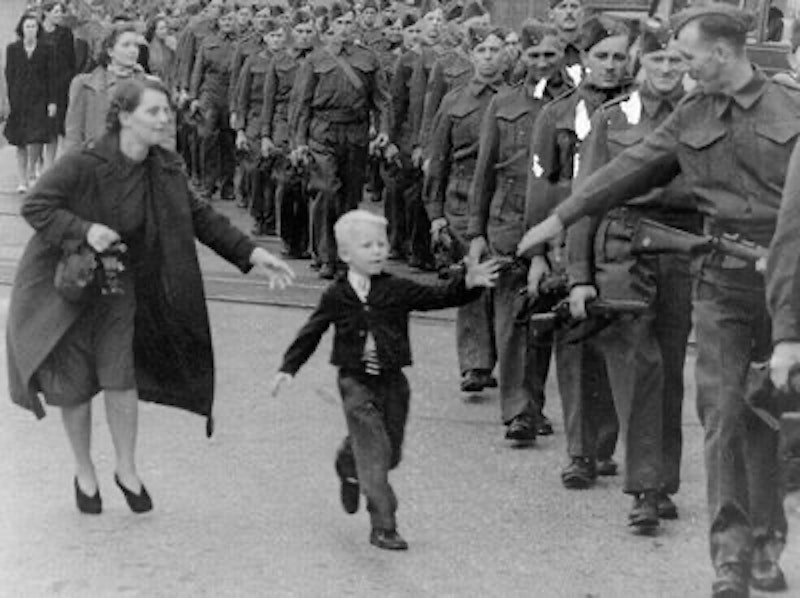 When I was barely 15 months old, with WWII raging, the U.S. Army realized it was running out of men to fight Nazis. So they drafted my 35-year-old father on May 17, 1943. Despite years of experience selecting suitable men for the armed forces, they failed to recognize their mistake—expecting my father to fit in. He was shy, quiet, compulsively organized, painfully neat in everything from bodily habits to the clothes he laid out each night to wear the following day for work at Plaza Decorators in Queens where he was an expert upholsterer. My father, who left our bathroom early in the morning after his shower, his towel folded in perfect thirds, the bath mat smoothed, not a drop of moisture on the floor, as if an angel came, washed and left without anyone noticing. If open latrines, shared showers, and meager belongings squeezed into a metal locker failed to demoralize him, would he make it into deployment? Since no one in the army asked his opinion, my father left work, home and family to serve his country.

When he arrived in Camp Claiborne, Louisiana, he performed diligently and loyally, marching with his platoon while his fair skin blistered in the heat, and his body, sturdy from swimming and soccer during his 20s in America, served him well until one day. In a shaded swamp filled with a billion varieties of bacteria, a select few managed to find their way through murky water and layers of foliage, beyond my father’s fatigues, through his heavy cotton socks, up his legs to his knees, and onto his hands. Army medics applied palliatives—salves and lotions—promising the infection will disappear. Two months later, the skin on his feet, toes, legs and arms from the elbows to his fingertips turned bright red and flaked off. They sent him to Harmon General in Longview Texas, a local VA hospital where doctors gave up on the possibility of ever curing him.

Six months later, he was shipped to a VA hospital on West Kingsbridge Rd., in the Bronx, closer to his family. It is the U.S. Army’s final holdout for Andrew Santo, Private, lost cause, 361st Engineer Regiment. Whatever they tried had little effect on his condition, until one day a doctor suggested he soak his hands and feet in buckets of water mixed with potassium. Though his soaked body parts turned purple, the color of potassium, his condition improved. My mother visited him faithfully, with me in tow. I remember the enormous, beautifully soft, green grassy lawn where my father’s hospital friend, Mickey, who was injured in the Navy and wore a white sailor’s cap, played running and chasing games with me. I don’t remember seeing my father, perhaps children weren’t allowed into the hospital, but once he received his discharge, my father bought a sailor cap exactly like Mickey’s, and wore one throughout his life.

After six more weeks, the potassium soaks cured the infection but left my father’s skin on those parts of his body scarred in translucent, scalloped designs. On August 30, he received an honorable discharge.

During his basic training, my mother struggled to live on my father’s army pay of $115 per month, which he promptly sent to her so she could feed the two of us and keep our Parkchester apartment rather than move into the Quonset huts built by the government along Castle Hill Ave. During his hospital stay in Longview, Texas, he received an additional pension of $20. This was increased to $34.50 until he received his discharge papers where his character was listed as “Excellent,” his physical condition as “Poor.”

Growing up I used to stare at his scarred arms and legs, afraid to think how they would feel to touch.

The first time my mother left me alone with my father, I wasn’t yet two years old. As soon as she disappeared out the front door of our apartment, I threw myself on the floor on the exact spot which took her away, and cried hysterically. When the person invading the home where my mother and I happily live tried to calm me, hold me, talk to me, I screamed louder. I wasn’t sure who he was, or why she left me alone with him. Even if she explained it, and I’m sure she did, it made no difference. At 22 months old, the concept of paternal relations doesn’t register. It takes elementary school at P.S. 106 where many of the kids describe a similar fate for me to understand.

Donald Rosen, who was my second-grade boyfriend, and had the answers to everything, said, “It was war time.” The same exact thing happened to him. “At least your father came home. There are kids in this school whose fathers never did.”