My mild obsession with pennies. 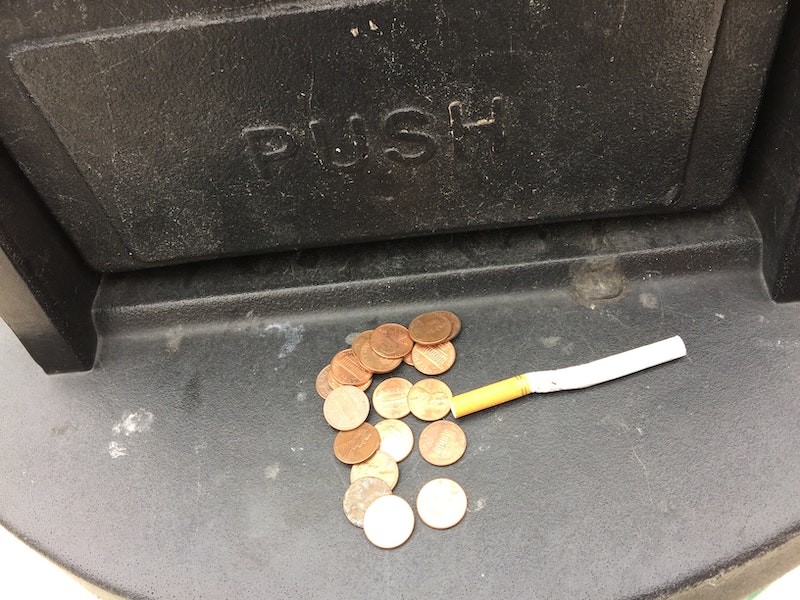 “You probably wouldn’t even bend over to pick up a penny on the street,” my beet-red mom said during a sit-down with my dad one night in late-December of 1970. I’ve nothing but fond, loving memories of my mother—who passed away in 1983—but Eccentric was her middle name. The occasion for this ludicrous summit (and I wasn’t even high!) was a stern—although my dad surreptitiously chuckled a few times at her bombast—lesson in finance. I was 15. Two days earlier, I’d taken the $25 Christmas present from my parents, rode a bus to the Walt Whitman Mall outside Huntington, New York, and bought a cool mock-suede jacket at a long-forgotten retailer. It cost $22 and was on sale.

When I got home, mom, inspecting the purchase, went straight into the gutter with a tirade about my complete lack of sense when it came to money. After all, didn’t I have several jackets? Yes, I replied, but one, it was a gift that I assumed could be spent as desired; and two, I wanted something that was mine, as opposed to a rack of hand-me-downs from my older brothers. That went right past her, and while I understood she was a Depression child, it’s not like I didn’t have any number of jobs—shoveling snow, mowing lawns, babysitting—to make money. The breaking point came when she said I should’ve deposited the $25 in the bank for my “college education.” I snapped, said something sarcastic, and was promptly banished to my bedroom for an indeterminate sentence. Grounded. Frankly, then, like now, confining a teenager to sleeping quarters wasn’t exactly hard time: although the record player was downstairs, I had all my books and magazines there, and was given the privilege of a dinner consisting of more than bread and water. Probably the worst part was there was no phone in my room, so it was impossible to commiserate with buddies.

As she often said, in various contexts, mom’s outburst “really took the cake.” My brother Gary was home from college for the holidays, and naturally he got a huge charge over the brouhaha—it was comical, although dark humor in my mind—and he suggested, while cracking himself up, that I wear black & white striped shirts to signify my status as a jailbird. I rarely got into trouble with my parents—this was an anomaly—and as a teen in 1970, it goes without saying that my possible offenses were far more actionable than the Walt Whitman caper. Really, just two months earlier, I came home around midnight, high as Timothy Leary on excellent mescaline, slipped into the house, nervous that my parents were still up, but negotiated the requisite chit-chat like a pro. That could’ve gone quite badly, but didn’t, and, in the parlance of the day, it blew my mind that all this fuss was over a new jacket. That was on sale!

Although I was hot as a hornet those 45 years ago, my memory of the tussle has long mellowed, as I was fortunate in having two splendid parents, and four older brothers whom I was attached to. It wasn’t exactly a Leave It to Beaver upbringing—the 1960s interfered—but not far off.

And, to this day, I do pick up pennies or loose change on the street or sidewalks, indoctrinated at a young age, I suppose, by Ben Franklin’s adage “A penny saved is a penny earned.” (Whether he actually said those words is a minuscule debate that still simmers with bored historians.) I don’t know many people who follow suit, mostly because a penny by itself is nearly worthless (unless you find a rare “wheat cent” that was no longer minted after 1956), but found money is found money. Which brings me to the picture atop this page. Earlier in the week, outside the local CVS on N. Charles St., I was chucking a coffee cup in the trashcan and saw the dozen or so pennies—and a ragged Marlboro 100—and was surprised no one had grabbed them. Not wanting to be greedy, I let them sit, but curious, I returned in an hour and they were still there. I pocketed the pennies.