NYT has no problem with publishing a female reporter's private conversation. 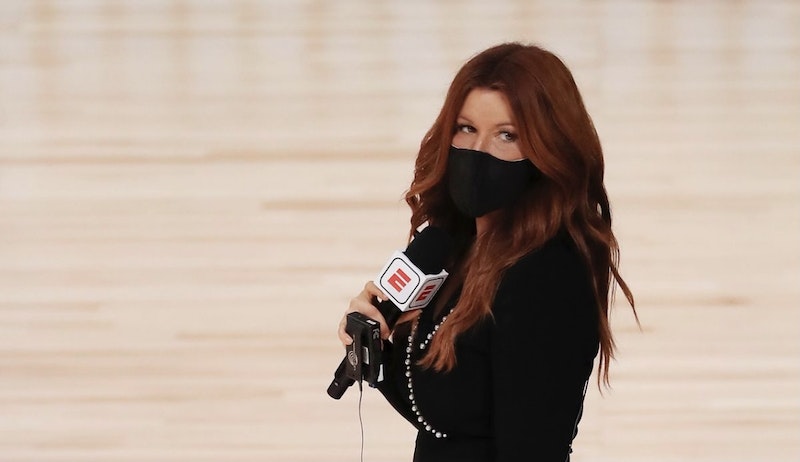 The New York Times has reported that ESPN star Rachel Nichols, who "is white," suggested that a colleague and rival, Maria Taylor, was slated to take her job "because she is Black." Nichols made her comment in what she believed was a private, three-way phone conversation from her Florida hotel room with Adam Mendelsohn, an adviser to basketball superstar LeBron James, and James’ agent, Rich Paul, a year ago after finding out that she wouldn’t be the sideline reporter for the 2020 N.B.A. finals, a job that’s in her contract. The emotion Nichols expressed at that time may now end her career.

Nichols said in the same conversation: "If you need to give her more things to do because you are feeling pressure about your crappy longtime record on diversity—which, by the way, I know personally from the female side of it—like, go for it. Just find it somewhere else. You are not going to find it from me or taking my thing away." Her "thing" was hosting ESPN’s pregame and postgame shows during the playoffs and finals, a coveted job.

Nichols, a successful woman in a male-dominated field, criticized her employer, ESPN, for what she believes is its poor diversity record regarding women, and now the sports network's going after her for being racially insensitive, even though it's known about the phone conversation for a year. ESPN removed Nichols from any role as the sideline reporter for this year's NBA Finals after the Times story came out.

Nichols was unaware that the video feed set up in her room for remote filming of her ESPN show, The Jump, was still running while she discussed the matter. An unidentified ESPN employee, in an attempt to discredit her, recorded the 30-minute video feed on a phone, edited it down to four minutes, and disseminated it throughout the cable channel. The clip eventually made it to a Deadspin reporter, although it's not clear who sent it. Whoever it was made the assumption that Deadspin would be eager to participate in the dismantling of Nichols, but Deadspin, to its credit, condemned the leaking of the conversation, and refused to divulge its contents, pointing out that both Florida and Connecticut (where ESPN’s headquarters are located) enforce a legal requirement that both parties to a phone conversation must agree to it being recorded.

The Times, which called this affair a "scandal," had no such ethical compunctions. The paper also reported that Nichols laughed after Mendelsohn, who's white, said, "I don’t know. I’m exhausted. Between Me Too and Black Lives Matter, I got nothing left." This was a woman who was secretly recorded alone in her hotel room.

Nichols was forced to apologize for the "hurt" she caused Maria Taylor, but the person who actually caused the hurt by possibly breaking the law and taping that conversation is the one who should apologize. ESPN has not fired Kayla Johnson, a digital video producer for ESPN who admitted to her HR department that she sent the video of the Nichols conversation to Maria Taylor. Nichols has tried to apologize to Taylor, but Taylor refuses to speak to her.

Let's not forget how willing ESPN is to throw its employees to the wolves. In 2017, the network fired tennis announcer Doug Adler after he was falsely accused of making a racist statement against Venus Williams. Two years later, ESPN paid a settlement to Adler to avoid going to trial in his lawsuit. The New York Times assisted in the destruction of an innocent man's life (Adler subsequently had a heart attack, in addition to becoming unemployable and tarred as a racist) in that its tennis reporter, Ben Rothenberg, implied on Twitter that Adler had called Venus a "gorilla" when, in fact, he was referencing her "guerilla" tactics on the tennis court. The Times never ran an article on Adler's sacking, as it would’ve put the newspaper in an uncomfortable position.

The Times reported that several black ESPN employees said Nichols' comments further cemented their belief that white people at the network who’re supportive publicly don’t act the same way in private. But it's naive to expect that someone who thinks she's losing her job is going to use "correct" language in a private conversation. Once again, we're reminded the Times is willing to participate in wrecking someone's life to promote the narrative that its younger staffers insist upon.