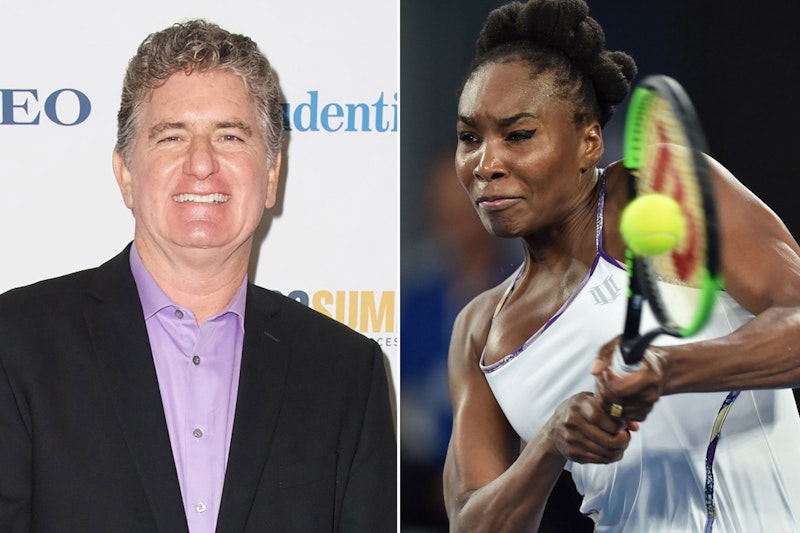 Oliver Brown, Chief Sports Feature Writer for the Daily Telegraph, recently tweeted: “The preposterous case of Doug Adler being dismissed by ESPN as a racist, based on a reckless, inaccurate tweet from a New York Times freelance tennis reporter, has been resolved—in near silence.” Brown’s correct about the Times’ contributor's unconscionable tweet and the strange dearth of media coverage of this tawdry affair from beginning to end, but why doesn't he mention the tennis reporter's name? The public has a right to this information.

The reporter in question is Ben Rothenberg, who tweeted that it was “appalling” ESPN announcer Adler had called Venus Williams a “gorilla” at the 2017 Australian Open tournament, when in fact Adler was referring to her “guerilla” tennis tactics. Rothenberg continued, “Horrifying that the Williams sisters have to be subject to this in 2017.” The ignorant, reckless tweet, coming from a “respectable” source, whipped a clueless, bloodthirsty Twitter mob into a frenzy. ESPN fired Adler, even though he claims one exec told him, “We all know what you meant.” Before cutting Adler, ESPN made him issue a public apology.

Doug Adler has won a two-year battle to get his life back. Deciding it didn't want to go to trial, the sports network paid the former USC All-American tennis player and one-time touring pro an undisclosed sum and left the door open for him to return to the broadcast booth. He's trying to put the past behind him, but he'll still have to deal with the aftereffects of the heart attack he suffered, which his doctor told him was related to the stress of his public ordeal. It's not easy to find employment when a Google search of your name suggests you're a racist.

ESPN has all but apologized, paid him money, and taken him back into the fold, but what price has Ben Rothenberg paid? He's still writing for the Times because journalists like Oliver Brown won't put his name on Twitter. We're right in the middle of a call-out culture that seeks to wreck the lives of perceived transgressors, but the tennis media won't criticize one of their own who made a damaging, false allegation against another member of the tennis community. Why did they choose to abandon one of their own when he desperately needed their support, while remaining silent about Rothenberg? Perhaps it's as simple as Rothenberg sits with them in the press tent while Adler's in a broadcast booth. Regardless of motivation, the tennis media have shamed themselves and revealed their cowardice.

The tennis media acted like cops when they know a fellow cop's guilty of serious professional misbehavior—they looked the other way. Rothenberg, a “benchwarmer” on the NYT tennis coverage team who specializes in fluffy articles, has a history of scalp hunting. He went after prominent tennis writer Neil Harman for plagiarism and Harman lost his job as the writer of the annual Wimbledon Yearbook. When Rothenberg tweeted his “exposé” to his followers, he used the words “my investigation,” even though Private Eye had already broken the story.

But implying your media colleague's a racist without even bothering to ask him what he meant so you can be the first to break the “story” and make yourself look like an anti-racism crusader makes Harman's offense seem trivial. Once accused of racism, most of your life options disappear. If the tennis and sports media have been waiting until the issue was settled legally, then now's the time to speak up, but nobody will. The New York Post's Phil Mushnick, one of the few sports reporters who stood up for Adler, just wrote this: “Two years ago, while serving as an analyst at the Australian Open, Adler was suddenly fired after a tweet claimed Adler, on ESPN, had just called Venus Williams, for no given reason beyond uncontrollable racism, ‘a gorilla.’” “A tweet”? Why on earth not, “A tweet from New York Times tennis reporter Ben Rothenberg”? That's news! “A tweet” doesn't get someone wrongly fired from ESPN.

One factor at play is that in today's twisted world, someone who gives the appearance of trying to fight racism gets a pass if they make a mistake and call out the wrong person. Because their heart's in the right place. No. There’s no reason to believe Rothenberg's heart has ever been the right place on this matter. He's got a “cop” mentality. With Adler, perhaps he saw the chance for another takedown, which could also serve to put him back in the good graces of the Williams sisters after he himself was accused of racism and sexism after writing a piece about Serena Williams’ body type for the Times. Adler had a coveted position that perhaps the reporter wanted to free up for himself or a friend. Any of these explanations is more plausible than believing that the reporter actually thought a college-educated ESPN announcer with no history of racism had intentionally committed career suicide by calling Venus a gorilla on national TV.

I don't back the trend of automatically firing people who've misbehaved, but it's disgraceful that the Times continued to pay Rothenberg after he never retracted the Adler tweet. He shouldn't be writing about tennis for any respectable media outlet. Had Rothenberg been driving drunk and hit Adler, hospitalizing him for a month, he'd have done less damage. He'd also have been prosecuted.

It's cowardly that the Times has never covered this story. Not “fit to print” when your own writer's a major figure in it? Adler will now return to a tennis world that shunned him while declining to discipline his attacker. John McEnroe, the great truth teller, said nothing. Martina Navratilova, the esteemed crusader for social justice, attacked Adler after ESPN fired him. She didn't bother to call him first, of course, but will she say something now that he's been vindicated? The chances are slim. A story like this is an x-ray for character flaws.