Let nature occupy my territory for once—it’s not even mine to begin with. 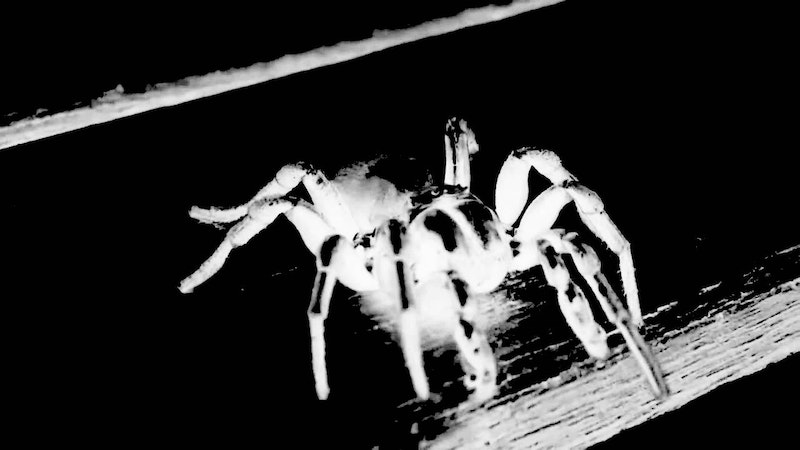 A spider hung on the ceiling above my kitchen sink. It was probably there for days, but I only noticed it last Thursday. A similar spider used to hang in the upper corner of my bathroom. It might’ve been the same spider. They certainly look alike: long, thin legs protruding out of a tiny brown body that’s a little bit longer than most daddy long-legs I’ve seen. I took a picture and sent it to my friend, a biologist who specializes in spiders. He said it was a Pholcus phalangioides, better known as a long-bodied cellar spider.

Cellar spiders like to dwell in spaces where there's not a lot of light and the temperature is around 50 degrees, like basements, caves, and under stones. When one gets inside a house, it makes webs in the corners of ceilings. They don’t bother anyone; they’re good for pest control since they eat small insects and other spiders. I decided this new spider settler can stay for a while.

The spider was gone the next morning. In its place were a tiny spider—leftovers from last night’s dinner, no doubt—and fragments of its web. I started missing the spider until I saw it in the opposite corner of my studio apartment ceiling, minding its own business. Normally I don’t care about insects until they get into my apartment, and then they must die. It’s my small part in contributing to the proud American tradition of protecting one’s God-given private property from outsiders, even if the outsiders were here first.

White people in particular love to dominate other people’s land. The Nanticoke were one of the many tribes that originally inhabited the Delmarva Peninsula, where I live, living peacefully off the land and Chesapeake Bay until Captain John Smith arrived in 1608. At first, the Nanticoke developed a relationship with the British explorers through trade, but the increasing number of English settlers took a huge toll on the Nanticoke’s food sources.

Despite signing a peace treaty in 1668, the settlers continued taking land from the natives, sometimes forcing them to leave by destroying their villages. Maryland eventually gave the Nanticoke a reservation in the early-1700s but they couldn’t leave in order to hunt during the winter. When Maryland did give the Nanticoke permission to hunt outside the reservation, settlers took over their land.

I don’t know why we white people love dominating land, but it probably had something to do with religion. One of God’s first commandments to Adam was, “Rule over the fish in the sea and the birds in the sky and over every living creature that moves on the ground” (Genesis 1:28). A few chapters later, God promised Abraham and his descendants a land of their own, which happened to be where the Canaanites were already living. Liberal Christians point out that God also commanded Adam to take care of Eden (Gen. 2:15), but that doesn’t matter. Christians only pay attention to the verses that agree with them.

Indigenous people have a different relationship with nature. I once saw Nanticoke cultural historian Daniel “Firehawk” Abbott at an outdoor event giving a presentation on the ways of his people. He demonstrated how powerful ancient Nanticoke tools were by chopping a nearby tree. Before making the first chop, though, he placed a small bit of tobacco at the base of the tree as an offering. “Before we take life,” he said, “we give an offering of thanks to the Great Earth Mother, who gives life to all.” He wanted us to remember to never take nature for granted.

Humans are great at taking nature for granted even if it kills us. The World Weather Attribution says climate change contributed to the recent heat waves. “If the world warms another 1.5 degrees Fahrenheit,” the New York Times reports, “which could occur this century barring drastic cuts in greenhouse-gas emissions, similar events would not be so rare, the researchers found.” Last week the Gulf of Mexico was on fire thanks to an undersea pipeline breaking. None of this is new, but no one seems to know what to do. YouTuber Anita Sarkeesian recently criticized an old CNN article about what individuals can do to stop climate change, saying that the onus is on corporations and governments to do something. Why not reduce our own carbon footprints and pressure the powers that be at the same time?

The spider has settled in a new corner of the apartment—a darker corner where hardly any light reaches it—and seems to be happy there for now, catching prey and leaving the leftovers hanging on the web. I’m going to leave it alone for now. Let nature occupy my territory for once. It’s not even mine to begin with.