The hour of parleying is dangerous. 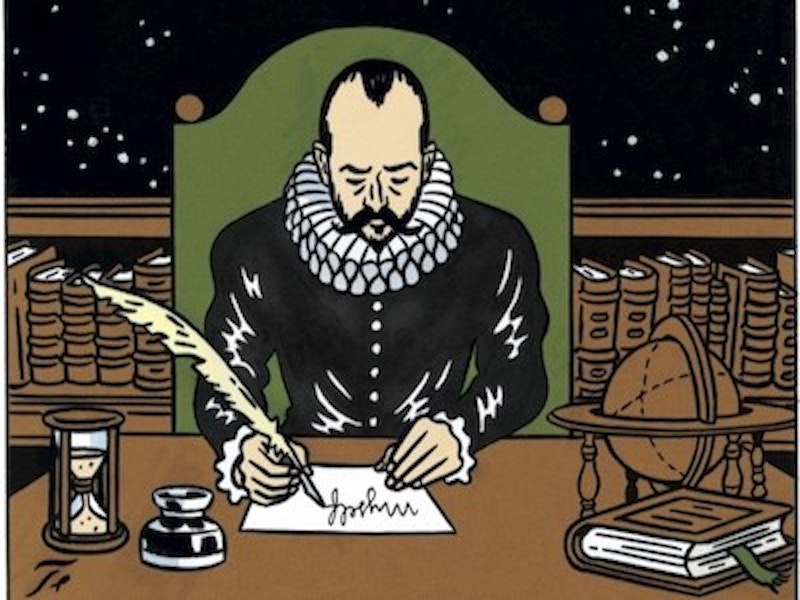 The Montaigne Project is my new column at Splice Today. It continues work that I began on my blog, The Kugelmass Episodes, where I was rewriting and reimagining each of Montaigne’s essays (Fr. essais, “attempts”) as pieces of modern thinking. The relevance of Montaigne to our age of “blogs, tweets, tubes, spaces, faces, pages, and pods”—to quote Montaigne’s best and most recent biographer, Sarah Bakewell—can hardly be overstated.

Bakewell continues: “This idea—writing about oneself to create a mirror in which other people recognize their own humanity—has not existed forever. It had to be invented. And, unlike many cultural inventions, it can be traced to a single person: Michel Eyquem de Montaigne.”

I’m starting where I left off, when I was stymied by Montaigne’s second consecutive essay on siege warfare, “The hour of parleying is dangerous.” Montaigne’s essay, which might seem remote now, is about the risk of being invaded and conquered while you are negotiating a truce. He writes of Mussidan, a nearby French city, “During the negotiations for an agreement, while the proceedings were still underway, they were taken unawares and hacked to pieces.” This is, apparently, a result with a fairly lengthy precedent: “During a parley, while the citizens of Casilinum were dithering over their sureties their town was taken by surprise.”

Like most masterpieces that seem comfortably distant now, this is actually uncannily close to our present situation. While we dither over our sureties, global warming is already wreaking a vengeance on human activity and human life. Our losses will only increase. To future generations, as I have noted before, our present era will seem like a bewildering period of… hesitation, greed, and little else. There’s nothing really left to negotiate, and yet the band plays on.

Anybody who’s been in therapy will recognize the phenomenon Montaigne describes on a different level: it’s the story of the psyche’s most troubling and persistent phenomena. Childhood, for instance, is really a narrative that’s imposed upon us while we’re learning how to speak about our lives. The work of therapy becomes rebuilding the sacked city that we’re forced to live with, unconsciously, far into adulthood.

Culture is also a siege that we‘ve always already lost; I’m thinking of Aquaman, the movie that I walked out on when it was in theaters, yet which became a massive hit nationwide (as well as internationally). Titus Techera scolded me for being so negative about Aquaman, basically on the grounds that it was too successful to dislike. It’s easy enough to respond to that kind of jab with stories about lemmings jumping off cliffs and fads that quickly fade—which is exactly what Aquaman (already for sale at a discounted price) is going to be. But I admit that Techera has a point. Aquaman is too big to fail. The role of the critic is not merely to quarry, as Matthew Arnold would have it, a “current of fresh and true ideas” from the junk in the artistic mainstream. It’s really to understand what it means to be alive in the midst of our culture as it is now. To write well about Aquaman means to embrace its bizarre magical thinking, in which a motherless man-boy comes to terms with the biological fact of his birth by swimming into the Earth’s womb and pulling out a phallic trident while riding a giant octopus. (Yes, I’ve now seen the rest of the movie.) I’m happy to say that this coming-to-terms with one’s primordial origins somehow makes up for every environmental crime committed against the world’s oceans, averting Atlantis’ planned war of revenge.

In other words, let’s say you accept Nietzsche’s dictum that saying yes to a single moment in history means saying yes to all of history, including its nightmares and catastrophes, since things are so irrevocably intertwined with each other. That means that embracing the best of culture—Moonlight, Lady Bird, and Black Panther—means embracing the idea that, in some sense, Aquaman had to be created. It also means embracing anything about the future that we can’t now hope to avoid.

Thus the greatest work of “criticism” that our age will produce is one that comes to terms, not magically but morally, with the creeping reality of global warming. In some sense, we have to embrace it. It’s our well-deserved close of day. When climate change becomes real to us, through a shift in our culture, we will look around and see our world the way Yeats saw his, after Easter 1916:

Being certain that they and I

But lived where motley is worn:

All changed, changed utterly:
A terrible beauty is born.

—The Montaigne Project will return every Thursday on Splice Today.