What does a horde of frost zombies have to do with global warming? 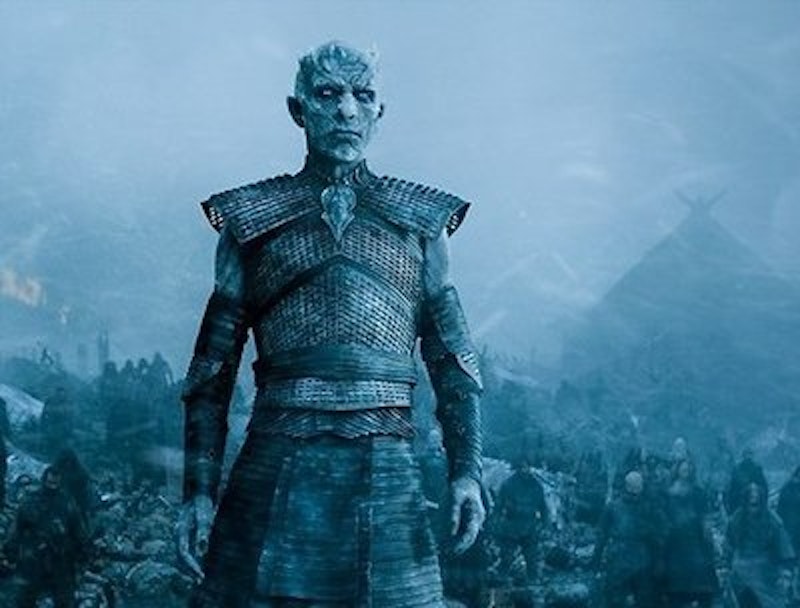 “Winter is coming.” This is the quotation that I’ve used as the headline for my personal blog, and more recently my Facebook page, for several years. It comes, of course, from Game of Thrones, where it’s the official motto of the prudent and unflinching Stark family.

The irony of this headline is that I don’t think winter is coming; in our world, the greatest planetary danger is the apocalyptic disruptions of human life that might come about because of global warming. So in trying to understand the appeal of Game of Thrones, as a cultural phenomenon that’s more than just another generic zombie apocalypse, I had to ask myself how global warming actually mapped onto the creeping white death that frames George R. R. Martin’s multi-part “Song of Ice and Fire.”

Now, the weather is actually the least difficult part to account for. You don’t have to be a licensed Freudian psychotherapist to see how a long “winter” could represent, as panic in disguise, fears about the terrible, unending summer we risk bringing about on Earth. That’s particularly true given the occasional scenes of the great Wall melting, like a polar icecap, and the various icy disasters to which climate change has given rise. (For example, in Connecticut, where I lived until 2016, the so-called “polar vortex” created by warmer Arctic weather produced blizzards and 12 ft. snowdrifts.) Some climatologists have even predicted that “global warming” might lead to a sudden ice age, an apocalyptic scenario portrayed in The Day After Tomorrow.

More interesting, though, are the White Walkers. The Walkers are the cold, personified. Their initial territory is the remotest snowy region of Martin’s world, where some of them have waited out 1000 warmer years doing the zombie version of cryogenic hibernation. They are white and blue in color, and vulnerable to “dragonglass,” the GoT term for obsidian (which, in real life, comes from volcanoes). So what does this horde of frost zombies have to do with global warming?

There are two compelling answers. The first is that they are the specters of a refugee crisis. Global warming will produce refugees in untold numbers, as people of every nation flee receding coastlines and natural disasters. This crisis is already foreshadowed by the wildlings, who (as it were) pound on the door into The Seven Kingdoms, and are granted admission by its reluctant border guards (the Night’s Watch). Read this way, the zombies are the “bad” refugees, the ones who overwhelm whatever camps and charities can provide them with shelter, and who come from countries or regions we care less about. They’re the refugees who force their way in, to be regarded with fear and hatred, much as some Americans regard undocumented immigrants from Mexico. In a clear parallel with contemporary conversations about immigration, the commander of the Night’s Watch tells his (mutinous) second-in-command that the wildlings must be allowed to enter without restriction: “If we leave them out there, you know what they become” (emphasis mine). Indeed. They become Cubans paddling desperately towards the Florida coast, or Syrians in a time of rampant Islamophobia.

The second is that they are the “undead” specters of past and current generations, living in industrialized nations and producing the greenhouse gases that will engulf our children and grandchildren. Like most zombies, the White Walkers add to their numbers by converting living humans into the undead. Unlike most zombies, the Walkers don’t have a contagious bite. They have to kill someone to raise them. In other words, they’re the already-dead who won’t go away: the terrible environmental legacy of climatic chain reactions that could prove impossible to reverse, even if greenhouse emissions fall to nothing.

While George R. R. Martin has only gotten through A Dance with Dragons, and HBO is only on Season 7 of the television series, certain things are abundantly clear. It’s clear, for example, that Daenerys Stormborn will eventually rule the Seven Kingdoms (and the Andals, whatever those are). What most clearly marks her out as the future leader of humanity is not her Targaryen bloodline, which didn’t help her brother any, but her magical and portentous sympathy with dragons, which allows her to survive any kind of heat undamaged, and to hatch living dragons from seemingly fossilized eggs. These are the very dragons that must eventually range over the hordes of White Walkers, reducing them to ash.

Daenerys’ magical immunity is linked, in both the novels and the show, and the larger phenomenon of magic of every kind returning to the world. The White Walkers used to be legend; now they’re menacing realities. Religion, once an earthly mixture of ceremony and morality, has turned rife with magical potential. Melisandre summons a deadly shadow; the trees in a sacred wood begin to weep. But the blossoming of magic within Martin’s fanciful religions shouldn’t distract us from the symbolic meaning of magic in his novels, where it stands for religious belief. Daenerys, as a leader dipped in magic, represents the salvation of humanity through a renewal of faith at the 11th hour, on the Day of Judgement. Like Orson Scott Card (The Folk of the Fringe), Cormac McCarthy (The Road), and many others—including, arguably, John of Patmos—Martin imagines the apocalypse as an ideal stage for a long overdue rebirth of faith.

Upon such rocks, then, George R. R. Martin has built his church, selling millions of copies of his books and helping to create the most recognizable TV series of its time. There’s just one problem: the apocalypse never comes. Martin’s anti-religious sentiments, and his rollicking humanism, are at war with his mystical vision of Robert Frost’s fire and ice. Concretely, this inner schism manifests as a ludicrous degree of attention to realistic detail, which fractures the series into an impossible kaleidoscope of overlapping protagonists, plotlines, and exposition. Martin has created so many separate arcs and significant threads that he essentially cannot finish what he has begun. Maybe this is good; after all, Frank Herbert’s Dune series became rapidly ludicrous after Paul Atreides’ successful theocratic revolution at the end of the first book. Maybe Martin’s obsessively branching structure is his own way of holding his worst novelistic impulses in check, all of which would come pouring out if Daenerys was ever crowned. Whatever the case may be, for now, he resembles nothing so much as a comic version of Scheherazade, busily and successfully using a geyser of stories to fend off a winter that may, as a result, never arrive (in full force) at all. The subset of his readers who share his apocalyptic hopes may in the end be disappointed. Let us not pity them. Here on Earth we don’t have dragons, but we do have every reason to expect our world will nonetheless be set ablaze.