The Joy of Walking Out of Aquaman 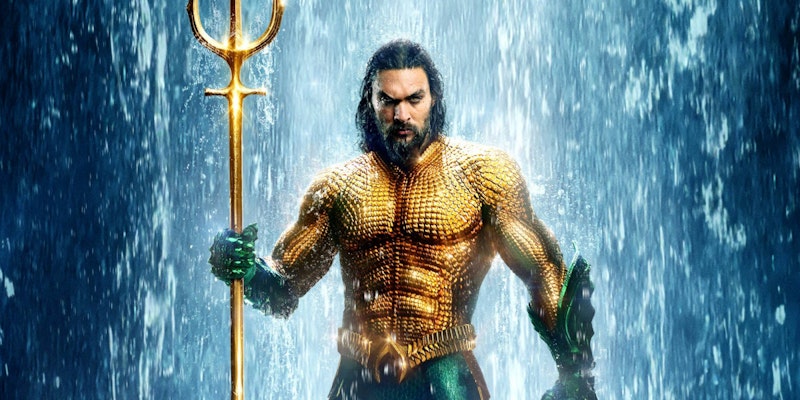 Since I’m an Amazon Prime member, I finagled tickets to an early showing of James Wan’s Aquaman last Saturday. I walked out of the film shortly after it began; my wife and I are among the first people in the world to walk out of Aquaman. Many others will follow.

I love superhero movies; I’m happy to own both Superman v. Batman and Avengers: Age of Ultron, neither of which were any good. I’m sure Jason Momoa seemed like a good choice when he was cast; after all, he’s been impressive in everything he’s done, including his star turn in Game of Thrones. He fills up the screen with muscles and sneering power, especially as shot by Wan, who apparently ordered the cameraman to film every scene with the camera pointing up, from the floor, so we wouldn’t underestimate Aquaman.

The problem isn’t Momoa, it’s the script, which (like Justice League) continues to imagine Aquaman as the biggest frat boy in any room, including ones with Bruce Wayne in them. He drinks, smirks, treats women with polite disdain, and slaps people on the back. There’s even a scene where he starts out grim, drinks a lot of beer, and ends up grinning and making “goofy” photo booth faces. Nascent alcoholism, folks! Nothing’s more fun than that!

Aquaman quotes Shakespeare’s Henry IV early on, apparently to suggest that this is a lovably debauched king-in-the-making. Unfortunately, we already saw that entire plot in Justice League, where Aquaman played the reluctant outsider and then, eventually, let himself be recruited. For him to already know his entire backstory, and talk knowledgeably about Atlantean politics, and still want nothing to do with Atlantis, doesn’t make him a reluctant, unripe prince. It makes him a cynical recluse whom nobody ought to be counting on. We’re sympathetic to Aquaman but feel nothing for his new allies. They want something from him they have no right to ask for.

The film begins with a cold open about Black Manta, and then a quickie love story between Aquaman’s parents, played (respectively) by Nicole Kidman and that guy who plays Aquaman’s father. He makes her tea and they fall in love; compared to, say, the opening montage for Up, the whole thing is an incredible failure. But, more importantly, Aquaman’s fast-forwarded journey into adulthood is a weak version of Wonder Woman’s girlhood scenes and the genuine pathos of watching Superman grow up in Man of Steel. When the tribes of Atlantis convene for a parliamentary discussion about undersea leadership, it’s a lifeless re-do of the tribal gatherings in Black Panther. Everything here has been done, but not under the sea—Aquaman is the superhero equivalent of Moonraker.

The redundancy’s a shame, but it’s not the only reason you can safely walk out of Aquaman without any regrets. The other reason to leave is the film’s gigantic inferiority complex. Momoa was cast, and his character was written, all so that nobody would be able to call Aquaman a pussy. He’s no charmless undersea bureaucrat—he’s a fun-loving rebel! When the Atlanteans talk, there’s a boom effect added to their voices, so that we feel impressed instead of imagining silly little bursts of bubbles and words. Their hair waves, but only slightly, so that we’re not distracted by Atlanteans who look like drowning Troll dolls. This pattern of overcompensation goes on ad infinitum.

The Atlanteans have guns, and because it’s important that they have real guns, and not just stupid oversized aquaforks, the guns are overbuilt until they look like something owned by that guy, two blocks down from you, who is really into paintball. Because it’s important that women seem powerful in Atlantean society, Aquaman’s mother destroys a small platoon of aqua-troops, flying around her living room as if she isn’t middle-aged before (immediately afterwards) deciding to surrender. Here’s an idea: if you’re going to surrender, you might try doing that first, instead of killing a dozen innocent soldiers who were just doing their Atlantean jobs.

Even Black Manta’s story is determined by the film’s anxieties about doing nothing wrong. The film is clearly worried about having a bunch of African-American villains, so it tries to generate sympathy for Manta by giving him a dead pirate father, who, like, taught him everything he knows about piracy. (Isn’t that touching?) Why, it’s not even their fault that they’re pirates! The US Navy didn’t appreciate Manta’s grandfather! Presumably for racist reasons! This still doesn’t justify the murderous life that Black Manta has chosen to lead, of course, so Aquaman beats him up (and sentences him to death) almost immediately. He’s pure malevolence, as played by Yahya Abdul-Mateeen II. We don’t care whether he lives or dies. But that doesn’t keep the film from wasting what feels like forever on Manta Sr. and his inspired final words: “You have to live, so you can kill that son-of-a-bitch!”

I’m not saying you shouldn’t go see Aquaman. Go. And, sometime in the middle of the Phantom Menace-style political scenes, walk out. You’ll find yourself on the pavement’s edge, the movie theater behind you, and your whole night ahead of you. Perhaps you live on a coast. Perhaps the ocean is near. But undoubtedly you’ll find yourself saying, like Freud quoting Schiller, “Let him rejoice who breathes up here in the roseate light!”