The Crafty Nazi Ukrainians Are Electing a Jew as President 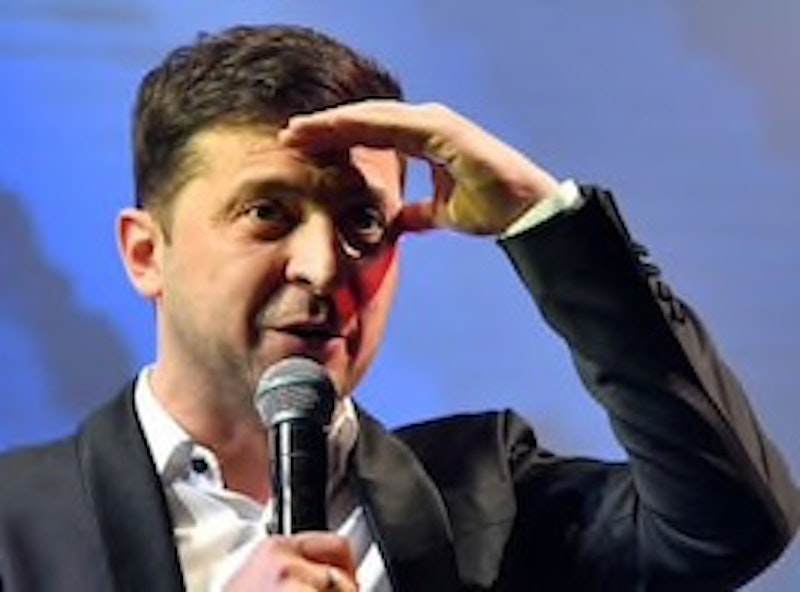 The Ukrainians—the Little Russians—have held the first round of their unclean little presidential election.

I understand that there’s a good chance that the next Ukrainian president will be a certain Volodymyr Zelensky, a Jewish television personality. His Jewishness is interesting, and an excellent indication of what our Great Russian brothers are dealing with when they deal with the wily Ukrainians. It’s just like the Ukrainians to elect a Jew as their president, under the circumstances. Infamously crafty, the Ukrainians—those collaborators with the invading Nazis of 1941; those aspirants to a fascisto-liberal NATO bent on the genocide of the Great Russian people; those worshippers of the Atlantic Council, of Anne Applebaum, of the Waffen SS—have apparently figured out that electing a Jew is in their interests, a move calculated to win the sympathy of the liberal Western Establishment.

Yes, the Ukrainians have learned the lesson of the squid, and are now fouling the waters with a cloud of stinking ink, obscuring their Nazism with a phony spectacle of tolerance; indeed, of philo-Semitism. Tolerance and philo-Semitism are, the Ukrainians have intuited, religious tenets of the Washington and Brussels power elites they’re courting. With Zelensky installed as president in Kiev and mouthing liberal and Zionist platitudes, and especially pro-gay platitudes, the Ukrainians will have ideological cover to pursue their terrible goals. These are, to start with, a continuation of the invasion of the Great Russian homeland that they commenced in 2014 with their invasion of the Donbass, and the physical extermination of the clergy of the Russian Orthodox Church, starting with Kirill, Patriarch of Moscow and All Rus.

I fear the worst from the Little Russians, and join my co-religionists in the Russian Orthodox Church, Moscow Patriarchate, in praying for Great Russia in its struggle with this threat on its southern border.

The aftermath of the Great Russian Collusion Hoax continues to be instructive. The media arm of our corrupt Establishment has just undergone its greatest disaster in the century or so since the mainstream press as we know it took shape. The usual clichés—“own goals,” “self-inflicted wounds”—are inadequate. The media has just dropped on it itself several 100-megaton neutron bombs. An exterminating winter will sooner, rather than later, be upon it.

What a funny establishment has been our dying one, the one that has ruled us since it eclipsed the old “WASP” order in the 1960s and 70s. You expect an establishment, even one you dislike, to be formidable and minimally competent.

But our current establishment is the opposite of the latter, as its lengthening list of disasters—Enron, the dotcom crash, the Iraq War, the 2008 crash, the Hoax among them—indicates. Nor is it truly formidable. It’s vicious, and it can do great damage, but only in a shrill and hysterical way that makes it ultimately contemptible and weak. We can see this now that it’s falling in country after Western country, ceding place to right- or even left-populist movements. There are in the men of our effete establishment none of the can-do masculinity that characterizes a Bolsonaro, an Orban, a Putin, a Tsar Nikolai I (O blessed be his holy name!). And therefore our establishment is capable of no dignity as it now expires.

Preparations for Easter (O HOLY PASCHA, MOST CONVIVIAL AND VENERABLE) are in progress here on our organic farm in Indiana.

I’ve been studying the ancient Russian Orthodox monastic tradition—practiced with especial zeal in the great cliff monasteries of Crimea—according to which novitiates at Easter time were encouraged to decorate, instead of eggs, the glans of each other’s penises. Tiny brushes were used by the brothers for these holy purposes.

The most credible scholars ascribe this tradition, one of the many charming traditions of Russian Orthodoxy, to the dearness of eggs at these religious sites. Needless to say, it was hard to raise chickens under high-altitude cliff-side conditions.

Now that, in the post-Soviet era, those monasteries have been again consecrated, I wonder whether this delightful Pascha tradition hasn’t been revived. The chance to see it for myself, reborn and in its vitality, is yet another reason I yearn, like so many of us Russian Orthodox faithful, to visit Liberated Crimea.