The Man Lying on the Sidewalk

And why no one would help him. 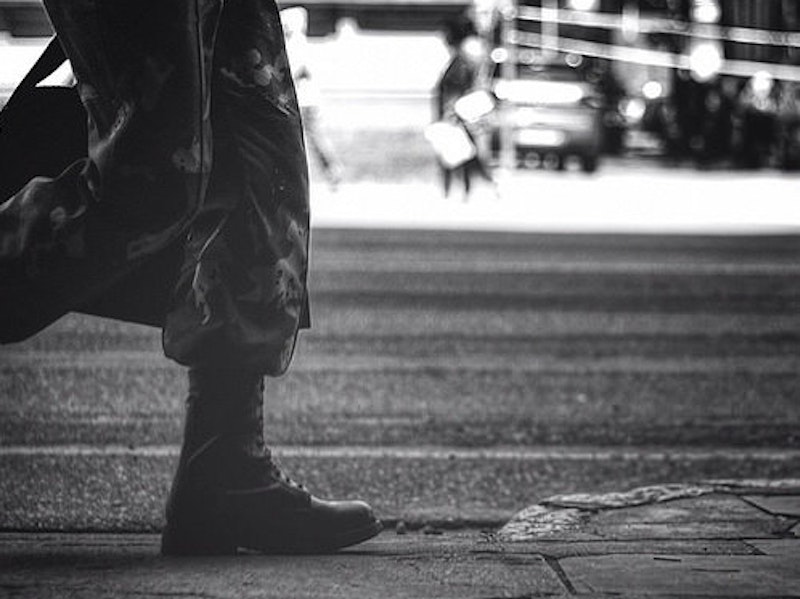 Last week I went to Ryleigh’s, Mount Vernon’s new oyster bar, in an attempt to turn my boyfriend and Emma on to raw oysters. “I’m fairly certain they can give you hepatitis-B,” he said. “Plus they look like slimy boogers,” Emma added. I shrugged and slurped another. They were fine with the happy hour-priced drinks, which we enjoyed and bantered about the athletes on ESPN. A lot of them had weird eyebrows or facial hair, we thought.

We left to walk around the tiny park across the street and peruse the eclectic reading selection at MICA’s student bookstore, wishing we could draw anything more than stick figures. We walked slowly, observing people and enjoying the evening. My only regret was having chosen to wear high heels. As the sun started to set somewhere behind the city, we began to make the way back to our block.

As we approached Maryland Ave., we saw a small group of people standing on the corner. A man was lying on his side on the pavement, looking unusually comfortable and content. My boyfriend, a medical student, jumped in to assess the situation. Someone had called 911. He was met with a skeptical look from another tall twentysomething wearing a sort of Harvard-meets-hippie outfit of a suit with sandals and Hindu bracelets, complete with a yoga mat under his arm. He suggested that they move the man, to which my boyfriend disagreed. The man could be injured or dangerous to himself or them.

Emma and I stood back, watching the scene in silence. A couple showed up, both of them doctors. The wife began asking the man questions, to which he said “Is this woman tryin’ to help me? Only worse thing’d be if she were a Democrat.” The couple laughed and asked if an ambulance was on the way. We all nodded, and they said, “He’ll be just fine,” chuckling as they left. Eventually a police officer came by, a portly man of about 60. “Oh boy,” he sighed. “What’ve we got here?” He looked at the man for a few seconds. “Hmm, I’ve seen this one before. I know you kids are all real nervous seeing a man lying on the ground like this but, I’ll tell ya, after 33 years of this shit this is nothin’.” I started laughing. The guy was a caricature. “Aha! This one here has a sense of humor. The rest of ya are just thinking ‘Oh jeez, listen to this jaded old cop’… but I ain’t jaded. I’ve just seen it all. You know why cops eat donuts?” We shook our heads. “Because ya can’t do this shit on an empty stomach.”

A fire truck pulled up next, the personnel addressed the man by his first and last name, and asked what he was doing there. “I jus’ need fifty one cent,” he mumbled as he rolled over to face them. They laughed. “He’s a frequent flyer. Look at his wrist; he’s got four hospital bracelets. We pick this one up all the time.” The man on the street groaned and explained why he was lying down. “I got hit by a bus!” he yelled. The men from the fire truck exchanged glances with the cop. “Yeah?” the cop asked, “Where at?” The man lowered his voice and said, “My eye. Hit me in my eye. I jus’ need forty nine cent.” With that he closed his eyes again. The ambulance arrived, and the cop assured us that the man would be okay.

I wasn’t sure why we didn’t walk away, like the couple and the Harvard yogini did. Something kept us there. Fascination or fear for the man’s well being. Nonetheless, it was sad to watch. The ambulance sat outside our building for almost half an hour, and I wondered what was going on inside. Was the man all right? Would he receive medical or mental treatment? My questions were all answered yesterday, when I saw him on the corner begging for change.