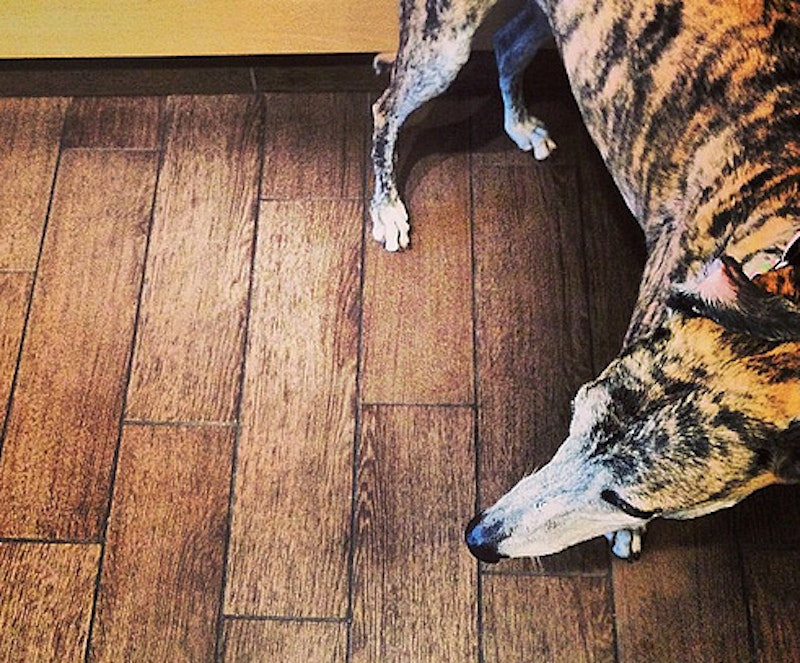 Dogs are supposed to be smarter than cats. You can teach dogs to obey commands—sit, stay, fetch, speak, roll over. It's not astrophysics, admittedly, but when you try to teach a cat to do a trick, it just stares at you. If you're lucky, and look quick, you can see the empty thought bubble popping above its head. And fair enough; when you sleep 20 hours a day, there's not a lot of need for advanced problem solving. Cats have small brains because they don't need anything bigger to get from the bed to the food bowl to the litter box and back again.

Our new dog, Sunny, does not have a small brain. He doesn't have a small anything. He is enormous in every way: 90 pounds of long lanky greyhound, all legs and giant ears. You look at that dog, and you think—here is a great, noble dog. You could fit three cat brains between those ears. He must be smarter than the stupid cat. Right?

Wrong. The brain is not, after all, especially large; the head is mostly gaping mouth, and enormous ears, and one long nose; put them all together and there's not much room for gray matter. Instead, the gigantic dogs, and all those floppy legs, seem to have been built in order to make sure that there would be room to fit all the dumb.

And still, it keeps spilling out, rather like pee. A giant greyhound pees a lot, which is not in itself a reflection on his intelligence. But his inability to control the pee—that's somewhat damning. This is a dog that, at two years old, has not yet figured out the logistics of lifting his leg. As a result, he frequently pees on his own foot. You'd think, if you were a dog, or really any semi-sentient quadruped, you wouldn't want to pee on yourself. You’d move the foot in question to a different, less pee-filled location. But no, the dog just stands there unconcerned, its paw in a puddle of its own waste, its head tilted as if idly contemplating what the cat might say, if it came outside with us for our walks. The cat would say, "reow," which, loosely translated, means, "don't pee on yourself you stupid dog."

The cat doesn't pee on itself. More, the cat knows how to open doors. When we shut the animals out of the dining room in a futile effort to eat sans begging, the dog just lies down mournfully and looks at us through the glass. It's the cat that rears up on its back legs and pulls down the handle to let itself in. At one point I thought maybe the dog might learn about doors from watching the cat; he wouldn't even have to rear up like the kitty. He could just open the handle with his teeth. It hasn't happened yet, though, and I've more or less given up hope that it ever will.

If Sunny doesn't learn from the cat, though, he at least seems to acknowledge the superiority of all that he cannot learn. He outweighs the kitty by about 70 lbs., but treats him with reverence, as a superior and potentially dangerous species. For a while there, he wouldn't walk past the cat at all; if the cat was in the hall, the dog would whimper sadly at one end until some human came to escort him safely past. He's mostly figured out that the cat won't hurt him at this point, but still watches him with awe. The cat, for his part, treats the dog with amused disdain.

I've been told that other dogs are smarter; greyhounds are bred for running and not much else. But Sunny was a crappy racer too. His last couple of competitions he refused to run, which is why they retired him. And now he's lying on his dog bed beside me. He looks pretty happy—not running has worked out for him. Maybe he's not so dumb after all.