Secrets of the Thin Man

Paul had a flash as to where this stranger in the neon vest had crawled out from under. 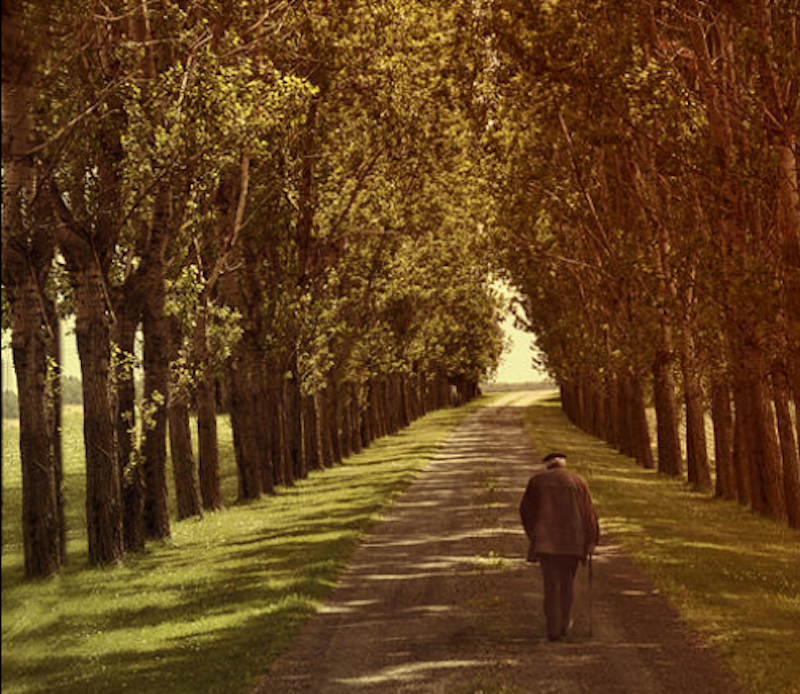 Paul was taking a walk into town, his second of the day. He sometimes notched as many as three, after which he boasted to Jean the number of steps amassed on his phone. She, as she saw him out the door on the second occasion, gravely intoned, “Be careful out there.” Like him, she’d heard the weather advisories cautioning seniors to stay indoors. But he, still one year shy of 70, considered himself above such strictures. A dab of cream to his pale white face, and he was ready to brave the worst.

He went his usual way down Locust, a gently-winding, tree-lined street with a mix of homes and garden apartments. The fearsome heat slowed his gait, but he worked at holding himself erect, ever before him the image of a string pulling him up by the hairs on his head. A visualization he’d learned in his 30s from a woman in her 80s with excellent posture.

When out for his stroll earlier that morning, before the town started to broil, he’d shared the road with others on foot—joggers, dog-walkers, train-bound commuters. A fellow oldster taking the air. Now this group had disappeared, as if by evaporation. Even motor traffic had ceased, leaving behind a leaden silence.

True, his hearing wasn’t so good, and was only growing worse over time; and so, as he was walking past the Locust Garden Apartments, under the shade of a London plane tree, he couldn’t say for sure how many times the voice behind him had tried to detain him before it finally reached his ears.

Paul stopped and turned. Chugging toward him in a mesh vest of blood-orange neon was a rotund man with a heat-reddened face. Paul, out of concern for him, motioned him to ease up, stressing his point with a cordial frown. With a chastened smile, the man obeyed, but still came on with determined strides.

Paul had a flash as to where this stranger in the neon vest had crawled out from under. He, Paul, some 30 feet back, had passed an out-of-service jitney parked at the curb in the middle of the block, its door flung open to let in air. He’d seen this jitney countless times plying Locust and adjacent streets collecting seniors by appointment. The jitney now was stopped for lunch. He didn’t look in at its open door but had no doubt that had he done so he would’ve seen this man at the wheel.

“You speak Spanish?” he inquired of Paul in a breathless voice as he came to a halt. Paul was obliged to shake his head, his high school Spanish notwithstanding. Undeterred, the man pressed on.

For a moment, the heat was forgotten by Paul. Never before had he been accosted by a total stranger with such a question. Not that he was terribly surprised. If anything, the surprise was that it hadn’t happened before this to someone like him, whose skinny body, in a country of dieters, was widely viewed as the ideal type. Year after year he watched with bemusement the diet books and diet programs flooding the markets while people got fatter. Meanwhile the doctors peddling these wares, if not exactly fat themselves, inclined toward the portly, he couldn’t help noticing.

“How do they even show their faces?” he’d grouse to Jean in bewilderment. “If people want to lose weight, they should talk to a skinny person. But do they? No. Well, tough luck for them.”

But now at last it had come to pass, and Paul wasted no time.

“Have you ever heard of the Royal Canadian Air Force Exercises?” Paul was obliged to jot down the name on a slip of paper provided by the driver, who went by Santi—short for Santiago. With growing excitement, Paul went on. “I do these every day at home, in the late afternoon. It’s five basic calisthenics—do you know that word? Calisthenics are exercises that don’t use equipment. It takes only 11 minutes to do these five. People say, ‘11 minutes? That’s no workout.’ ‘No pain, no gain,’ everyone says. But that to me is the wrong approach. When the workout is hard, we don’t keep it up. Or we hurt ourselves and can’t keep it up. That’s the beauty of the one I do. It doesn’t ask too much of me, and so I’m able to do it daily. That’s my goal—consistency. I’ve been doing these exercises 40 years without a break.”

Santi had a troubled look. “I sit all day in the bus,” he said, holding up his arms in despair.

Paul, who never preached at people, felt unleashed by the novel experience. “But you’re in excellent company, Santi. These exercises were designed for pilots, who sit all day, same as you.”

As Paul continued to preach to Santi in the otherwise deserted street, he found himself wondering how they must appear to someone chancing to glance out a window and seeing these two men conversing in the heat. Paul was certain the chance observer would never guess the situation—that finally a Jack Sprat was having his say.

Leery of overtaxing his disciple, Paul skipped over his other routines—his morning stretches, his walks into town, his weekly game of pickup softball. Instead he jumped to his eating habits, laying them down with the authority of edicts.

“Three square meals a day, no snacks, unless it’s a small helping of fruit. I make a fruit salad every night to have already to go in the morning. I start with fruit, move on to cereal, and finish with toast and peanut butter, or almond butter for a change of pace. But here’s the point I want to make. Whether it’s breakfast, lunch, or dinner, as soon as I feel the least bit full, that’s the end of the meal for me—I stop and push my plate away. My daughter is married to a Colombian man, and he now does the same at meals. ‘I’m “Pauling” it,’ he tells my daughter, and he stops and pushes his plate away."

Santi beamed at the mention of the husband. “I’m from Colombia, too,” he exclaimed, as if in Paul he’d discovered a kinsman. “Tell me, he looks like you, the husband?” Santi made a shape with his hands, indicating a narrow waist.

“He isn’t skinny, and he isn’t fat. He’s stocky, I’d say. But let me finish the point I was making. I don’t know whether you’ve heard this before, but here in this county we have a saying—You don’t have to be hungry to eat. No? You’ve never heard this? Well, this is what I fight against. Eating because it’s time to eat, and not because I’m hungry. Or eating because I’m stuck on a plane, and I’m bored. Or loading up on free food just because it’s there. At a wedding, say, or a holiday party. I say you have to be hungry to eat, and I try every day to live by these words; to come half-starved to every meal. Eat when you’re hungry and stop when you’re not. There you have my formula, Santi. It’s a very simple formula, but both these things take discipline. If I eat too much at a prior meal, I don’t come hungry later to the next. Now I have a decision to make: annoy my wife by putting it off or eat with her for the sake of peace. The days I come to the table hungry for all three meals at the normal time are happy, happy days for me. At bedtime I say to my wife, ‘What a wonderful day it’s been!’”

On parting with his new friend, Paul continued on his way with visions of penning a new kind of diet book. One with no pretensions to science but grounded instead on the life experience of one skinny layman, his full-length thin self pictured on the back cover. The book to be titled Secrets of the Thin Man. And on the dedication page the words: “To Santi.”

On returning home from his trip to town, Paul unearthed his tattered copy of the Royal Canadian Air Force Exercise Plans for Physical Fitness. He spent the next 10 minutes hunting down a quote, only to find it on the booklet’s final page: “When you start, defeat the first desire to skip a day; then defeat all such desires as they occur.”

Paul nodded his whole-hearted agreement with this advice. He’d been defeating this desire every day for the last 40 years. But that had less to do with his powers of stick-to-itiveness than with the program itself. It was not an onerous workout. He didn’t even change out of his street clothes when performing the routine. He emptied his pockets, that was all. He must remember to tell this to Santi if they ever crossed paths again. Better yet, he’d order a copy of the book and make a gift of it to Santi. How pleased Santi would be when he saw what the thin man had brought him. Paul made a note for himself on the index card he carried in his back pocket: “Order book for Santi.”

Later that night, around 10 o’clock, before going up to get ready for bed, Paul had his usual last bit of fare—a single cracker with peanut butter. As always, he performed this rite while seated. One of his rules was never to eat even the smallest bite while standing. In the kitchen especially, after a meal—while puttering about at various tasks—it was all too easy to forget oneself and peck at crumbs that fell to hand. Mindless eating, he dubbed this practice. To thwart the habit, he’d only eat while sitting. And so came the moment at the end of the night when he took his place at the kitchen table with a plate brought out to catch the drippings as he smeared a cracker with peanut butter. It was quite a production for a single bite, but he wanted to make it count. And of all the bites he took in a day, this was the one he savored most. He’d pop the whole tidbit into his mouth, close his eyes and groan as he chewed. And when he’d swallowed the last of it, he always wanted a second one. But hard experience had taught him to resist the temptation. If he wanted to come down to the table in the morning with his usual ravenous appetite for breakfast, a second helping now was out of the question.

And so it happened again tonight. He desperately craved a second helping, but in the end contented himself with licking first the plate clean, followed by the knife. And then, to put the matter out of reach once and for all, he resorted to the expedient that hadn’t failed him yet: simply put, he got to his feet.

In doing so, he thought of Santi. He must remember to give him this pointer when next he saw the jitney at rest.