What A Fiery Flying Roll can tell us about the royal succession. 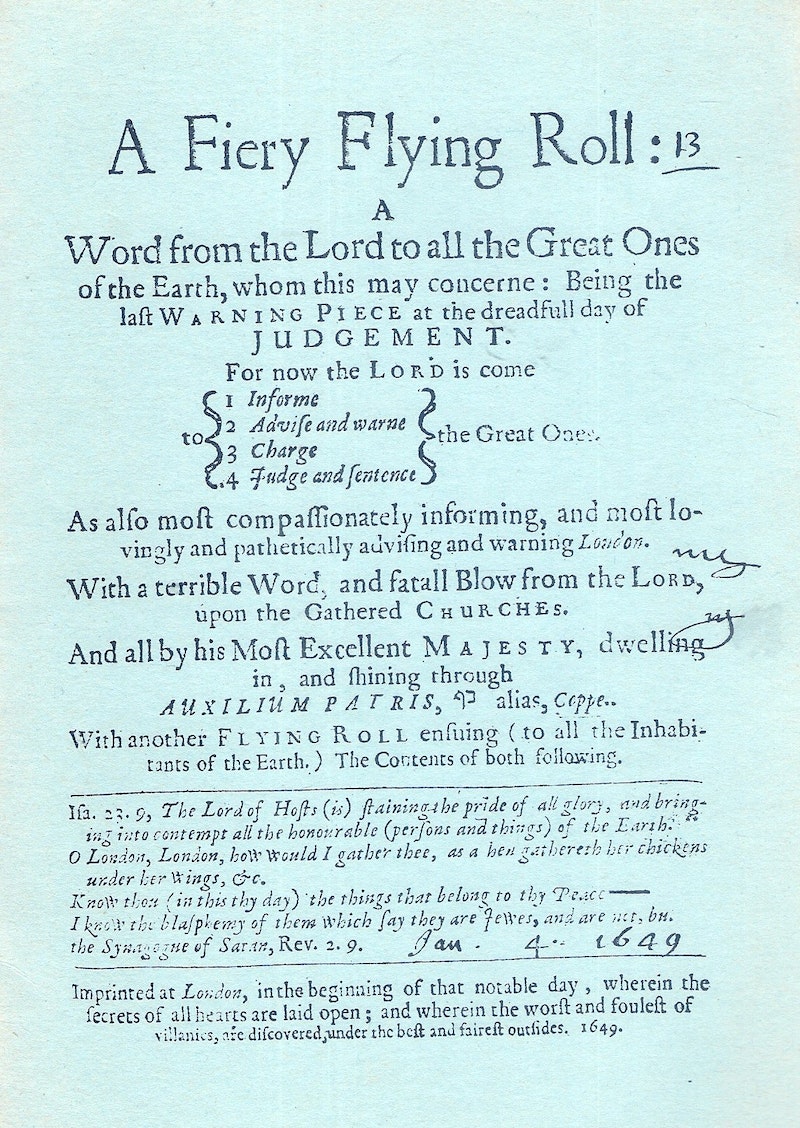 One of the most unique, strange and fascinating books in the English language is A Fiery Flying Roll, by Abiezer Coppe. Written in 1649 and published in 1650, it caused a sensation when it came out. It was discussed in Parliament, publicly burnt and led to the Blasphemy Act of 1650, which banned all such “Atheistical Blasphemies or Execrable Opinions.” Coppe spent six months in jail because of it, and was only let out, eventually, because he recanted some of its more controversial elements.

You may recognize the date. 1649 was the year that Parliament tried and executed Charles I. It was after the end of the English Civil War. The country was in turmoil. Parliament had won, but the army was stirring, filled with agitators and Levellers seeking changes in the English Constitution. The Levellers wanted a state based upon the will of the people. They wanted to extend the vote to include most male adults, while calling for equality before the law and religious freedom. In the same year the so-called True Levellers, more popularly known as Diggers, squatted common land on St George’s Hill in Surrey and, via a series of pamphlets, called for the abolition of private property. Small religious groups were popping up all over the country, radical Protestants and dissenters of various hues, from Quakers, to Baptists, to Puritans, to the Fifth Monarchists, who believed that the future king would be Christ himself, whose return they expected imminently.

It was in the midst of this that the Fiery Flying Roll appeared before a startled public. It’s unique, written in a fevered, breathless, apocalyptic style, as if the second coming was already upon us, and there wasn’t time to say everything that needed to be said. It’s also expansive, non-parochial, visionary, embracing the whole world and everyone in it.

The opening lines are these:

My Dear One.
All or none.
Everyone under the Sun.
Mine own.

The introduction is intimate, and at the same time universal. It speaks to you as an individual and yet speaks to all of humanity. It invokes opposites which have become mysteriously reconciled. It’s decidedly modern in its tone, and is like nothing ever written, before or since. The preface recounts a vision, seemingly lasting several days, in which various terrifying and enlightening things happened to the writer, including a journey to hell out of which he emerges triumphant.

“Under all this terror, and amazement, there was a little spark of transcendent, transplendent, unspeakable glory, which survived, and sustained itself, triumphing, exulting, and exalting itself above all the fiends.”

There’s also what could be understood as an encounter with the clear white light, as described in the Tibetan Book of the Dead, and a passage that reads remarkably like a description of fractals: “methought there was variety and distinction, as if there had been several hearts, and yet most strangely unexpressably complicated or folded up in unity. I clearly saw distinction, diversity, variety, and as clearly saw all swallowed up into unity.”

Almost every sentence is resonant with visionary wonder. It’s like an acid trip in literary form, and, indeed, may have been brought about by eating ergot in contaminated bread, as there was a food shortage at the time. Lots of people that year were experiencing visions, and there was talk of signs and prophecies circulating throughout the land.

There are various versions available on the internet, but I’d recommend this one as the most straightforward. I’d also advise anyone who is interested in history, politics, religion or literature to read it, immerse yourself in its strange cadences, take in its unique perspective, if only to remind yourself that what appears to be real and fixed in this world, is no such thing; that beneath the surface visions are stirring, and there are certain eternal verities laid upon us if we want to live a proper and fulfilled life.

The bulk of the book takes the form of a political and spiritual tract, in the form of a warning to “the Great Ones of the Earth.” They’re advised to bow down before the poor and the lowliest in society, to beg forgiveness and to give their wealth away. I think we can read “the great ones” to be the ruling class, both of Coppe’s time, and our own.

As he says: “Thus saith the Lord, I inform you, that I overturn, overturn, overturn. And as the bishops, Charles and the Lords have had their turn, overturn, so your turn shall be next (ye surviving great ones) by what name or title soever dignified or distinguished whoever you are that oppose me, the eternal God who am UNIVERSAL LOVE and whose service is perfect freedom and pure libertinism.”

The reason I’m thinking of it now is that another Charles is about to ascend to the throne. I’m not sure the times are quite as traumatic as we experienced in the English Civil War, but they’re heading that way. There’s no actual blood flowing, at least not at the moment, but the country is horribly divided: starting off with Brexit and continuing ever since.

The divisions surrounding the death of Queen Elizabeth II is just one more layer to the psychic civil war we’re experiencing. In this war I declare myself categorically to be a Roundhead. It’s not that I wish any of the individuals of the Royal Family any personal harm. I can understand, and sympathize with, their grief over the loss of a much loved family member, but questioning the institution of the monarchy is not the same as attacking the individuals. The Queen was Queen by historical accident, not by divine right, something that The Fiery Flying Roll makes clear.

It’s wall-to-wall royalty in our media at the moment. On the day of Elizabeth’s death all programming on the BBC that wasn’t about her ceased. Two channels were cancelled altogether, while the rest were either showing rolling news, with royalist pundits pouring out an endless stream of dreary, repetitive cliches, or artfully constructed tribute programs prepared years in advance. The same was reflected on all the other channels and across the airwaves. I didn’t turn on the TV for fear of being drowned in a wave of mawkish sentimentality.

It’s as if there’s only one possible view in our country and all others have been summarily cancelled. It’s like we’re living in a Stalinist dictatorship, like North Korea when Kim Jong-il died. No other thought is allowed in our brains. The monarchists hold total sway. All pundits are dressed in black and wear somber expressions. The only time anyone is allowed to smile is when they recall something sweet about the Queen, who, we’re to understand, is the Grandmother of the nation. We’re all supposed to be in mourning, as if a member of our own family had died.

I understand this to some degree. Famous people do acquire the status of family in our collective imagination. I was very sad when Bowie died, even though I didn’t know him. But Bowie was relatively young and still looked in good health, so his death came as a surprise. Not so the Queen, who was 96 and had looked increasingly fragile in the last few years.

A better example might be Noam Chomsky. He too is getting on, 93 now. He’s looking fragile. One thing I’ve noticed is that old men tend to stop shaving before they die. My dad did, as did Tony Benn, another culture hero of the left. Chomsky has appeared unshaven for at least a year. I’ll be sad when he passes. His has been the voice of reason in my life, the voice of sanity. But I wouldn’t demand that everyone else be sad. I’d hope for a decent hour-long program on the BBC summing up his life, and words of remembrance from those that knew him, but I don’t suppose we’ll get more than a 30-second slot on the news, if that.

To me, Noam Chomsky is much more important that the Queen, having educated generations of people into an understanding of the structures of our world, and the manufacture of consent that underlies it. The media’s lopsided perspective is obvious. An old lady who did nothing all her life but serve as a shop dummy for the looted jewelry of the Empire is given weeks of servile obeisance, while a world-famous scientist is unlikely to get more than a few seconds of passing commentary if we’re lucky. We live in a propaganda bubble. Our pundits justifiably mock the excesses of the North Korean media, and yet they do the same thing.

The Fiery Flying Roll reminds us that Britain is a nation of diverse opinions and always has been. Twenty-nine percent of the British public are in favor of the monarchy’s abolition and while the new King isn’t as universally hated as at the time of Diana’s death, his poll ratings show that he’s not adored either. The Queen was always loved by the majority of the population, and even amongst republicans there was a grudging sense of respect. She was the last living representative of the post-war consensus, which saw living standards rise in the UK, the birth of the National Health Service, and the creation of the welfare state. All that is being rolled back. Living standards are falling, the NHS is being privatized, the safety net is being withdrawn and the billionaires have become the new aristocracy, lording it over the rest of the population. What’s left to be loyal to now that the old Queen is dead?