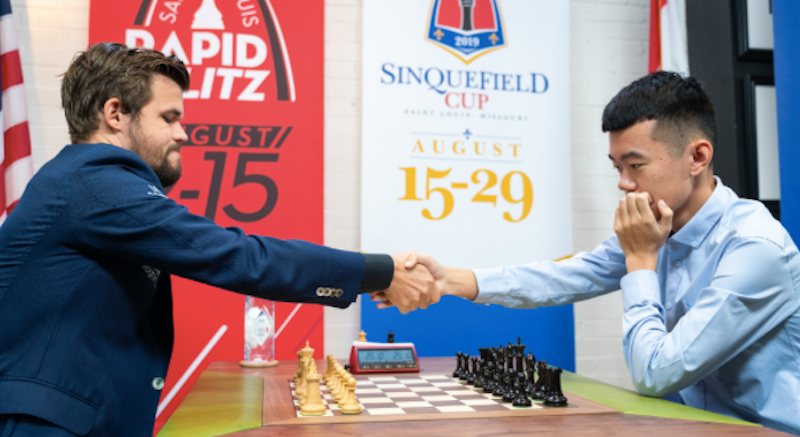 St. Louis recently hosted the Sinquefield Cup Tournament, a big deal in the chess world. On September 4th, one match was held between an American, Hans Niemann, and the current world champion, Magnus Carlsen. Carlsen’s a 31-year-old from Norway, Neimann’s 19, and won the World Chess Open last year in Philadelphia.

Carlsen became a grandmaster at 13, and has won the World Rapid Chess Championship three times. He has been ranked Number One in the World since 2011, and has achieved a peak rating of 2882. I can’t explain how that rating happens or what it means, but no one else had ever been given a rating that high. He first became World Chess Champion in 2013.

Neimann received his grandmaster title just last year. He began playing chess when he was eight, and attended a school known for chess called Columbia Grammar and Preparatory School in New York City. His heritage is mixed Hawaiian and Danish. He achieved a rating of just under 2000, when he was 10.

These two grandmasters met to play for the Sinquefield Cup, named for the founders of the St. Louis Chess club. This is an annual, invitation-only event, which had a top prize of $350,000 this year. It’s a part of the Grand Chess Tour, and Carlsen won at least a part of the title in 2013 and 2018.

After the match between Neimann and Carlsen, the latter left the tournament, which was highly unusual. Gary Kasparov said the move was “an act with no precedent in the last 50 years.” Carlsen sent out a tweet saying that he “always enjoyed playing in the @StLChessClub,” but he attached a video of Tottenham soccer coach Jose Mourinho making his famous quote, “If I speak, I am in big trouble.” Nothing is scandal-free today, not even chess. Elliot Kaufman wrote about it in The Wall Street Journal.

There’s speculation that Neimann knew of Carlsen’s game plan prior to their match. There are writings that suggest that a player’s socks can be wired in such a way as to gain information from a “Chess engine” and therefore make the best move. Nothing has been proven, but chess.com has banned Neimann from their site while an investigation continues.

Neimann’s been accused of cheating before, and did admit to unfair play online, but insists that he’s never cheated during live matches. He uses the streaming platform Twitch, and has played Carlsen online numerous times. He’s also played in the PRO Chess League for the Las Vegas Desert Rats and other teams. We await word from chess.com on the results of their investigation.