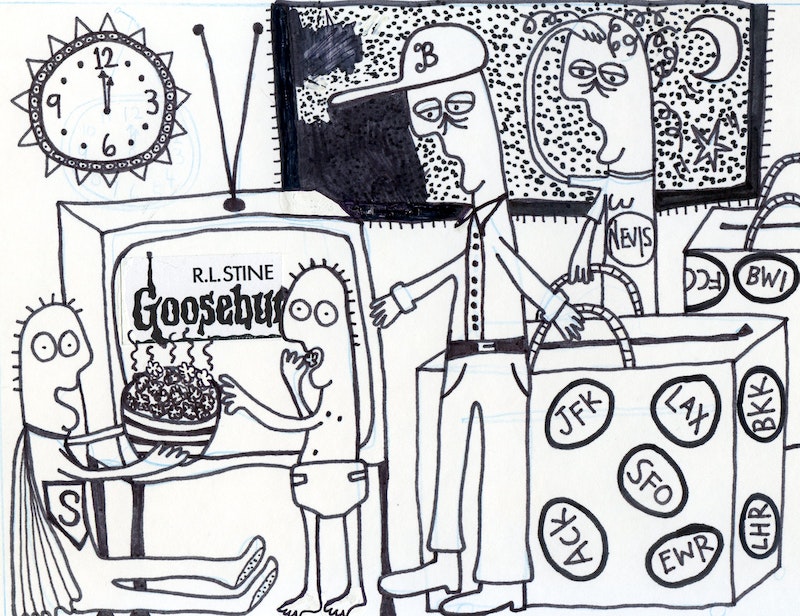 Every day, millions of people at airports around the country are pissed off, and brother, when that happens, I’m pissed off too! Last week, The Chicago Tribune’s Steve Chapman summed up the TSA nightmare with unassailable brevity: “This summer, air travel is for people who expect to go to hell and want to know what it will be like… The agency in charge of aviation security has become a major problem. That’s odd, because it was supposed to be a solution. Nearly 15 years after [TSA] was created, it’s a case study of how firm, well-intentioned government intervention can produce an exploding cigar.”

When you’re staying put, or traveling by the far more civilized Amtrak, it’s easy to take a look at the headlines about stranded passengers, shake your head at the government’s gross incompetence, and move on to the box scores of the previous nights’ baseball games. (Similarly, who really gives a rat’s ass about a hurricane in Miami; yet if one hits your neck of the woods, watch out!) But… when you’re set up to be in the middle of that “exploding cigar,” well, it becomes a me-myself-and-I problem. As it happens, my family will be visiting relatives in Bermuda in July, and I’ve been wrangling with our longtime travel agent Marv for the past two weeks about how to circumvent, or minimize, the difficulty.

We live in Baltimore—and direct flights to Bermuda from BWI no longer exist—and have an 8:40 a.m. departure time from Reagan National in D.C., which means an extremely early reveille call at the Smith household, say four a.m., considering showers, last-minute packing, an hour drive to National and then the torturous TSA drill. I don’t care for this scenario, and it’d be unpleasant but manageable if I were flying solo. But no, it falls upon me to marshal the troops—a couple of whom are very bad morning people—and as a reward get ribbed for being a Mr. Aggro Travel Mode pain in the neck.

It goes against the grain, but considering the current TSA foul-ups, I raided the piggy bank and told Marv to book us a couple of rooms the night before at a hotel within spitting distance of the airport. As you might expect, the quarters won’t be luxurious, but so what, it’s just to sleep and get to the cathedral on time. Now, it’s entirely possible that customers at Reagan are spared the mile-long lines because so many elected officials, and high-roller lobbyists, use the facility, and it just wouldn’t do if a Congressman from Massachusetts or Georgia were unduly inconvenienced. But who wants to roll the dice?

As everyone who was sentient as recently as the mid-1990s remembers, flying wasn’t always such a colossal headache. In the illustration above—by my wife Melissa for a 1990s NYPress MUGGER column—you can see that frittering time away before a flight wasn’t ideal, especially with young children, but arriving an hour ahead of time, just to be on the safe side, for even an international flight, was the norm for frequent travelers. No body scans, slipping off the shoes, opening computers, removing everything from your pockets and whatever else the bored TSA agents dream up that day. It’s not my intention to slag these men and women—a job’s a job—but let’s face it, when thrust into the maw of bureaucratic mayhem it calls for an extra summoning of deluxe schmooze, as odious as that can be, to at least grease your way through.

The other day, while gabbing with my wife, I caught a snippet of Matt Lauer and Al Roker droning on about this or that proposed “bullet train” that’ll allow affluent travelers to have breakfast in New York and then lunch in Los Angeles. Sure thing! Never mind that such trains were promised to consumers in the late 1980s—when Concorde was still afloat, mind you—and didn’t materialize, but with the airlines and airports in such a state of disrepair, who’s going to believe a single word about travel improvement?

And before anyone gets uppity, yes, I realize that 9/11 forever altered the way Americans get around, and I’m not advocating for a return to the more innocent flying the friendly skies—like in ’88, for example, when I ran to a plane leaving for Dublin from New York, the night after the Lockerbie crash, and the traffic was so jammed I almost didn’t make it aboard—but as Chapman suggests in his column, private contractors (deemed insufficient after the 9/11 attacks) make a lot more sense than government workers. The reason: if they screw up, a pink slip awaits.