Thanks to Miss Fisher’s Murder Mysteries. 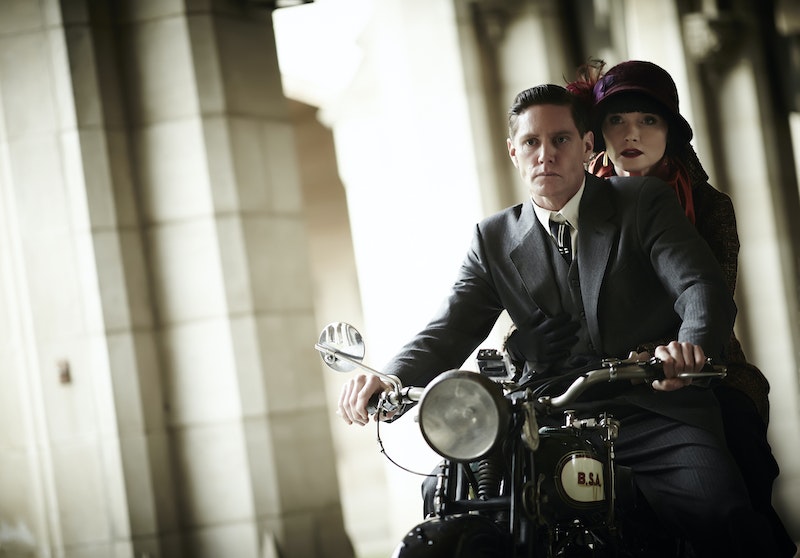 As is all the rage with us Millennials, I’ve been binging on Netflix of late—with particular regard to a show called Miss Fisher’s Murder Mysteries. Imported from Australia and based on the novels of Kerry Greenwood, Miss Fisher showcases the ongoing adventures of the titular Phryne Fisher (Essie Davis), well-to-do citizen of the world and Melbourne’s first lady detective. There’s a lot to love about the show, as Mallory Ortberg notes in her Toast article “Things I Have Yelled At My Television, Which Cannot Hear Me, While Watching ‘Miss Fisher’s Mysteries’ During My Convalescence,” not least of which is this outburst: “STOP MAKING ME CARE SO MUCH ABOUT HETEROSEXUALITY, JACK.”

The “Jack” to whom Ortberg refers is Detective Inspector Jack Robinson (Nathan Page), the dreamily no-nonsense policeman with whom Phryne develops a romance over the course of Miss Fisher’s three seasons. Jack and Phryne are the epitome of “will they-won’t they,” and while I’m usually deathly bored of that trope (especially when the needle so frequently falls on “will”), there’s something about this show’s approach to heterosexual romance that warms my cold, queer heart.

Around the time I got bored with being a boy, I also lost interest in monogamous, heteronormative romance. Go big or go home, I say. That’s why I’m seeing several other trans girls right now, all of whom are devilishly cute and precious to me in their own way, and none of whom have a hetero bone in their bodies. I still count myself as bisexual, but mainly because I happen to find Chris Evans maddeningly attractive; the vast majority of dudes are of no interest to me. When I watch television, I look for lesbians in the nooks and crannies of every show, and when none can be found I make ‘em up. “They’re totally scissoring offscreen,” I smirk smugly, devoid of any canon but secure in my ship nevertheless.

Yet Miss Fisher, which has a canonically queer recurring lady character—Dr. Elizabeth “Mac” Macmillan, played with dry charm by Tammy MacIntosh—somehow manages to suck me back into caring about hetero couples. It started with Hugh Collins (Hugo Johnstone-Burt) and Dottie Williams (Ashleigh Cummings), two baby-faced cinnamon rolls whose lives become intertwined with love and also mangled corpses. Dot’s a conservative Catholic who’s quietly enchanted with Phryne’s liberated attitudes, Hugh’s a Protestant boy trying to become a man on the mean streets of Melbourne—can they make it work? I mean, sure they can—they’re white cis-het main characters; but each character’s evolution is handled so well, it’s impossible not to root for them to be together. I didn’t even think about Dot finding the joys of sapphic sisterhood once during the first season! That’s 13 episodes! Isn’t that some kind of record?

But Hugh and Dot are simply the foundation on which Phryne and Jack’s relationship is built. Each has a shrewd, deductive mind, but operate in different ways; Jack stands by the rule of law, while Phryne frequently bends or breaks it to uncover the truth. Their skills complement one another, and though Jack may be stoic to a fault while Phryne’s flippant attitude towards sex holds him at arm’s distance, there’s no denying that they rely on one another. By the time the third season rolls around, Phryne and Jack may as well be married, though they’ve never been on a single date. There’s a “you and me against the world” quality to their friendship that’s only present in the strongest bonds, and seeing that play out on screen is so heartbreakingly romantic that I have to pause each episode at intervals to yell into a pillow.

Again, at no point did I cross my fingers and hope Phryne would end up with Mac, nor did I hope either of them would find another woman and try out polyamory (which, as far as I’m concerned, is the best possible outcome). It’s mind-boggling to me how Miss Fisher has managed to get me invested in traditional hetero relationships again, after I thought I’d never care about anything that wasn’t queer ever again.

I mean. It’s not like I’m going to date a boy or anything. But I guess I can see the appeal.