It has always had an element of creepiness. 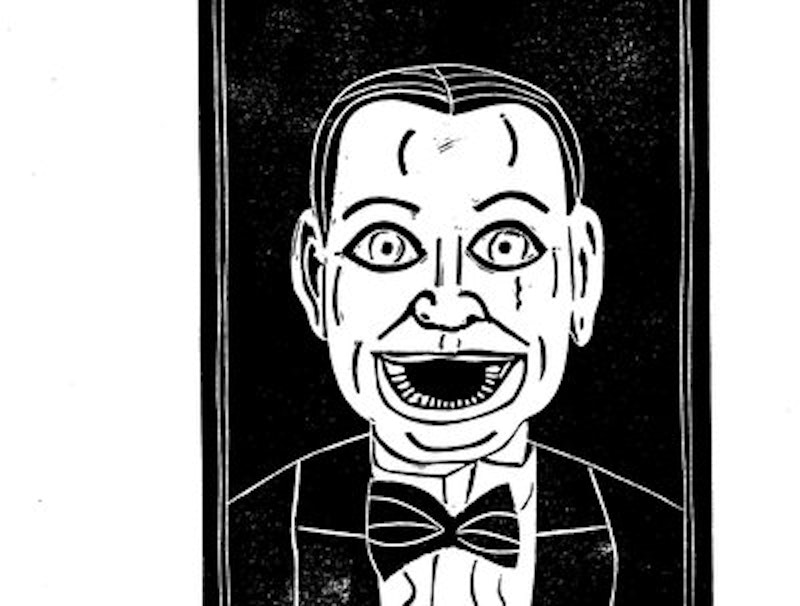 Recently I was teaching a printmaking class at a senior home when I encountered a woman named Phoebe who’d lost her right arm. We began talking and she shared her story. She’d been a ventriloquist of some renown in the early 1970s, appearing with her puppet Rudy on television programs like Captain Kangaroo and Hobo Kelly.  By 1980 her career slowed and the TV appearances ended. Her husband convinced her to give up ventriloquism and she found a job as a secretary.

“I put Rudy in a big wooden box and stored him in the back of the closet. At night I could hear him screaming, ‘Let me out, let me out.’ After a few weeks Rudy started threatening me, saying things like ‘you’ll be sorry’ or, ‘if you don’t let me out, I’m going to hurt you.’ I cried every night. I told him how sorry I was. But I never let him out.”

In 1981, Phoebe felt pain in her right arm, her puppet arm. She was diagnosed with advanced bone cancer. She had emergency surgery and her arm was removed at the shoulder. Her life was saved, but her performing career effectively ended. “I killed Rudy,” Phoebe said. “He tried to kill me.”

Ventriloquism dates back to classical Greece. Early ventriloquists were called “engastrimyths” (gaster for stomach, mythos for speech). Onlookers believed ventriloquists had demons in their stomach belching forth language from the host’s mouth.

In the book I Can See Your Lips Moving: The History and Art of Ventriloquism, author Valentine Vox writes that the roots of ventriloquism lay in necromancy. It was believed that ventriloquists channeled the spirit of the dead through holes in their body via nostrils, ears, mouth and anus. Biblical law specifically forbids necromancy as is written in Deuteronomy: “To seek truth from the dead is abhorred by God” and punishable by death (Leviticus).

Early ventriloquists sought to convince people their practice was religious in nature. At the Temple of Apollo in Delphi, the Pythia (high priestess) translated the strange utterances from her mouth as if they were prophecies from the gods. Centuries later, ventriloquists were consulted as a means of speaking with lost love ones.

In 16th century-France, a nun named Elizabeth Barton uttered worldly predictions via ventriloquism. She openly stated that King Henry VIII should not marry Anne Boleyn. She was hanged and the king was married. In 17th century-Europe, ventriloquism transformed from a medium of divination and prophecy to that of entertainment. Ventriloquists appeared at traveling fairs and local markets. In 1753, Englishman Sir John Parnell gained fame as a ventriloquist speaking through his hand. The first known use of a ventriloquist puppet came in 1757 when Austrian Baron de Mengen incorporated a small doll into his show.

The first ventriloquist in America was James Rannie, a Scotsman who arrived in Boston in 1801. He performed with a doll named Tommy that resembled a man but was the size of a small child. Rannie engaged in ventriloquist pranks like the time he asked a female fishmonger about the freshness of her fish. She told him the batch had been caught the previous day. One of the fish suddenly spoke, “It is false, I am a week older.” The woman was forced to throw away all her catch.

The 19th century was the golden age of ventriloquism. Early practitioners imitated animals, birds of the voices of young children. They became adept at throwing their voices and causing sounds to emanate from men’s snuffboxes and women’s handbags. Fred Russell is known as the father of modern ventriloquism. His puppet “Coster Joe” sat on his lap and engaged him in cheeky dialogue. He became a vaudeville hit in America and Canada.

By the 1930s, one of the biggest stars on radio was ventriloquist Edgar Bergen with his puppets Charlie McCarthy and Mortimer Snerd. Bergen popularized the comedic ventriloquist routine with rapid-fire wisecracks and one-liners. In her autobiography Knock Wood, Bergen’s daughter Candice wrote that she was raised as Charlie McCarthy’s kid sister. She recalled sitting on her father’s lap and being urged to talk with her wooden brother who sat across from her. “For me as a child,” Bergen wrote, “Charlie McCarthy had semi-human status. He wasn’t flesh and blood and he wasn’t a doll. He was a sacred calf. He brought home the bacon.”

Ventriloquism has always had an element of creepiness. The dummy has wild, rabid eyes, arched eyebrows and a crude, hinged mouth that clicks open like a mousetrap. When draped across a table or chair, away from the performer, the doll’s floppy limbs resemble that of a dead body. But the eyes remain open and the mouth is fixed with a terrifying smile as if the body is a poorly embalmed child corpse. Adding to the creepiness is the performance itself. The ventriloquist is often an older man with his hand moving up the backside of a young puppet boy who sits innocently on the man’s lap. The specter of pedophilia is unavoidable.

Many people are terrified of ventriloquist dummies. The condition is called automatonophobia. Hollywood has taken advantage of this fear, making movies like Devil Doll (1964) where a possessed dummy possesses his master and Magic (1978) where ventriloquist Anthony Hopkins commits murder under the guidance of his deranged puppet “Fats.”

Ventriloquism remains a subversive entertainment medium. Performers speak their darkest most obscene thoughts and blame it on the puppet. British ventriloquist Nina Conti says ventriloquism is a “sort of licensed Tourettes. I’m shocked by what the puppet can get away with, things I could never say.”