There is only one response to global capitalism run amok. 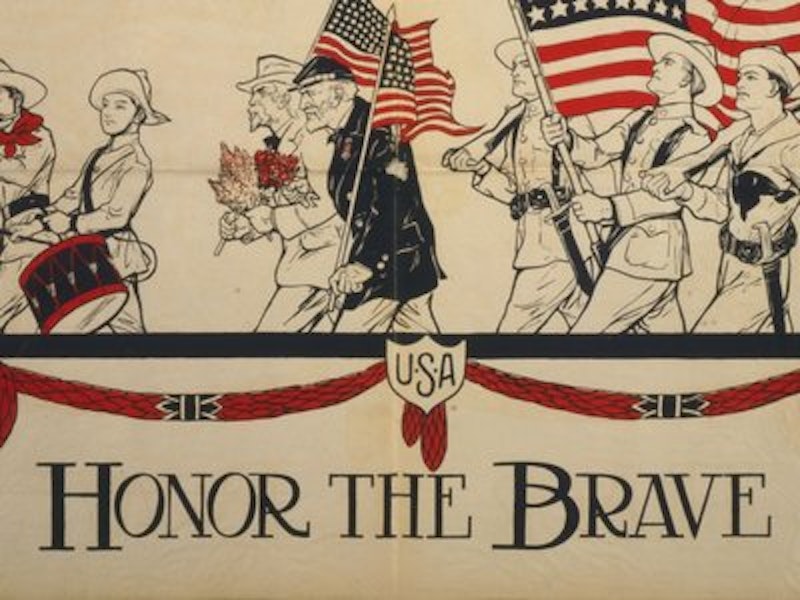 Memorial Day got its start as “Decoration Day” back in 1868, on the heels of the Civil War. It differs from Veteran’s Day (formerly “Armistice Day”) in that while Veteran’s Day commemorates all veterans, Memorial Day is dedicated to those who died in the course of their military service. Nowadays, like the Fourth of July or Labor Day, it’s mostly an excuse to get drunk and burn meat on outdoor grills. Americans don’t give a shit about history. Most Americans can’t remember what happened two weeks ago unless there’s a drug-addicted bipolar celebrity slut involved. We’re a nation of psychopaths, a global serial murderer blindly staggering from one murder scene to the next, wanton and remorseless, utterly unthinking of consequences.

I find it sinister and unsettling that there have been no commemorations whatsoever to mark the Sesquicentennial of the Civil War or the Centennial of World War I, particularly as the consequences of both of those conflicts are still very much around, like so much unexploded ordinance in a poppy field. “Who controls the present controls the past,” as Orwell famously said. “Who controls the past, controls the future.” At this time in the West, a showdown is rapidly approaching, a confrontation between largely Jewish globalist oligarchs (the “Neo-Cons”) and a vigorously resurgent volkisch movement openly espousing quintessentially Nazi ideals of national sovereignty and secure borders (the “Alt-Right”). China and Russia are readying themselves, well above it all, mono-cultural and strong.

The Jewish strategy of preaching and promulgating cultural miscegenation and integration while practicing the strictest regimen of cultural hygiene is breathtaking in its audacity. Nobody ever said Jews lack balls: they invented the word “chutzpah.” George Soros is precisely the Jew that Hitler was talking about in Mein Kampf and his many stirring speeches. Haim Saban and Sheldon Adelson live down to the stereotype so effectively that Joseph Goebbels could sit back and chill with Netflix and a few rails of meth, were he alive today.

How many refugees has Israel taken in? The very idea is laughable. Every time some Palestinian orphan launches a bottle rocket from Gaza, it’s a second Holocaust deserving of white phosphorous and cluster bombs. The Holocaust has been used to justify so much criminality that it begs to be thoroughly investigated. The reality is that the Holocaust narrative is entirely dependent on eyewitness accounts. Ask any homicide investigator about the reliability of that. There’s no forensic evidence whatsoever to support it. It’s the only historical narrative protected by law. In many otherwise enlightened countries, one can be sent to prison for suggesting that there’s anything false or erroneous about it. If you take the reports of the Geneva-based International Committee Of The Red Cross at face value, only about 300,000 Jews died in the camps, largely of typhus. When you take the whole “death camps” story off the table, what do the Nazis look like?

The only response to global capitalism run amok is National Socialism. Ask any Millennial what National Socialism is or was, and they’ll respond with some moronic answer like “hate,” “global domination,” or “killing Jews.” The reality is and was that National Socialism stood for the sovereignty of all nations, secure borders, and self-determination for all peoples. That’s why they worked so closely with the Zionist League.

You can try to erase history, you can falsify it, you can forget it if you like, but one thing is certain: it will turn around and bite you in the ass.