It’s time for Bert & Ernie to hit the retirement home. 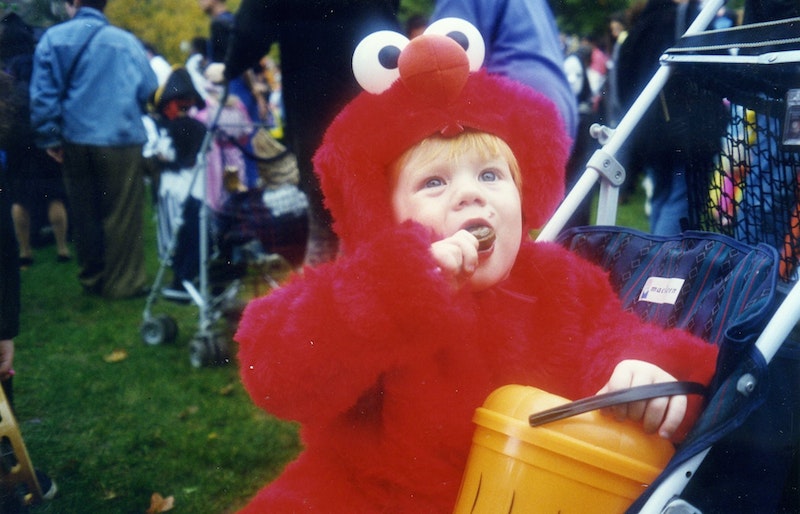 I’m going to take a giant step over to my friend Crispin Sartwell’s patch of rural Pennsylvania land and wholeheartedly agree with his recent article about how The Muppets and Sesame Street suck. Crispin and I have logged around the same number of years, and were parents of young children at around the same time in the 1990s. He writes: “Jim Henson and company sprayed the whole culture with a firehose of insipidity for decades on end. They advertised products… They talked out of their fluorescent faces with silly voices. They twitched and thrashed around, exploiting their astonishing intersectional identities as both puppets and marionettes.”

Not surprisingly, my sons Nicky (pictured above in an Elmo costume for Halloween in 1995; also a year later, just by happenstance we bought a Tickle Me Elmo doll in August for Booker’s Christmas, not realizing it would be come the “it” toy of the year) and Booker loved the show, as did my wife Melissa, but my patience ran thin after about two minutes, maybe getting a laugh from Oscar the Grouch or Miss Piggy. The celebrity guests were grating, the musical performers unctuous (Little Richard’s “Rubber Duckie” maybe the worst) and, what’s more, you had to pay attention and answer questions from the kids.

Some were benign, but others trod on liberal dogma that I found to be, as Crispin noted, propaganda, and it wasn’t as if I could explain that the entire concept of Sesame Street, and most of PBS for that matter, teetered on a parallel view of history. Okay, that’s strong, but you get the drift. I mean, Whoopi Goldberg was already fouling adult culture; so seeing her at 7:30 a.m. was a slap in the face. It would’ve been cool if Matt Drudge was a guest, just for all-important diversity, but no, it was Michael Jackson, Tom Cruise, Alec Baldwin, and the like.

As opposed to Crispin, I didn’t mind the ubiquitous Barney (no idea if the Other Purple One is still popular) videotapes that the boys watched over and over as toddlers. The show was a narcotic, and easy to tune out the “I love you, you love me” baloney and read that morning’s New York Times and Wall Street Journal relatively uninterrupted. Perhaps that sounds selfish, but the majority of parents with something resembling a brain would agree: between the wake-up calls in the middle of the night, walking one of the Little Princes in a stroller around the apartment, fixing breakfast, and then cleaning up the tossed French toast or Fruit Loops, a short break was nice. On the other hand, I kind of dug the Teletubbies, the Brit Barney that never really took off in America; it was a trippy show, one that reminded me of light shows at concerts in the late-1960s.

I couldn’t even watch Mr. Rogers, though the kids loved it, and palmed that atrocity off to my wife Melissa. I haven’t a touch of diabetes, but feared the worst might happen if I heard the cardigan-clad Most Trusted Man in America warble his signature song. On the other hand, when the boys were a bit older, I (sort of) enjoyed Rugrats, Doug—really, when a dog is named Porkchop, that’s the seal of approval, plus Doug’s beatnik sister—Arthur, Ren & Stimpy, SpongeBob, Hey Arnold!, and Goosebumps, which was kind of a kid’s Twilight Zone. Not long after, Nicky was mesmerized by The Simpsons, so we were in business and out of the Sesame Street danger zone.

I never had much luck attempting to foist my own childhood favorites on the kids: Heckle and Jeckle, Donald Duck, The Jetsons, The Little Rascals (nixed 30 seconds in because Alfalfa, Miss Crabtree, Darla, Butch, and Spanky were in black and white), Bugs Bunny, Dobie Gillis, I Love Lucy, The Honeymooners, or even Top Cat. I did succeed, at least with Booker, on watching vintage episodes of Mister Ed, but that was kind of a gimme because if you can’t be amazed by a horse that talks and wears glasses, your soul is in question. Of course, they loved the modern Disney films, but turned up their noses at Donald Duck fighting Nazis in World War II, and try as I might, I couldn’t engage them in a rudimentary history lesson, which was a lot more valuable than Bert and Ernie rapping about nutrition and de facto Democratic Party talking points.

All the above is really a bit petty, if fun, to recount. Far worse, for example, was when one of the kids was in middle school and the teacher ditched the class assignment of A Tale of Two Cities because she didn’t have the inclination, or smarts, to read it herself. They watched Oprah instead.