From the Bowne House to the Kingsland Homestead. 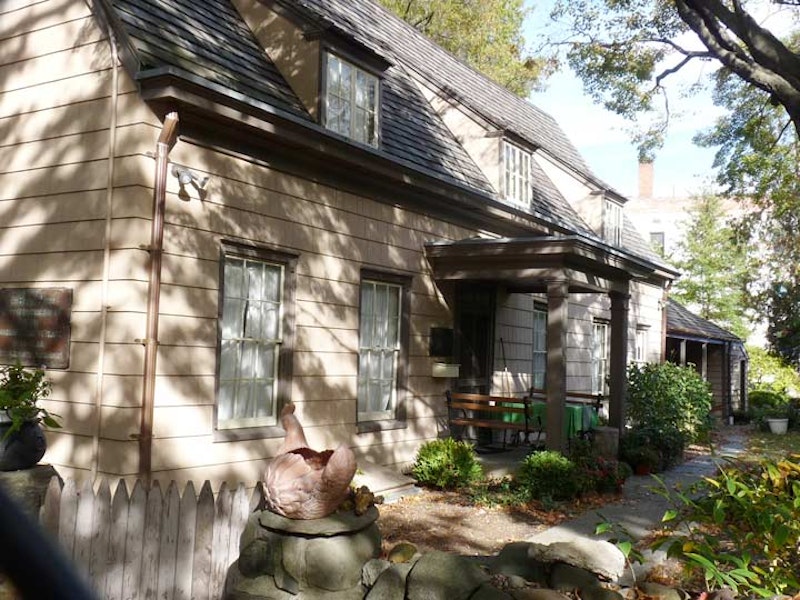 The land just east of the Flushing River in the center part of Queens has been occupied for many centuries by the Matinecock Indians, later by Dutch and English settlers, and currently by immigrants from Southeast Asia and their families. Rivers are the original superhighways, and the East River inlet known as the Flushing River provided a convenient method for importing and shipping out goods for trade. The Dutch founded a small town on its eastern shore earlier than New Netherland was founded further west. Led by New Netherland Governor William Kieft, the Dutch took the region by force from the Native Americans and warred with them until the English arrived in 1645, on invitation from Kieft, who granted the English a vast 16,000-acre tract that included what is now Flushing. The name is an English transliteration of the Dutch town of Vlissingen meaning “salt meadow valley.” The Dutch, under the firm hand of Director General Peter Stuyvesant, were in charge, however, until the British arrived with an overwhelming naval force commanded by Colonel Richard Nicolls and assumed control in 1664.

Seen above is Flushing’s oldest building. English settler and Quaker John Bowne built this house in Flushing Village in 1661, on what would become Bowne Street at 37th Avenue. His house was the primary site for Quaker services. Sentenced to pay a hefty fine by the Director General, who only tolerated the Dutch reformed Church in New Netherland, Bowne refused and was jailed; he was subsequently exiled to Holland by Stuyvesant.

While he was there, Stuyvesant's bosses at the Dutch West India Company reversed Stuyvesant's non-tolerant policy, claiming that the colony needed many immigrants to ensure economic expansion, no matter what faith they were.

The Bowne House today has added a couple of ells since 1661, but it looks much he same as it always has in photographs and postcards. It can be visted during two hours each Wednesday and is open for the Flushing Historic Houses tour, usually the second Sunday in December. 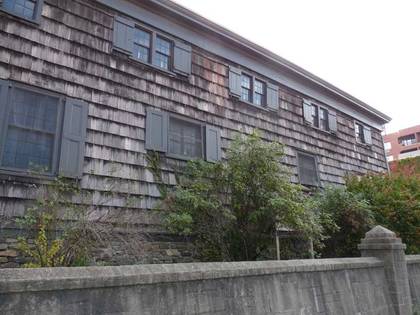 This building, younger than the Bowne House by 31 years, opened because of Stuyvesant’s religious intolerance. In 1657, Quakers living in Flushing sent a letter to Stuyvesant in that year that has come to be known as the Flushing Remonstrance, that reiterated the settlers' desire for religious freedom. The document was signed by Flushing's town clerk and sheriff, who were not Quakers but Dutch Reformed Church members; nevertheless, they too spent time in prison.

37 years after the Flushing Remonstrance was presented to Stuyvesant, this meetinghouse was raised in 1694. At the rear you’ll find a quiet churchyard with graves hundreds of years old that makes quite a rural riposte to bustling Northern Boulevard. More old stones can be found at St. George Church at Main Street and 37th Avenue; that church, where Francis Lewis of Declaration-signing and Queens Boulevard fame was a vestryman, dates to 1854. 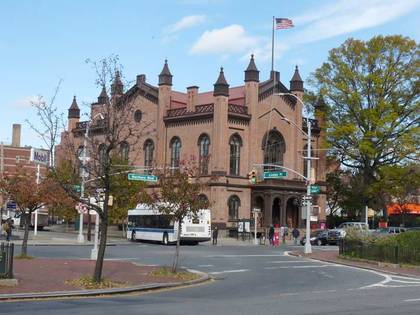 Flushing Town Hall, constructed in 1862, is a reminder of the days before Flushing became a part of Queens and then a part of New York City. Frederick Douglass and P.T. Barnum appeared here during their heyday. After NYC consolidation in 1898, Flushing Town Hall became a municipal courthouse, but it suffered from a gradual deterioration over the decades; there were fitful attempts to turn it into an anthropological museum in the 1970s. When I first moved to Flushing in 1993 it was a rundown heap protected by chicken wire from ever-present vandals.

The story does have a happy ending. Town Hall was magnificently restored in 1995 by the architects Platt Byard Dovell and it is currently the seat of the Flushing Council on Culture and the Arts. The magnificent building is now a vibrant locale for local arts programs and jazz concerts. 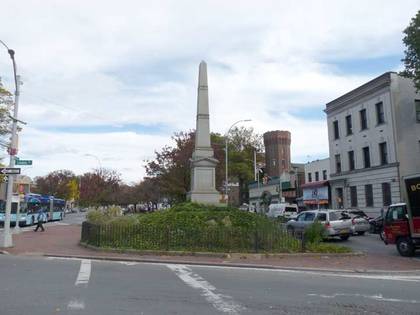 Until 1920 or so, Northern Boulevard was called Broadway in Flushing. Going back to the 1800s, it has had a wide, tree-shaded center mall that has accreted a number of memorials over the decades and centuries. Its Civil War obelisk was erected in 1865, facing Town Hall. Not much is known about this monument other than its original date of construction. 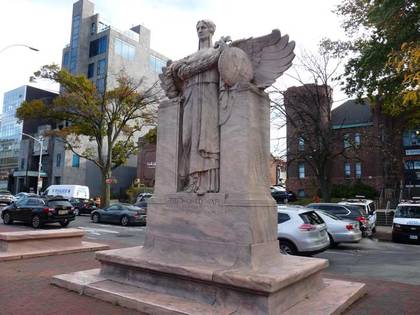 Further east is Hermon MacNeil‘s World War I memorial bearing the names of Flushing’s dead in that conflict. MacNeil, a College Point resident, also designed the “Standing Liberty” quarter (the predecessor to today’s Washington Quarter), the Marquette Memorial in Chicago, and 4 busts in the Hall of Fame of for Great Americans, among many other works. Both memorials list the names of every Flushingite killed in both conflicts. 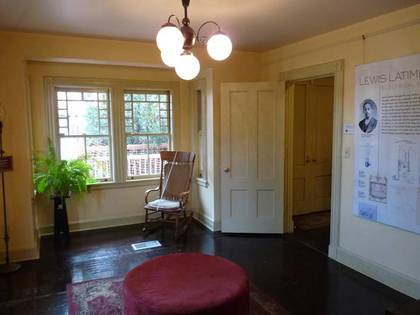 At Leavitt and 137th Streets is the modest porched house that once was home to Lewis Latimer (1848-1928), inventor and engineer. Latimer was born in Massachusetts to parents formerly held in slavery in Virginia. He enlisted in the U.S. Navy in 1864 and upon his release answered an ad for an office assistant from the patent law firm of Crosby and Gould, ascended to head draftsman, and discovered he had a knack for invention.

While still at Crosby and Gould, Latimer assisted Alexander Graham Bell, providing the drawings for Bell’s patent application for the telephone; after leaving the law firm, latimer joined the U.S. Electric Lighting Co., a chief rival of Thomas Edison. There he would produce a long-lasting carbon filament that was a major improvement on Edison’s 1878 electric lightbulb; Edison’s filaments, which used bamboo filaments, burned out quickly, making early bulbs impractical. Latimer also developed the first threaded lightbulb socket and assisted in the installation of New York City's first electric streetlamps, among many other inventions.

In 1995, the house was carefully moved from its original location on Holly Avenue. It underwent a renovation that brought it closer to its appearance when Latimer and his family resided there, and has been opened as a museum. The building is currently undergoing a second exterior renovation. 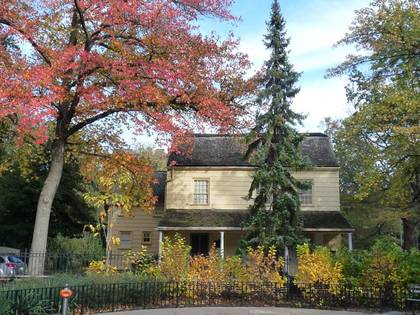 Amazingly, though Flushing can claim two buildings from the 17th century (Manhattan has none), 18th century buildings are few and far between.

The Kingsland Homestead, 37th Avenue at Bowne Park, has been located in three sites since its construction in about 1790. In the 1920s it was moved to make way for the Flushing subway; before 1968 it was located at the southeast corner of Roosevelt Avenue and 155th Street, where it was beginning to become rundown. The Queens Historical Society had it moved to its present location in Bowne Park, and the Society is housed in the homestead now.

Quaker Joseph Doughty constructed this building around 1785-1790. It is named for his son-in-law, sea captain Joseph King, who bought it in 1802. It was later occupied by the Murray family, who gave their name to Murray Hill and Murray Street in east Flushing, well into the 20th century. The interior of the homestead has been preserved pretty much as it was in the 19th century, and a public exhibit by the Queens Historical Society occupies much of the first floor, which includes a representation of the Flushing Remonstrance.

A recent exterior addition is a milestone that was formerly located on Northern Boulevard and 87th Street, which was 5 miles from the ferry to Manhattan in Hunter’s Point. It is the only surviving mile marker of a toll road built by John Jackson in the early 1800s connecting the waterfront with Flushing, known as Jackson Avenue. It has become Northern Boulevard, but Jackson’s name was appended to the neighborhood that was constructed around its route, Jackson Heights.