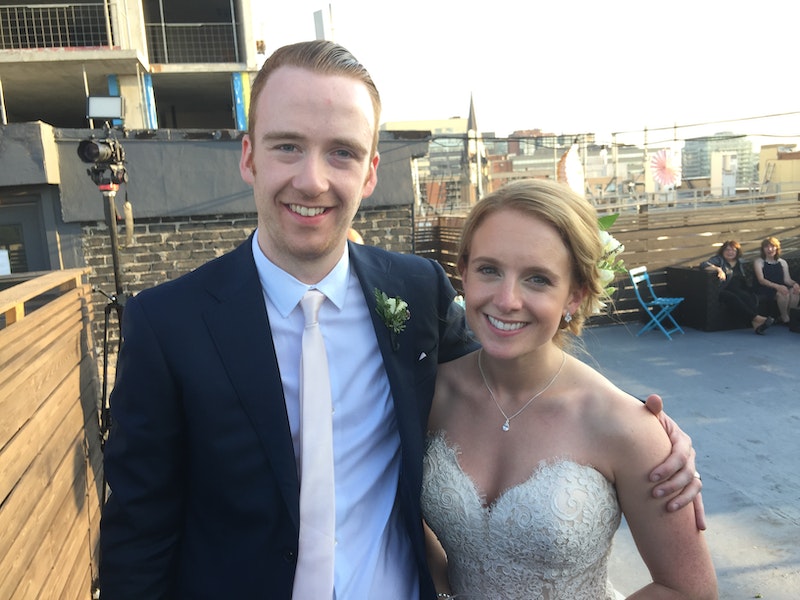 Absolutely, sweet Marie, I had a devil of a time getting out of Canada last Sunday afternoon. And I’m a fan, especially of Toronto—Montreal’s a pretty city, but its Paris complex bugs me—the most cosmopolitan city in North America besides New York. My wife, sons, and I were knackered after three days of celebrating the joyous, and boisterous, wedding of my nephew Rhys and his fetching bride Rachel (pictured above)—a subject I’ll mosey over to in short order—and weren’t in any mood for the shenanigans and stifling bureaucracy we encountered at the city’s Pearson International Airport. Never mind the difficulty of negotiating online boarding passes instead of the old-fashioned—and quicker!—practice of waiting on line at your carrier, in our case, Canadian Air. That’s the way of the world now, as my son Booker reminds me daily on a variety of subjects, and as Johnny Cash once sang, “I don’t like it, but I guess things happen that way.”

Fortunately, we arrived a hard two hours before lift-off, going straight from a wedding post-mortem brunch at the Gladstone Hotel, since we needed every minute. Swear to God, Pearson has more checkpoints and obstacles than almost any airport I’ve experienced, including those in Dubai, India, and Dallas. I was needlessly upbraided by a busybody employee while on one of five lines for taking a call on my cell from Booker, who was already inside the inner sanctum since his flight was to New York rather than Baltimore.

Two of the security officials looked at us askance, asking a bunch of gratuitous questions, with nary a smile, and another asked if my name was, in fact, Smith. Since you know, that’s a common surname. No shit! I’ve only heard that my entire life. Then—and this was my miscue—I almost really queered our chances at leaving Toronto when, upon being electronically frisked by a very friendly Muslim woman, in the traditional garb of that religion, I laughed when she said I was a-okay, made a joke, gratuitous schmooze, and was just about to pat her shoulder in a “We Are the World” sort of way. Instantaneously, I pulled my hand back, realizing that offense might be taken and three or four Imams might suddenly appear to scoot me away to a funny farm.

I’m afraid that was a quite lengthy digression, but so sorry, it just got my goat; you’d think if we were such a bother they’d want to get rid of us on the double. Anyway, Rhys, the younger son of my brother Gary and sister-in-law Teresa, is, with only a glimmer of bias, one of the best guys in the world: brainy, cheerful, funny, competitive, quick with a sarcastic jab, and the sort of fellow you’d want around should a crisis present himself. I haven’t known Rachel long—we met at Rhys’ brother Quinn’s London wedding last March—but she’s delightful, and anyone who remains sentient can see, by their body language, that this is a couple destined for a long life together. (I’d have said to Rhys, at the wedding reception, “And may your first child be…” but wisely decided to keep my beak out of others’ business, and refrain from one more Godfather cliché that’s so common among certain people my age.

Like many of my relatives, we stayed at Toronto’s spiffy Four Seasons—a chain I really like, except for the Manhattan branch, which is extravagantly expensive, with nose-up-in-the-air aspiring actors/models who put me off—and, aside from a scene on Saturday morning when a mob of people congested the hotel and immediate surroundings, waiting to put bids in on a condo project, it was flawless. I was particularly appreciative of the lickety-split maid service, and lovely concierge, who confirmed Rhys’ recommendation of the upscale Chinese restaurant Luckee on Thursday night, and gabbed with my wife Melissa about various city attractions.

The night before the wedding about 25 or so of us, mostly from the Smith side, gathered for a long and, at times, rambunctious cocktail hour and meal at Collette Grand Café on Wellington St. W. There was just one snafu: my 24-year-old son Nicky ordered (don’t ask) a Jack Daniels and Coke and was carded, obviously much to his chagrin, and though I attempted to salve his burn, saying, “A youthful face, Nickelodeon, celebrate the good news!” he had none of it, since his tongue was hanging out waiting for a drink. As it happened, his cousin Caleb intervened, ordered the same concoction, and then two of the drinks appeared simultaneously, the waiter apparently realizing Nicky’s lack of identification wasn’t a Rocket Man crisis after all.

The wedding itself, on Saturday, held at a quirky venue called the Burroughs Building on Queen St. W., was a combo of the traditional and wacky. The fellow who pronounced Rhys and Rachel man and wife exemplified the latter. A jovial sort, he had the cadences of a Baptist preacher at one moment, and then a stand-up comedian the next. It was odd, but a good kind of odd; I was cracking up at several points in the 25-minute ceremony.

Also unusual, at least in this century, was the abundance of formal dress. When I queried Gary months ago about the attire, he said, “Well, Rhys has requested I wear a jacket and tie, and, as it’s his wedding and not mine, I intend to comply.” As did I, rescuing a glen plaid suit I hadn’t worn since sitting shiva for a friend’s father five or so years ago. Quinn, Rhys’ best man, was rather out of sorts about this wrinkle—he wore an of-the-moment track suit at his own wedding—and griped about it the night before, particularly annoyed that he’d have to accessorize with a pocket square. However, he kept the ensemble intact for the duration—unlike Booker who shed his tie once the “I Do’s” were completed—surely the sign of a good sport. Quinn, like his dad and yours truly, sometimes has a grumpy face on, but it’s not his true nature. (I blabbed on and on with Quinn’s wife Madeleine over the weekend, and at one point, when we were both carping about a bitchy photographer, she said, “Well, you know that Quinn and I are both quite misanthropic!” Could be, but Miss Madeleine is a heart-of-gold gal in my book. Even though I’m sure she can’t stand early-1970s Neil Young.)

And, when the toasts to the bride and groom came, it was Quinn who stole the show—although I’ll note that Rachel’s dad, Steve, opened up with an understated but well-considered and loving nod to his daughter and new son-in-law—seamlessly incorporating Twin Peaks mythology, Drake, and only slightly embarrassing recollections of growing up together with Rhys in London. All delivered in a pro’s staccato patter. Risking a dressing-down from my brothers Randy and Gary, I’d venture that my late brother Jeff was the family’s tippity-top toastmaster, but now believe that torch has been passed to young Quinn.

The packed weekend—including tours of the Islington neighborhood (Nicky was at home at Rotate This, a vinyl store where he found a rare, pre-Song Cycle Van Dyke Parks single), which reminded me of the Haight and the late-1980s East Village, the posh Bloor St., and a sprawling Chinatown—meant I couldn’t watch Red Sox games at a crucial part in the season. Sacrifices! Anyway, I periodically looked at my phone to check on scores, which didn’t go unnoticed. My niece Zoe, also a Sox fan, and I took time to assess the team’s chances in October at the rooftop reception after the wedding, and Boston certainly looked in better shape at that juncture than today.

Anyway, though I didn’t take the opportunity to publicly plump the delirious couple of Saturday, surrounded by friends and family, I’ll add my Canadian nickel here, with my wish that Rhys and Rachel embark on a long, healthy, adventurous, and prosperous life together.