The Mighty Quinn makes out. 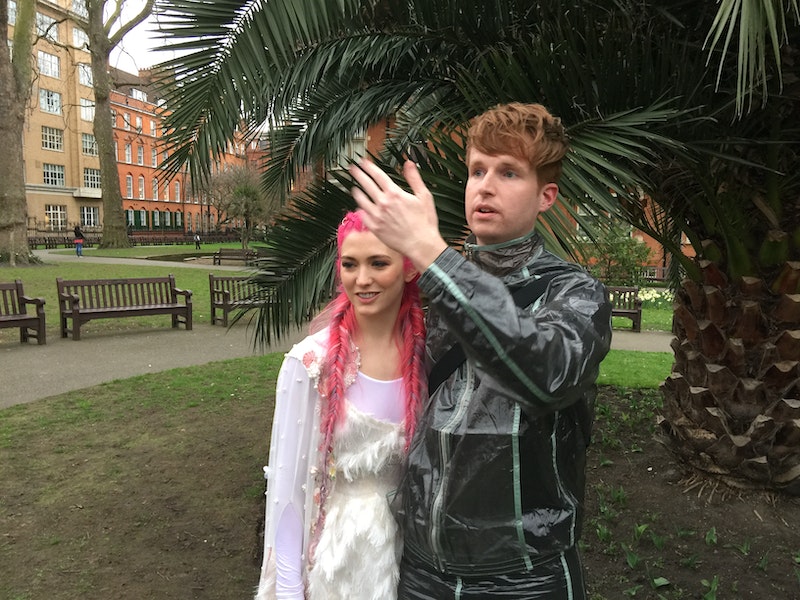 It’s really a minor detail, but I’m still cracking up. Last Friday night, milling about East London’s St. John restaurant, one of perhaps 80 guests at my nephew Quinn’s wedding reception—the bride a radiant Madeleine Sophie Davenport (both pictured above)—I made the mistake of accepting from a roving waiter a quail morsel, with no napkin. Quail’s not meant to be eaten standing up, and after a few nibbles I was left with a greasy hand and nowhere to bin the bones. A quandary, as I didn’t want to soil my pants or light gray sweater, but after a moment of hesitation I took the eatery’s history into account—it was once a rave venue—and chucked the hors d’oeuvre down a flight of concrete stairs near the john. My son Nicky looked at me in horror, but in the formerly Sleepy London Town, this was a minuscule rage against age—as were the checkerboard Vans sneakers I wore—seeing how the Pepsi Generation’s glass bottle is nearly drained, giving way, as this event powerfully demonstrated, to a much younger group, whom I won’t affix a label since that would just cause trouble. (Four of the Smith male cousins—Rhys, Booker, Nicky, and Quinn—are pictured below.)

Not much earlier in the afternoon/evening, my brother Gary, father of the groom, directed a few words to Quinn and Madeleine, after they’d officially tied the knot at the picturesque Mayfair Library on South Audley St., quoting four lines of a Top Ten song from when he and my brothers were so fab we could’ve been name-checked in “Desolation Row.”

“Wild thing, I think you move me/But I wanna know for sure/Come on and hold me tight/You move me.” And if you can’t instantly name the group responsible for this sunburst of wisdom, leave my column now! After the mercifully short but lovely ceremony, Quinn’s brother Rhys—who’ll marry in September, in Toronto, his longtime girlfriend (or, as they say in California and London, “partner”) Rachel—corralled the various factions of guests for a photographer, a pleasant chap who understood the chilly air was an impediment to all in their finery, and completed the ritual in an efficient manner.

It doesn’t take much to surprise me these days, so when Quinn was front and center at the Library, dressed in a silver track suit, next to Madeleine—whose line of work and passion is fashion—resplendent in an unconventional white dress with an array of accessories, it all made sense. I hadn’t attended a wedding for some years, but Quinn and Madeleine’s was one for the scrapbooks (if you’ll pardon another 20th century allusion): scant, if any, mention of religion, but long on love and happiness, all witnessed by an eclectic group of family members on both sides, and the couple’s uniformly charming selection of friends. My sister-in-law Teresa (whose award-winning photography I’ve had the pleasure to post on Splice Today), Quinn’s mom, was glowing throughout the evening, and, as usual, we chatted away, as has been the case since I first met her in 1971 when she and Gary were students at the University of New Hampshire. That’s a lot of miles we’ve traveled through the years, and yet our gabfests are still fresh.

Despite the event’s effervescence, I must admit I wasn’t in tip-top shape, with a stomach that wasn’t in sync for the occasion. My wife Melissa and our sons Nicky and Booker had traveled to Dublin the previous Monday (departing from the odious Dulles in D.C.), and that city, as always, was a delight, but with the 61 rings around my trunk, a disruption in a rather strict diet took its toll. As did, at least initially, jet-lag, but that’s a picayune matter that you just deal with. For example, on Tuesday night, the boys and I took our dinner at O’Connells, not far from the still-majestic Shelbourne Hotel, and my meal of small prawns in a rich sauce, and then a shank of lamb with cabbage and tomatoes was delicious, and far more authentic than the Michelin one-star we went to the following night, but tied my gut in expert Boy Scout knots. That said, although Grafton St.—where years ago I spent many an afternoon and evening at local pubs, relishing the fresh Guinness and Harp—is now a generic pedestrian-only shopping mall, it didn’t dampen my enthusiasm for the people of Dublin or the Writer’s Museum, a small gem that nonetheless kept us transfixed for an hour or so. Last week, Nicky jotted down his impressions of Dublin for Splice.

Back in ’86, I was in and around Dublin for a month—side trips to Cork, barb-wired, don’t-volunteer-your-religion Belfast, and London—and spent a few nights drinking with a fellow named Brian and his cohorts, who’d befriended me at a pub, and in a jolly way poked fun at my Menthol Merits, joking that “real men” smoke the local Majors. As it happened, several weeks later, on the eve of my return to Baltimore, I’d met up with a newspaper buddy, Jim Larkin—in those glorious days of profitable and journalistically vital free weekly newspapers, he and Mike Lacey owned Phoenix’s New Times and Denver’s Westword, but it wouldn’t be long before their chain expanded, before the print world went kablooey around 2006—at the Shelbourne, and we went outside for less precious booze, where, coincidentally, Brian was tending bar, and not batting an eye, said, “Hey, Russ, same again?”

Dublin’s a booming mess of construction right now, but nothing compared to London, which we learned on the ride from Gatwick to the Mayfair Hotel on Thursday afternoon. While my wife went foraging on her own, the boys and I took our few short hours available to first stop at Fopp, probably the best record/video/book shop that I’ve seen in this era of independent retail decimation, and I swept through the store, loading up on British DVDs. Off then to Honest Jon’s, a record store open since 1974, in the hurly-burly of Portobello Road, and while Nicky was having a grand time speaking with a manager, I took my Gatemouth Brown and Roscoe Shelton CDs outside, had a smoke, and tried, in vain, to warm up against a most unpleasant drop in temperature. Had it been warmer, and time was not pressing, I’d have enjoyed showing the boys around the famous bazaar, as I recall spending hours there in ’84, ’87, and again in 1990 with Melissa. But not this time, and good thing, since it took forever to snag a cab back to Mayfair. And once more: I felt like dog meat, the aftermath of eating too much smoked salmon with fennel and pickled cucumber, Cock ‘n’ Bull croquettes, strips of perfect sirloin and slices of a chicken stood up at the table of the fine restaurant Hixter Bankside, not far from the Tate.

It’s March 21st now, and I’ve yet to get fully back in gear, but wouldn’t have missed Quinn and Madeleine’s nuptials for the world. I might not remember every detail of last night’s viewing of episode three of Death in Paradise’s sixth season, but will never forget the call I received on October 7, 1987—I was in London—from Gary informing me of his eldest son’s birth. On the horn later with my brother Jeff, always lickety-split with the nicknames, he opened with, “So, the real Mighty Quinn has arrived!” As was usually the case—save his irksome devotion to the New York Yankees—Jeff was right on the mark, you old beans. 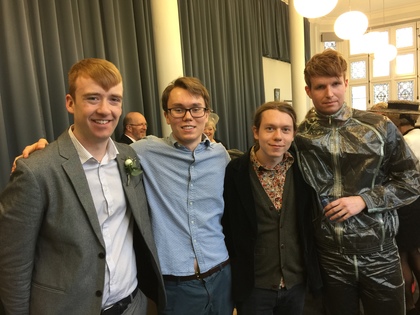