Just two blocks east is a pond that’s a trip into the past. 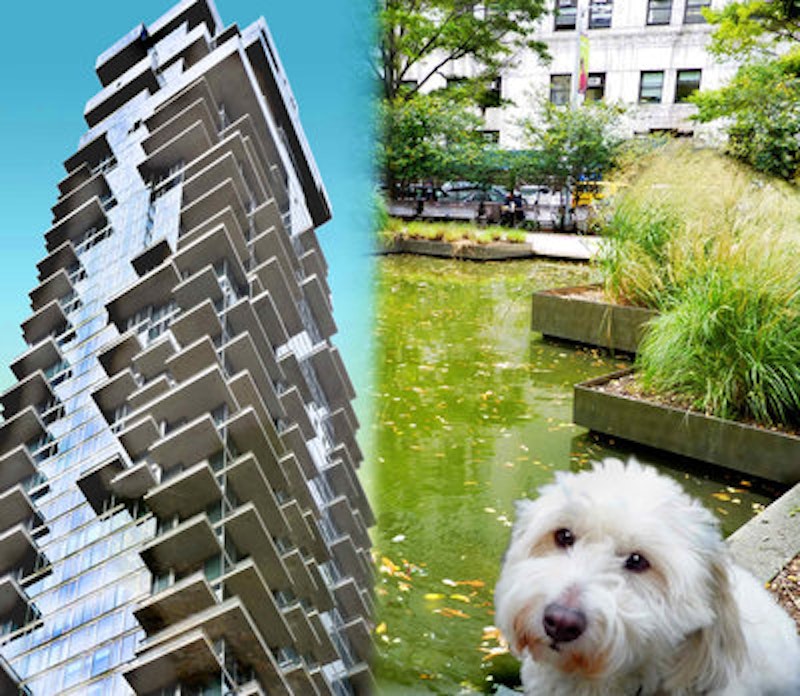 New York City’s jaded residents walk with their eyes fixed on the sidewalks, but they’ll pause to glance up at 56 Leonard St. in Tribeca. You can’t miss the Jenga Tower, a luxury residential condominium that’s the modern architectural vision of Swiss architects Herzog and de Meuron. This svelte, interlocking cantilevered skyscraper eerily looms alone in the skyline. Tiny dark silhouettes of people hovering high above stand on layered futuristic balconies pointing towards the Hudson horizon. Anish Kapoor’s two-story, 40-ton mirrored steel sculpture will soon be assembled at its base.

But what comes as a curious surprise, just two blocks east is a place that’s a trip into the past. There’s a small pond. In a location familiar to my colleague William Bryk, Collect Pond Park sits within the halls of justice, right in the heart of the Civic Center opposite the Manhattan Criminal Courthouse on Centre St. There was once a big pond in a valley fed by an underground spring in the same location. That pond has a history.

Native Americans inhabited this area in the 1600s, hunting wild animals in forests of hemlock. The 60-foot deep pond provided fresh, clean drinking water and food. When the English took over New Amsterdam in 1664 they named it “Collect Pond.” For most of the 18th century, it served as a season-round waterhole providing everyone a place for fishing, washing, socializing, and ice-skating.

In the early 1800s as the population of lower Manhattan expanded, conditions rapidly deteriorated with unrestricted commercial expansion. Tanneries and breweries nested along its shores. Not surprisingly, the pond became an open-air cesspool filled with horse carcasses, dead pets and other detritus. The once cherished water supply now fueled cholera outbreaks. It became one of America’s first ecological disasters.

Canal St. was built to drain the pond into the Hudson River in 1807. The City leveled nearby Bayard Hill in 1811, filling the remaining pond with soil and rock. The wealthy businessman of the day built middle-class homes on top of a marsh landfill and called it: “ Paradise Square.” Well, it wasn’t.

The project was a major engineering failure due to the area’s high water table and the landfill and houses sunk. Methane gases from buried garbage and vegetation oozed from the earth and mosquitoes infested the stagnant area. The wealthy who moved in, quickly moved out. A sudden influx of poor immigrants flooded into the neighborhood known as “Five Points,” America’s first slum.

The dark, damp alleyways housed dens of vice and drink. The Hot Corn Girls walked the gutters selling ears of corn in taverns to slaughterhouse butchers. Often knee-deep in mud and waste, it was a gang and crime-ridden place where one might get knifed or murdered. Herbert Asbury’s 1927’s The Gangs of New York mentions The Old Brewery, a filthy tenement by Murders Alley where human bones were found in the cellar. The building was demolished in 1853. In an odd, shocking lack of empathy the affluent often visited Five Points to gawk at the poor and coined the phrase “slumming.” Five Points was the first instance of large scale American racial and multicultural integration with a population of Irish, Jewish, German, African American and Italian. And it remained relatively calm during the Draft Riots of 1863.

Jacob Riis, a social reformer and photojournalist, published How the Other Half Lives in 1890 detailing the heinous conditions of slum life. Activists heard the cries of the impoverished and rallied together supporting change. The City of New York condemned and demolished the slum properties. Columbus Park in Chinatown now sits in its place.

For many years Collect Pond’s existence was all but forgotten. It remained a gritty, stark concrete square next to a parking lot. Then in 2008, the City announced it was bringing back the pond. After two centuries, under the Bloomberg administration, the project moved forward. Collect Pond Park would finally return to its original proper property line in 2014. The renovated pond setting now includes various types of native plants.

The pond is a cookie-cutter shape, enhanced by pseudo Wizard of Oz style paving paths surrounding the shallow pool. There’s a walkway bridge through the pool middle with tall grasses around the perimeter and a push-button spray fountain that kids, thirsty dogs and dirty birds love. Critics argue the park’s “mall-like” styling is uninspired, citing a false natural design and stuck it with the label: “landscape urbanism,” like the High Line.

On any given day the local activity includes: Tai Chi practitioners, handcuffed perpetrators escorted by correction officers and jurors on break. Once I saw a brave fellow taking a bath in the green pond while a disturbed, shirtless individual ran around in circles yelling, “Gandhi, Gandhi, that’s his name!” Admittedly, Collect Pond Park’s no Garden of Eden. The makeover can’t hide the despair reminiscent of the days of Jacob Riis: it’s a prime example of the homelessness crisis.

The park does provide early morning bird lovers a spot to listen to the house sparrow’s spirited “cheep, cheeps” while the sunlight’s rays cast interlaced shadows through the overhanging tree branches. So if you happen to find yourself in Collect Pond Park sometime, here’s something to think about: look up at the wrap-around penthouse on the top of the Jenga Tower, it just sold for $48 million!