Socrates and the Limits of Dialectic

We have entered an era when human irresponsibility endangers us all. 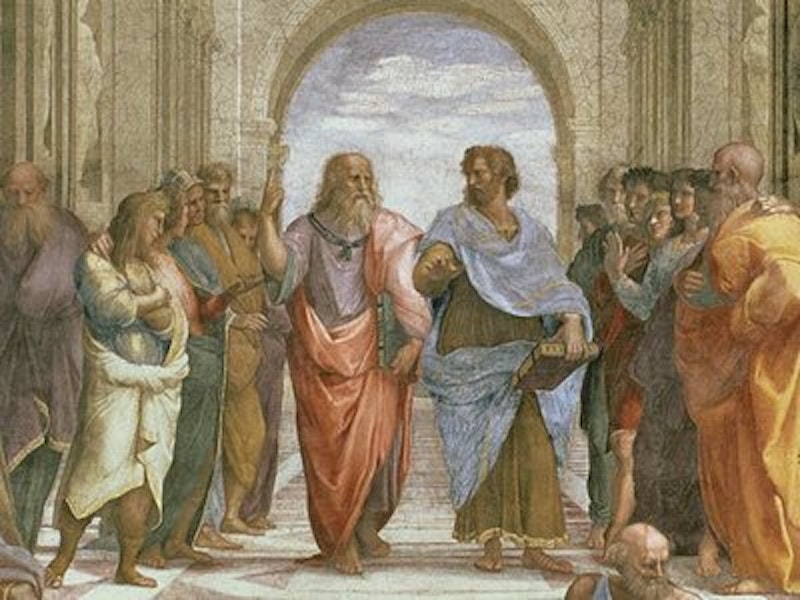 Socrates stands at the headwaters of the western philosophical tradition, yet casts his shadow as much over the present age as his own. Athens in the Fifth Century BC gave fitful birth to democracy in a time of massive social and economic upheaval. Democracy in Athens and the larger Hellenic world was a short-lived, flawed, often violent experiment, yet few political ideas have exerted a more profound influence over the course of human history. During the pivotal decades of Athenian democracy Socrates issued a relentless critique of his city’s system of government and the culture it promoted. For this he was executed.

Socrates’ criticisms of democratic institutions and leaders came through a process known as dialectic, from Greek dialegomai, “to discuss,” “to hold a conversation with,” “to argue.” Writing nothing himself, Socrates approached the people of Athens directly, questioning them on the nature of justice, beauty, and other ideas.

On a typical day Socrates would visit the bustling marketplace of Athens with no definite plans, draw himself or be invited into serious conversation, and spend the day (or as much of it as he was able) questioning others about what they claimed to know. These conversations excluded no one, and many of Plato’s dialogues show Socrates talking with friends and acquaintances; however, he rarely seems to have missed an opportunity to address the important men of his city or the celebrated personalities who frequently visited it. As one might imagine, many (especially the indolent sons of wealthy men) gathered to witness these conversations, leading as they often did to intellectual and emotional fireworks.

At the heart of Socrates’ philosophical method was a commitment to shared investigation of one’s most deeply held convictions, as well as the interrelations between them. This usually took the form of a refutation, or elenchus, wherein an apparent (and often self-described) expert was revealed not to know what justice or beauty was, after all.

In one famous example, Socrates encounters the religious seer Euthyphro as both men are heading to court. Socrates, who is en route to face charges of impiety, asks Euthyphro for a definition of piety to help him in his own case. Euthyphro not only claims expertise on the matter in general, but is actually on his way to prosecute his own father for a charge of impiety as well. Socrates merrily refutes a series of flimsy and conventional definitions before Euthyphro informs him that he must leave in order to arrive on time for his trial, despite admitting that he cannot define the concept around which the whole business revolves!

It’s not hard to understand how those whose reputations, and often their livelihoods, depended upon expert authority resented such public humiliation. What’s more, Greek culture had given rise to another mode of thought and debate with which Socratic dialectic was often identified: sophistry. Sophistry was, by its own lights, a rhetorical method by which “the weaker argument could be made the stronger.” It served as preparation for entrance into the deeply competitive world of democratic politics, a means to carry an argument without merit in the face of a less skillful rhetorical opponent. Wealthy Athenians paid great sums of money to have their sons tutored by travelling sophists. Many saw little difference between what Socrates was doing (which he called philosophy, or “love of wisdom”) and the rhetorical tricks of the sophists; the comic poet Aristophanes made the point directly in his immortally savage The Clouds.

Yet Socrates not only vigorously denies his (or anyone else’s) ability to trample truth with mere rhetoric, he attacks the very culture upon which it is based. To this point, the crimes of which he is accused are not discretely personal, but social: disregarding the gods of the state, inventing new gods, and corrupting the youth.

Socrates’ own view of the matter (delivered in Plato’s Apology) is as funny as it is apt. He compares Athens to a large, well-bred horse that has grown fat and lazy, while he styles himself a gadfly who stirs it to salubrious activity by his constant (but unwelcome) stinging. In the end, Socrates’ stubborn, ironic, and confrontational final harangue ensures that he’s condemned to die, but his death likewise ensures his immortality.

The political and rhetorical climate today is as plagued with sophistry as it is with misinformation, yet we also exhibit no shortage of would-be gadflies. But are they necessarily good for us? From seemingly every side of every debate, intelligent, honest people can be seen talking past one another, seizing only upon those elements of another’s argument that most offend them, and thereby demolishing in toto points of view whose nuances they have no intention of revealing or understanding.

To be sure, many influential individuals are peddling lies, as far as we can tell. Their motivations are generally as self-serving as they are obvious. I won’t argue that every perspective ought to be viewed with the same claim to legitimacy (a point Socrates repeatedly brought against the democracy of the Athenians two and a half millennia ago), nor that we ought to suffer the lies of the deceitful in silence.

It is possible, however, that our era needs more than a “despotic logician,” to use Nietzsche’s phrase. In The Birth of Tragedy, he writes that Socrates first demonstrated “…the imperturbable belief that thought, as it follows the thread of causality, reaches down into the deepest abysses of being, and that it is capable, not simply of understanding existence, but even of correcting it.”

This impulse not only to illuminate, but to rectify the world we discover by thought alone strikes me as sadly characteristic of public life and dialogue today. Socrates’ dogged rigor, his intolerance of specious argument, and his commitment to intellectual principle in the face of resentment, lies, and even death remain as heroic today as they were in his own time. However, his example offers little guidance for how one might positively engage with a society that seems no less adrift than his own, and far more perilously so.

Many successful careers, and many of the views we cherish, are sustained by slashing to ribbons the arguments of all who dissent from some privileged intellectual vantage point. The authors of such broadsides rarely fail for being demolished in the eyes of their detractors. On the contrary, demolition is often a prerequisite for sustained success in a culture nearly deafened by its own noise.

The life of Socrates offers us another example we might emulate, an attitude to cultivate that might help save us from our worst tendencies of tribe, creed, and intellect. Socrates is famous both for his claim to know nothing, and for the pronouncement of the Delphic Oracle that no man was wiser than he. These apparently contradictory statements find their resolution in the fact that Socrates does not claim to know what he does not, in fact, know, an attitude known to the Greeks as aporia. In dialectic, aporia means puzzlement, perplexity. It enjoins upon us a suspension of judgment, which Socrates carries to its absolute limit in his claim to know nothing.

Our own era will not tolerate Socratic aporia. Our problems are too real, our danger to great. To ignore our responsibilities in the face of suffering and scarcity, when so much can be done to alleviate the causes of human misery, is both dishonest and unethical. We have already entered an era when human irresponsibility endangers us all. We cannot claim ignorance of what will happen if we continue on our current path without examining the science, politics, economics, and morality of our attitudes and beliefs.

We can, however, admonish ourselves to avoid totalizing viewpoints and the despotism of our logic. We must do so if we are to halt the slide into cultural anarchy and the totalitarian response it inevitably provokes. Without abandoning the spirit of dialectical analysis, especially self-analysis, we must embrace a spirit of shared commitment to human welfare in the broadest possible terms, a willingness to tolerate the limits of our own understanding.