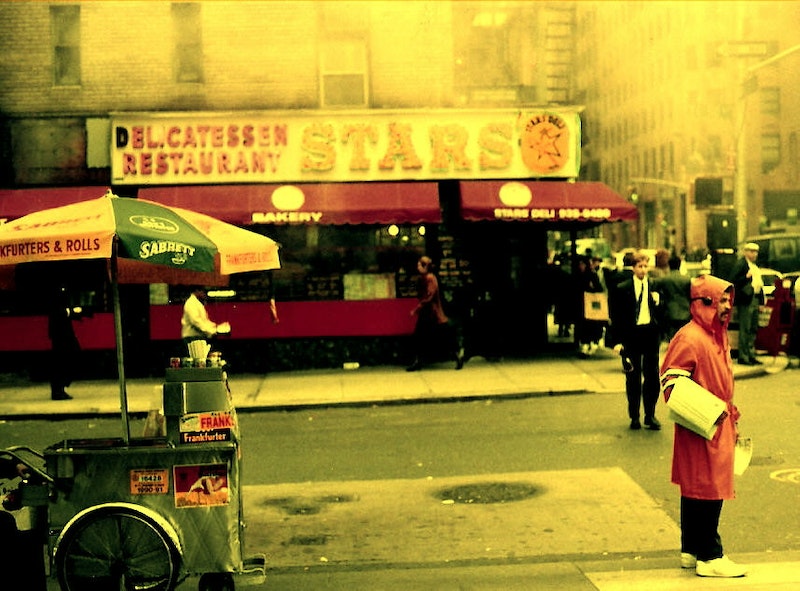 One might think that a day without food might not trouble the system. How many centuries of human beings have survived one day without food? And yet, privileged creature that I am, one day without food is troubling. I cross to the street’s other side. The café aromas too strong, too sweet. Stopping with an old friend mid-day and allowing myself coffee.

An hour later, I’m in line. With the other San Franciscan Jews, the native SF Jews, the NYC orthodox, the NYC secular, the LA new-age Jew, the Israeli transplants, the Boston half-Jew, the bearded Chicago hip/hipster Jew, the Leonard Cohen Jew-Bu and the rest of the diasporic folk: we all wait for our Jew-food.

2:45 p.m.: three hours not to listen to the body. I am trying not to drool-stare at the baked goods, the bins of bagels, the lox on the scale, the black and white cookies, and the apple hamantaschen.

The menu lists kugel, knishes, under “Sandwiches” pastrami, roast beef with horseradish, turkey, and whitefish salad. The young cashier has just slammed his hand in the register. He’s trying not to show the pain.

I ask him if he’s okay. He half-heartedly attempts to put ice on the hand, but then stops and asks what I’d like. I say, “Do you have any kugel?” He walks over to some crumbly cookies in a package. “You mean these?” I guess the Jewish cashiers have the day off and only the Gentiles are behind the counter today. The woman in line behind me with the baby gives me an eyebrow raise and a smirk. I say, “No, that’s okay,” trying to quiet my stomach. “Can I get two spinach-mushroom knishes?” He looks around. “We’ve got some frozen,” he says, trying to shake the pain out of his hand. “Okay,” I reply. I pay for the knishes and the black and white cookie (Natasha’s old favorite) and an apple hamantaschen.

I head back to the car, wobbly-legged and light headed. I get to the garage. The landlord’s car is blocking the driveway. The painter sticks his head out the window. “The Carl is in 206! The Carl has a meeting with the couple about the place. You can park here, then switch later, yes?” I say, “Okay.” I park. I grab the things from the trunk and juggle them inside.

Yom Kippur provides me half the reason, an attempt to eat less in general the other half. There are only so many consecutive years one can hope to lose 15 pounds. I’m not going to temple. I haven’t been in a long time. This is as Jewish as I get. Fasting. Buying Jewish food. Kvetching about it.

I’ve had one glass of orange-cranberry juice, three cups of coffee, two cups of sparkling water, and I’m allowing myself more juice as we hit the home stretch. I’m preparing the dinner for us, not a joyous feast with guests. Natasha is napping on the couch. The spinach-mushroom knishes are in the oven. The asparagus is in the double-boiler. The salmon is mixed in the bowl, with the mayo and the lemon juice, the dill, breadcrumbs, and garlic. Ready to fry in the pan. The fresh challah has been sliced. I’m anxious.

I try to imagine the student who went to school today without breakfast. The twelve-year-old seventh grader I tried to tutor back at the Boys and Girls Club two years ago. He was having none of it. Wondering who I was and why I was at his Boys and Girls Club. Tough to gain the trust of a student you don’t see very often. The student who borrowed money from his friend the day before. Who took the flaming hot Cheetos from the convenience store and stuffed them in his fireproof backpack. He’s on the couch, texting his friend about how hungry he is. He waits for someone to arrive, hoping there are groceries this time.