Is it real or are we kidding ourselves? 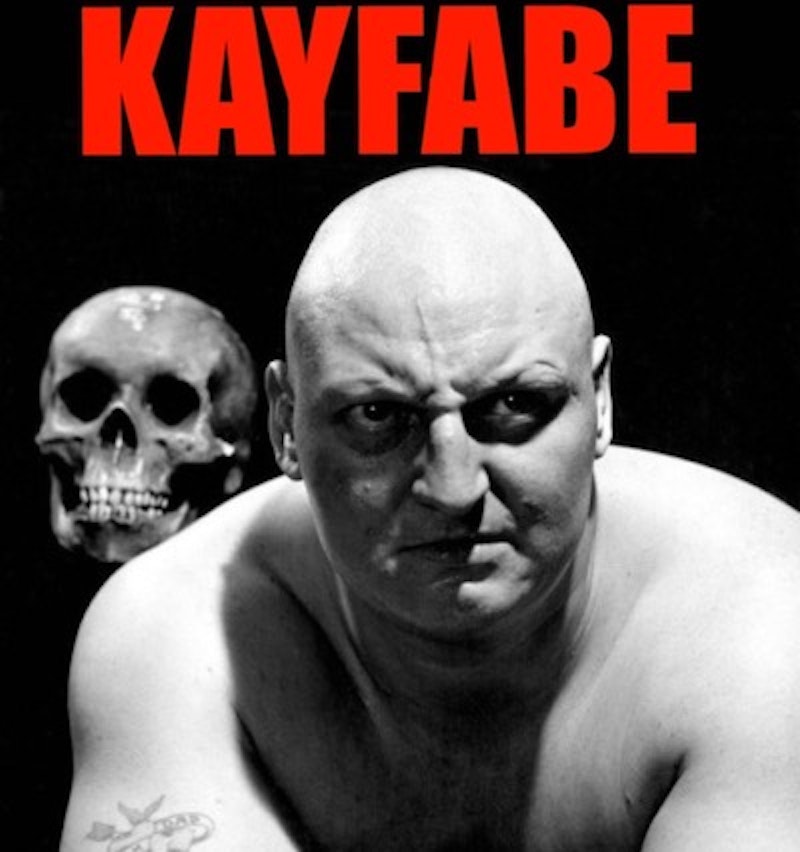 What's with kayfabe? Apparently more than jibes with the dictionary definition. An obscure word to the uninitiated, absurd and possibly derived from pig Latin or some similar archaic jargon. A code word used in the pro wrestling industry to alert or warn those in the know about false pretense aimed at wrestlers who break character. Whether live or behind the scenes. It's a racket with marks and stooges. It’s been noted that there was a wrestler named Kay Fabian. Better known as Boris K. Fabian, who began his career in the late-1950s. The name also appeared on posters as an all-purpose fill in the blanks for so and so contender vs. Kay Fabian. Theories abound on the word "kayfabe" and grammarians expound on its original usage. Carnival carneys used the name Kay Fabian in collect phone calls home so the party on the receiving end could reject it. Letting the callee know they were alright without the expense of long distance charges to the family.

In pro wrestling it's a term defining working, as in work the game. Play the part. A term used by wrestlers who portray the heroes and villains of the scripted, staged and rehearsed sport of wrestling. Bigger-than-life actors who break character on camera or in front of a live audience. Talking smack and screaming in announcers’ faces to the delight of berserk fans who swear allegiance to their favorite wrestling superstars.

My Sicilian grandmother was a faithful fan of pro wrestling in the 1960s heyday. She sincerely wanted to believe it was all real. Tuning in every Saturday afternoon to the local tv station or in attendance watching under the spotlights of televised matches. In the squared circle front row when the big show came to town at the Baltimore Civic Center. Her hero was an Italian-American wrestler named Bruno Sammartino. He was one of the heavily-promoted good guys in the sport. They travelled across the country with marks, heels, crooked promoters and ringers with goofy names like Gorilla Monsoon and King Kong Bundy. These cartoon grapplers pretended to beat each other up every night in the make-believe contact sport of grudge matches and contrived contests vying to win a gold and jewel encrusted belt.

My granny was right there at ringside, swinging her clunky leather purse at the villains. Connecting fierce blows upside their heads once or twice before the security guards could strong-arm her back to her seat. She swore in broken English and cursed them all in Italian. The crowd roaring with jeers and laughter. I don’t believe that her antics were rehearsed. It’s probable every town had an angry old lady attacking the bad guys for comic relief. I remember seeing her on television one Saturday beating the hell out of Haystacks Calhoun. A behemoth wrestler who wore giant overalls and a straw hat. The epitome of a hillbilly redneck turned wrestler. Cheering on her hero and later crying tears of joy when Bruno Sammartino claimed the heavyweight title of the world.

In the mid-80s I was seduced by the likes of Hulk Hogan, Rowdy Roddy Piper and Randy Macho Man Savage in the steel cage death match events at the very same Baltimore Civic Center. The same place I also saw the big name rock ‘n’ roll acts who blew through town. Sitting in the nosebleed seats swilling 64 oz. tubs of beer and smoking joints. Rooting on the favorites screaming and booing the culprits with the assembled rabble just like granny did a quarter century before me. An imaginary blood sport, it was all in good fun. The culprits who promoted these dastardly mock competitions are The McMahons who came from a long line of swindlers and con men that promoted the “sport” since its humble beginnings in the early-1900s.

There’s a connection along the historic timeline where wrestling became too huge like some rock ‘n’ roll circus sideshow run amok. The lines blur between a legitimate sporting event and a mega heavy metal rock concert. Where reality is always subjective and left to speculation. Calculated meditations on morality, racism, greed and the brotherhood of big sweaty scantily-clad he-men. Blatant parallels of good versus evil in spandex with greasy hair. Homoeroticism bulging muscles and raspy voices spouting pure evil. Somebody like Captain Lou Albano can crossover into MTV land and make music videos with the likes of Cyndi Lauper and NRBQ, who immortalized the good captain in a tribute tune aptly named “Captain Lou.”

The gravel-throated Freddie Blassie recording his original songs, “Pencil Neck Geek” and “US Male.” The film The Wrestler starring Mickey Rourke as a washed-up wrestler fighting for his soul is a fine example of the dream gone sour. Or maybe the real specter of war looming forever in the wings along with USMC Sergeant Slaughter and the Arabian Iron Sheik in the eternal battle over oil, money and the American way of life.

Today’s world could be part of a creepy performance art display by Andy Kaufman. He could have breakfast with Freddie Blassie, get beat up on David Letterman by pro wrestler Jerry Lawler and also proclaim a challenge that he’d wrestle any woman on earth and win. Lately a rumor’s been making the media rounds that Donald Trump is really Andy Kaufman. That’s about as believable as actor Morgan Freeman is Jimi Hendrix. But then this is the modern world where nothing makes sense any longer. Is it real or are we kidding ourselves?

Trump also had a bit part in the WrestleMania craze. In 2007 he was knocked down and out in the ring with a patented move named “The Stunner” by Stone Cold Steve Austin. The President is on his way to being knocked out once again. The crowd is screaming for blood. People are actually praying too. Good guys and bad guys, you be the judge. It’s all Kayfabe to me.