Is Michael Brendan Dougherty Going Soft on Ukraine? Are We All? 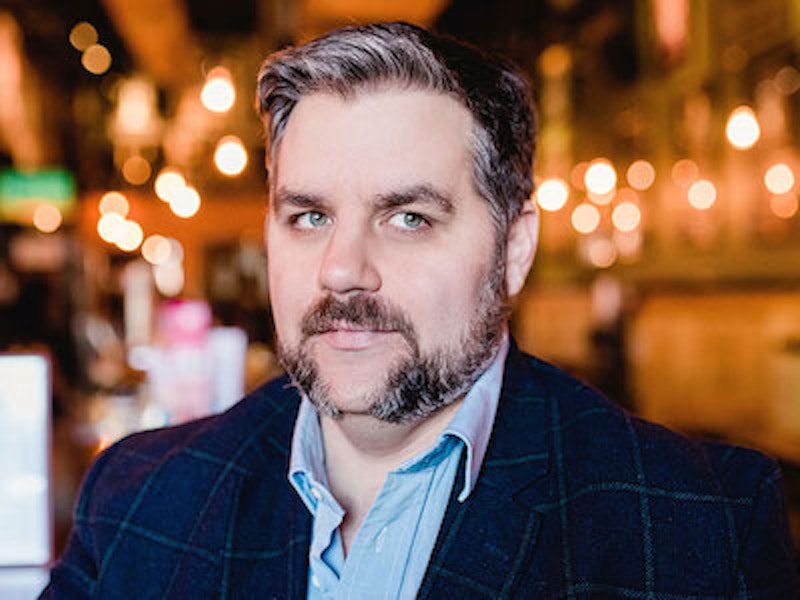 As I write this, the Queens pimp faces impeachment over the Ukraine-Biden business. The most likely consequence of what I’ll call Little Russiagate will be that Biden’s forced from the race, possibly aiding the pimp’s reelection chances.

What concerns me most about this mess, though, is that Ukraine is at the center of it. From both a paleoconservative and far-left perspective—from the perspective of that portion of the Venn diagram that we on the far right share with our far-left brethren—this could be fateful. It’s the contention of those of us who occupy the “brown-red overlap” that Ukraine—I should say THE Ukraine, but let us observe the AP-style proprieties—is a demon state, populated by fascist subhumans and “run” as an anti-Russian project by the intelligence agencies of the Western neoliberal imperialist powers.

We’ve had a good run with this “narrativization,” as a literary scholar might put it. It’s kept morale up in brown/red circles, functioning as a tool for rallying the cadres and keeping them feeling tip-top.

What I’m wondering now, however, is how Ukraine’s ascension to the forefront of the American consciousness—a place it hasn’t occupied since the 2014-2015 Maidan events forced from office the magnificent reformer and anti-Nazi humanitarian Viktor Yanukovych—will affect our anti-Ukrainian propaganda project. As Ukraine and its new Jewish president emerge as the hapless victims of White House strong-arming, will it become harder for us to demonize that miserable country?

Take Michael Brendan Dougherty, for instance. This star paleocon pundit has long cast vague aspersions on the Ukrainians, with a passive-aggressive tenacity that could lead the uninitiated to think that he is, like me, a Russian Orthodox convert, and not the Roman Catholic that he in fact happens to be. Dougherty has at times come close to suggesting that the fascist Ukrainians morally lack the right to the western, formerly Polish, part of their country, including Lviv. The implication is that this region should revert to the Poles, his co-religionists.

I’ve had my criticisms of Dougherty, even beyond the matter of his Roman Catholicism. But on the Ukraine issue, arguably the most important foreign policy issue to us paleocons—because it speaks directly to the imperial prerogatives of Russia, that holy citadel of virtuous illiberalism—Dougherty has been sound.

And now comes this, from this great intellectual’s Twitter feed just this week. Certainly, it can be read as passive-aggressive toward the Ukrainians; but its generally sympathetic thrust is the more salient thing to me, and seems sincere: 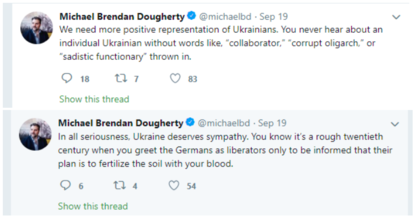 Is this effusion something to get alarmed about? Maybe not. It might be nothing. It might represent little more than some errant Twitter spouting, something for Dougherty to do with his big Fenian thumbs.

On the other hand, Dougherty might be a bellwether here, and we might be facing a terrifying tendency among Dougherty and other right-wing intellectuals to accept the basic humanity of the Ukrainians. Such acceptance could have dramatic consequences for our movement’s ability to maintain a steely ideological front in support of glorious Russian brutality, chauvinism, and imperialism—in the Donbass, in Crimea, and in THE Ukraine (there, I couldn’t help it) generally.

My Russian Orthodox priest Father Nicodemus, I should note, took issue with Dougherty’s tweet on factual grounds, pointing out that, contra Dougherty, Ukrainians have long been spoken of positively for certain things—such as producing first-class girl-on-girl smut. Ukraine’s lesbian smut, Father said, is of a quality that only the lesbian smut of the Estonians—with their many blue-eyed womenfolk kept slender by their diets of rye bread and herring—can rival.

“So you see,” my wonderfully bluff, bearded priest wheezed with a fetching shrug, “even the vilest cockroach filth has value in the Lord’s creation.”

In other news, I’ve launched another attempt to grow a beard, and hope that my facial hair will be fully realized by the Feast of the Venerable Barlaam of Keret! My plans are to cultivate a complete beard, with the exception of my chin, which I will shave clean. More to come about this exciting tonsorial development!