It's About Who I Was and Am

On organizing my comics collection. 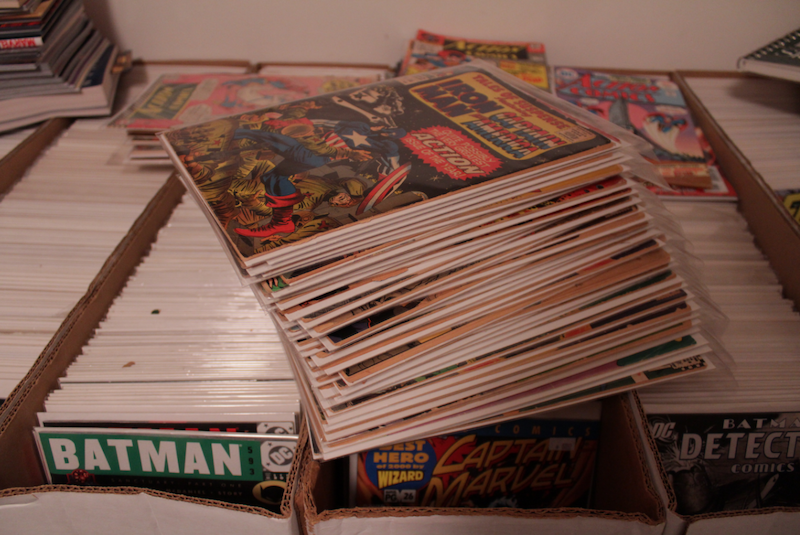 I shouldn’t have been so surprised. While finally organizing my comics collection I’d stumbled on a copy of Marvel Super-Heroes #8, the first appearance of Squirrel Girl. At the time the book was published, it was a fringe anthology title seemingly designed to clear out inventory stories. Decades later, a character introduced in the book was holding down her own title and appearing in cartoons and video games. Curious, I’d checked how much it was going for, and was taken aback to learn mint copies sold for hundreds of dollars.

My copy was hardly mint, but it was still a nice thing to come across, something to tuck away and reasonably hope would make my nieces a bit of coin when I was gone. I’ve found a few other gems like that in the process of setting my comics in order. More importantly, though, I’ve realized a few things about the whole process of collecting.

A few months ago I’d moved all my comics into one room of my apartment: a dozen long boxes, plus several hundred more comics stacked on top of the boxes, plus three bookcases full of trade paperbacks, hardcover collections, digests, and yet more individual comic books. When I’d first got all the comics in that room it was part of a larger shifting-around of things in the apartment, and I was mainly concerned with figuring how to organize space—whether the books I had would fit on the shelf space available. That determined, I didn’t bother with getting things more orderly. Now I’ve begun the process of doing that.

Which has meant a three-step process. First, dividing up my comics into stacks. Second, working out which stacks belong with the other stacks. Third, sorting those stacks. I spread out the comics across the floor, making a stack of Avengers here, a stack of Legion of Super-Heroes over there, and so on. Stacks that seemed vaguely related to each other then went into a box together: Captain America with its spin-offs, and also with Thor and Iron Man, and all their spin-offs. Once I’ve got all my boxes finalized, I’ll make a list of what’s gone on each shelf and in every box.

Hang on, though. That all sounds obvious, if complicated by the fact that over more almost four decades of reading comics I’ve ended up with thousands of them. But it skims over the interesting point of ordering the books: making choices.

Start with how I make stacks. Mostly that’s by title, but not entirely: I already had shelves dedicated to books by Alan Moore, and I wanted to do the same with some other creators—Jack Kirby, Neil Gaiman, Grant Morrison, a number of others. Some of the stacks were divided by creator. I decided that it mattered more to me to have Kurt Busiek’s Avengers run on a shelf with Busiek’s other work rather than be sorted with other Avengers comics.

What I realize, now, finally, is that part of the pleasure of having a comics collection is making these choices about how to organize it. Having to think over how the comics relate to each other, and how I expect to be reading them in the future. Take those Avengers issues: in many ways they reflect the three decades of Avengers comics that preceded them. But then they also have a lot to say, I think, about Busiek’s longstanding engagement as a writer with super-heroes and the super-hero genre. I decided it was more useful to put them in the context of that work rather than in the context of Marvel continuity. Other collectors might think otherwise.

In comics, different creators may have runs on the same character. And publishers often tie their various characters together. For each individual comic I had to decide what connections are most important. What did it go next to? Where did it belong? I was making a series of critical judgments about each book. Organizing the comics meant thinking about them, engaging with them, seeing what the connections were: why Captain America makes sense in a box together with Thor and Iron Man.

It meant deciding what work mattered and why. I knew that Alan Moore was a creator that mattered to me. I was a little surprised to find how much Marv Wolfman and Gene Colan’s run on Tomb of Dracula still matters to me, along with related work on the same character by other hands. That’s a book I was buying out of back-issue bins as a teenager, but to which I’m still attached; a work I can’t put behind me.

Ordering these books I’ve realized that I’ve been buying comics for so long the collection’s become a reflection of myself, not just currently but as I have been across time, a four-dimensional image of me built up by selecting and preserving the art and stories of other people. Most of the Marvel books I bought years ago, for example. I have almost a whole long box of Spider-Man books because he was my first favorite super-hero, and when I started buying comics I gravitated to the character. I have a ton of Doctor Strange comics because he was my second favorite super-hero, and when he became my favorite I was young enough (and comics cheap enough) that I could buy comics I didn’t much care about just to keep up with the character.

I can see how my tastes changed as I aged, marked out by early Vertigo comics—all those Gaiman and Morrison runs—and early Drawn & Quarterly titles from Seth, Chester Brown, Joe Matt. I can, incidentally, see changes in how comics were conceived: coloring technology getting more sophisticated, paper stock changing, trade paperbacks becoming more common. And I can see how I reacted to that, what things I chose to focus on.

In organizing my comics, then, I’m organizing an image of my own life. I’m sorting out what I think about my past. What should be stuck in a box, and what goes on display on bookshelves: what I want people to see of me, but also what I expect to be coming back to. I’m deciding what’s important. And, sometimes finding things I’d forgotten: wonderful little stories tucked in surprising places—an old issue of Teen Titans Spotlight drawn by Colleen Doran, Peter Kuper’s wordless miniseries The System. Buried among hundreds of other comics these things have become unexpected treasures; like coal deposits turned to diamond by the pressure of geological forces, or by the strength of Superman’s clasped hands.