Medallions of the Hemisphere

You’re not supposed to call it 6th Avenue, you know. 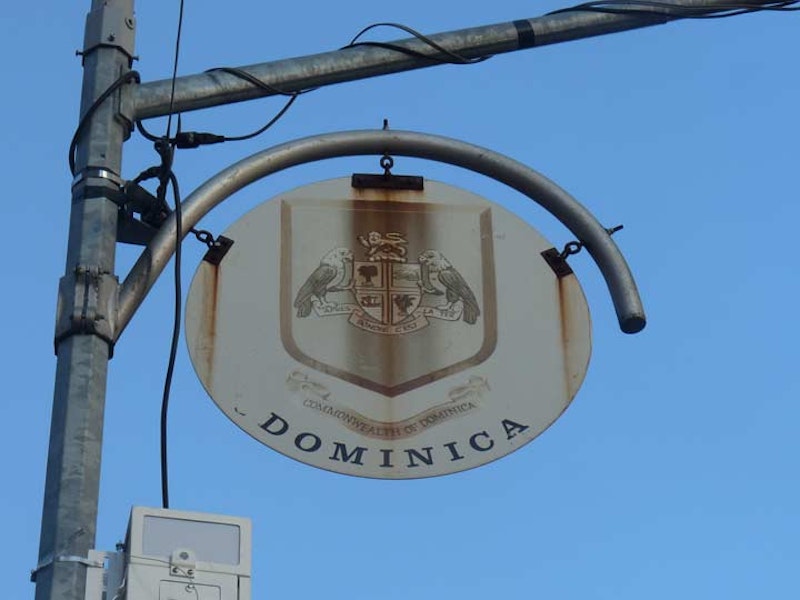 6th Avenue has a rather involved history. It has been extended both northward and southward and has been renamed twice. Before the late 1920s, 6th Avenue ran from Carmine and Bleecker Steets north to Central Park. When the IND 6th Avenue Subway began construction, the City decided to extend it south along its own right-of-way south to Church Street. Unlike 7th Avenue’s earlier southern extension which was named 7th Avenue South, 6th Avenue retained its name all the way south, necessitating every building located on it to get a new house number.

In 1945, Mayor Fiorello La Guardia renamed 6th Avenue along its entire length south of Central Park “Avenue of the Americas.” Some histories indicate it was done in honor of the new Organization of American States, but the OAS didn’t have a charter until 1948. North of the park, 6th Avenue was also laid out, but it wasn’t known as 6th for long. In 1887, it was renamed for wealthy art and book collector James Lenox, whose holdings in part established the New York Public Library. 100 years later, Lenox Avenue was subtitled Malcolm X Boulevard in honor of the civil rights activist slain in 1965. This means that every iteration of Sixth Avenue has had a name with the letter “x” in it.

After several generations of street signs tried, in vain, to imprint the Avenue of the Americas moniker on New Yorkers, in the 1980s the Department of Transportation gave in and installed “6th Avenue” signs along the street. In the late 1950s, when modern octagonal-shaped aluminum lampposts began to appear on 6th Avenue, Avenue of the Americas started to truly live up to its name, as dozens of distinctive medallions bearing the flags of dozens of nations in North, South, and Central America made their appearance on the new poles. Various rebuildings and reconstructions of ‘the A of A’ have whittled away at the medallions, which in some cases show former friends whose relationship with the USA has, shall we say, changed since 1945. There are also likenesses of historic South American leaders scattered along the avenue between Canal Street and Central Park, including Juan Pablo Duarte, founder of the Dominican Republic; José Gervasio Artigas of Uruguay; José Bonifacio de Andrada e Silva of Brazil; and Simon Bolivar, José de San Martin, and José Marti at 6th Avenue and Central Park.

Today, the “medallions of the hemisphere” can still be found along two different stretches of 6th Avenue, each miles apart from the other, from Grand Street (where a United States medallion can still be found) in SoHo north to Washington Place in the Village (where you will find a Canada) and again from West 56th Street north to Central Park South. There were medallions along the entire stretch of 6th Avenue until the early 1990s, when a lamppost replacement program, which left a flock of Bishop Crooks in some stretches, wiped out many of the signs. Their whereabouts are debated and I have never been able to ascertain exactly where they are being stored if they are indeed still in existence.

Each medallion depicts the heraldic coat of arms of an OAS member country. Most of the signs are now over 50 years old (some new ones were installed in the 1970s) and bear considerable weathering and rust, but all remaining signs are still readable. They are mounted on crescent-shaped masts found nowhere else in New York City.

Pictured above is the medallion for Dominica. Not to be confused with the Dominican Republic, which occupies the eastern 2/3 of the island of Hispaniola, Dominica is an island about halfway between Puerto Rico and Trinidad and Tobago. The last of the Caribbean islands to be colonized by Europeans, it passed from France to Great Britain in 1763, which made it a colony in 1803. After suffering under corrupt dictator Patrick John and devastated by Hurricane David in its first two years of independence, Dominica stabilized when Mary Eugenia Charles was elected as the first female head of state in Caribbean history; she remained in office for 15 years.

On the medallion is a shield in gold and blue with four symbols: a coconut tree in the upper left, a frog in the upper right, a canoe with sail set in the lower left, and a banana tree in the lower right, with two Sisserou parrots on either side and a walking lion on top. The banner bears the French phrase, Apres Bondie C’est la Ter (“After God It Is the Land”). 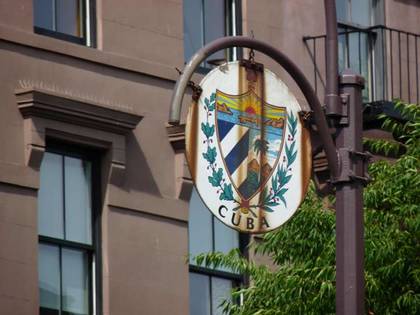 Cuba is the most westerly of the West Indies islands and is about 90 miles south of Florida. The island was "discovered" by Columbus, sailing for the Spanish flag, in 1492. He found a tribe of Indians called the Ciboney; by 1600, the tribe was virtually extinct.

Beginning in the mid-1800s, Cubans engaged in two wars of independence against Spain. After the Spanish-American War, the United States installed a governor but relinquished power to an elected Cuban government in 1902. In 1933, Fulgencio Batista took power in a coup and held it until 1959, when a guerilla campaign led by a young lawyer named Fidel Castro overthrew him. The Soviet Union and the USA went "eyeball to eyeball" over the presence of long range nuclear missiles there in 1962.

Cuba’s national coat of arms is shaped like a pointed shield and divided into three sections: in its horizontal upper part there is a golden key between two mountains, and a sun rising over the sea symbolizing the position of Cuba between the two Americas, amidst the emergence of a new state. The blue and white stripes down the left hand side represent Cuba’s colonial period; down the right hand side, a Cuban country scene is dominated by a palm tree, meant to represent the character of the Cuban people. 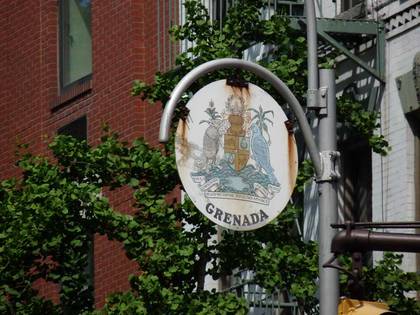 Perhaps most famous for its invasion by US forces in 1983 after a Marxist military overthrow of elected Grenadan leader Maurice Bishop, Grenada had been under British control since 1762, when the Brits captured the island from the French until granted independence in 1974. It is the southernmost of the Windward Islands in the West Indies northeast of Puerto Rico. Known as the “spice island”, a nutmeg is featured in Grenada’s flag; nutmeg is Grenada’s chief export.

Grenada’s coat of arms shows the Santa Maria, the flagship of Columbus’ fleet, an English lion. The crescent, out of which comes a white lily, is a symbol for the Catholic population. The seven flowers on the helmet depict the seven parishes on the island. On either side of the shield is an armadillo and a Grenadan dove. The base shows the two mountains and the major lake (Grand Etang) on the island. The banner is in English and says: Ever conscious of God we aspire, build, and advance as one people. 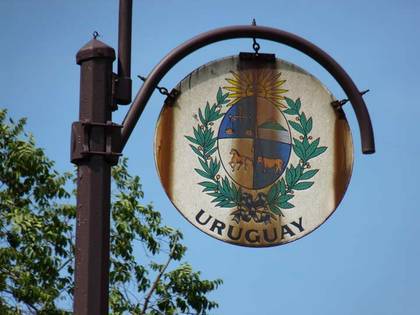 Uruguay has, perhaps, the most wonderful of all of South America’s countries’ names; in the native Guarani language, it means “river of painted birds.” The warlike Charrua Indians successfully ended off initial colonization of the area during the first great wave of European invasions in the 1600s, but the city of Montevideo was established as early as 1723. Though Uruguay was an Argentine colony by the 1820s, Brazil and Argentina contested over the valuable territory, with the Rio de la Plata containing important harbor waters. After Brazilian annexation in 1821 and a revolt in 1825, the British created the independent state of Uruguay in 1828 as a buffer zone between their interests in Argentinian and Brazilian expansion from the north.

The Uruguayan coat of arms features a quartered oval containing scales representing justice, a city on a hill (Montevideo, the capital), and a horse and ox for liberty and plenty. The symbols are contained in alternating blue and white cantons, or backgrounds. The Sun of May overlooks all. 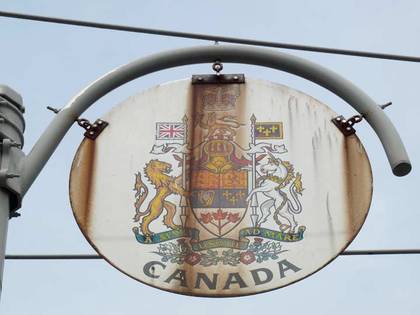 The name “Canada” most likely arose from the Iroquois word kanata, meaning “a group of huts.” The French originally called it New France.

Though Canada is the second largest country in the world, it borders only one other (the United States), and most of its population resides within 100 miles of the world’s longest undefended border. Canada attained its present size in 1949 when Newfoundland narrowly voted to become a province, rather than become independent. In the colonial era, France and Britain vied for control over the vast territory, and eventually Britain won out, after the bitter Seven Years War in 1763. A substantial French population remained, especially in Québec, ever since, and periodically agitates for independence.

Canada has enjoyed a generally friendly relationship (with a touch of wariness) with the USA, but it wasn’t always so. The USA invaded British-controlled Canada during the War of 1812, but was repelled.

Canada’s coat of arms features a “rampant” (standing on hind legs) British lion and unicorn, holding an escutcheon, or shield, on which is shown three gold lions symbolic of England; a red lion for Scotland; an Irish harp; three golden fleurs-de-lis for France; and a sprig with three maple leaves. The Union Jack flag of England, a fleurs-de-lis flag, and the Latin phrase A mari usque ad mare, Canada’s motto “from sea to sea.” In addition, this coat is a historic one; the Canadian coat of arms has evolved repeatedly over time, and the one shown here was adopted in 1957; a revision was made in 1994 that made it even “busier.”