Avian Advice for the Trigger Happy

Rooster used to carry in the classroom, and has some suggestions for the future. 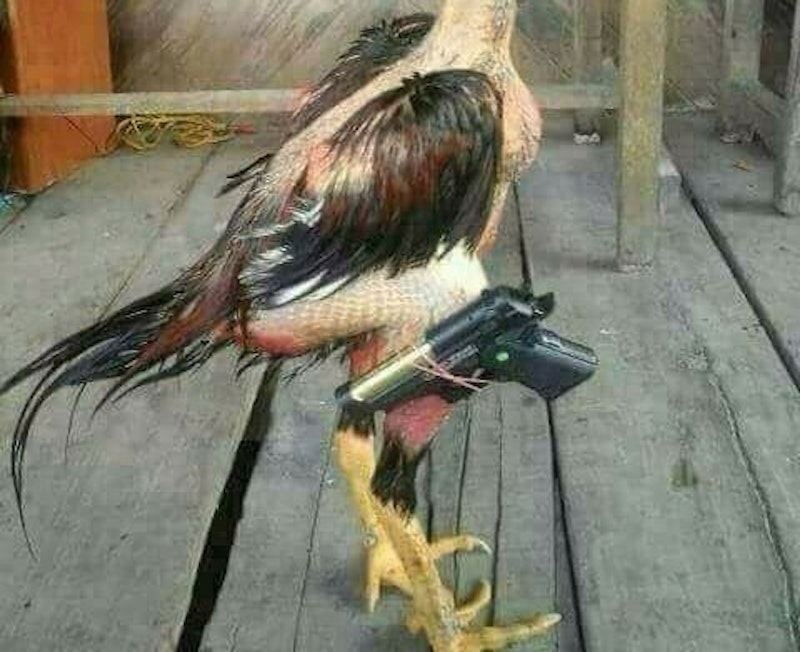 In writing my memoirs and serializing them, I’ve often focused on the more tawdry and salacious aspects and stories of my past and present, not only out of consideration for my readers but also for myself, as a repository for times I’d like to remember once my mind goes. It could be any decade now, but I feel good, healthy for my age, excited for the future, and still in love after all these years: Monica and I will be celebrating our sesquicentennial this May. I won’t spoil the fun or give you any teasers, but we’re going to have fun. Actually I should give Elon a call about that, not sure if I missed the deadline… anyway, in light of recent events, I’d like to share with you a time in my life when I was a teacher.

My colleague and close friend Booker Smith is a teacher, and soon he’ll be armed with a gun by the government, if I heard the President on the radio right this morning. I don’t know anything about automatic or semi-automatic rifles, but I trust Booker—others, hardly at all. Don’t worry, I’ve already written my congressional representatives and sent some “mysterious” packages to some important people, so I think I’ve done my part. Back in the 1960s, the country was much more fraught with anxiety and students were petrified by the possibility of being drafted for Vietnam. Now they have to worry about radicalized psychotics roaming the halls with first-person shooter precision. I don’t envy them. But in my day, teaching was no picnic.

I was armed when I taught English and American History in a Columbus, Ohio public school. I was packing, but they didn’t know it. Had to be protected from different groups: the Weather Underground, the Ku Klux Klan, Christian missionaries, UNICEF representatives. And then the acid casualties—oh my god. There was this one burnout in my 8 a.m. English class named Arthur who drove me crazy. When his head wasn’t planted on his desk, he was causing a ruckus, smoking cigarettes and blowing smoke into the throats of his asthmatic classmates. We didn’t have the word then, today he’d be called a “bully.” He never did any of the reading, sexually harassed his female classmates, and was always imploring me to listen to Pink Floyd’s “trippy stuff, not that Dark Side of the Moon shit. You know, Meddle.”

No, I don’t know, Arthur. I started calling him Garfunkel halfway through the semester because I noticed how much beachfront property was developing on his forehead, and when I saw his eyes go wide, that’s when I reached for my revolver. I never had to pull it out (luckily, because I probably would’ve been fired. Earlier than I was at least), but Garfunkel made me furious, and more than my gun, I had to resist the urge to spur claw the fucking brat more than a dozen times. Most of my other students were sedate, or sedated, high on quaaludes and skunk pot.

I was taking drugs at the time as well, but only ones that made me focus and improved my performance in the classroom. Stacy wasn’t going to do her history homework on her own, I had to stay up for hours at night on the telephone reading the Constitution to her as I continually interjected that these late night phone calls were entirely inappropriate and that she should stop initiating them. “But l love your feathers.” Eventually I got Monica to bug our phone so we could get it all on tape, because I suspected she was an infidel of some kind, and I was right: 20 years later, it came out that Stacy was helping the UNABOMBER buy supplies and making routine visits to his cabin in Montana. That’s love: helping your spouse covertly record phone calls to incriminate “difficult” individuals that pose a threat to the state.

So arming teachers now, today, with AR-15’s? Why not? I’m sane and normal, right? You’d trust Rooster with a gun in English class, right? Tell me I’m wrong. Tweet at me. I dare you. I fucking dare you. I dare you. I’ll show you I’m calm. I’m all smiles, baby. I’m smiling. I’m smiling right now. And that’s when I reach for my revolver: whenever anybody asks for extra credit. Ha! Kidding. Anyway I have to go, Elon’s calling me. Maybe he’ll have some ideas. I feel like laser guns might be better and safer. Or the laser sword from Halo 2. I’ve seen a prototype at Tesla headquarters and while they’re not as effective as the versions in the game, they do compromise enemies to a permanent end just as well. And sometimes that’s all you need: sensible violence. Take it from someone who’s spur-clawed but rarely fired in self-defense. Fuck the NRA, join the other NRA: National Rooster Association. I’m a member, why not you?