Maybe taking a little break will help me calm down. 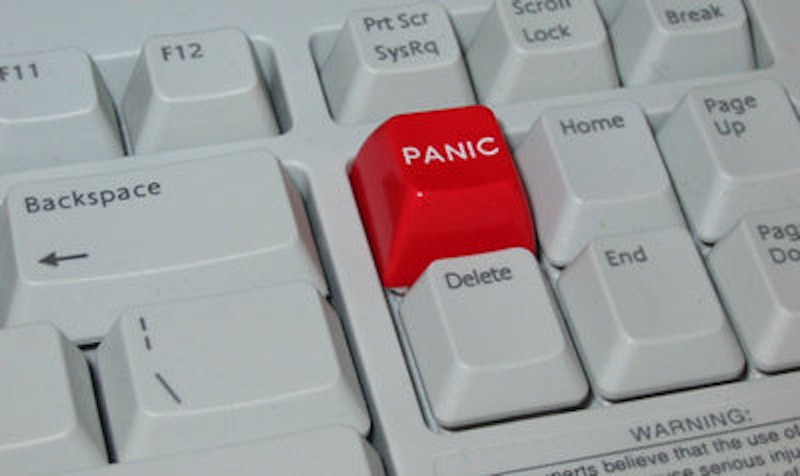 Saturday I came close to a panic attack.  My chest felt constricted; I kept having to take rapid breaths; I felt like I was going to burst into tears. So what incredibly stressful development had pushed me over the brink from everyday neurosis to complete meltdown? Was it a particularly pressing deadline? A financial setback? Some childcare crisis?

Nope. It was a vacation.

We're headed out to San Francisco this week. I've only been to San Francisco once, but it was lovely. My wife (who is already there for a conference) has been calling and telling me about the beautiful weather and the awesome food and how it is perfect and maybe we should just pick up and live there. My son is a little bummed about missing the last few days of school, but he's looking forward to seeing his Mom again after a couple days apart. And I'm eager to visit Aquarius Records for the first time—ground zero for all things music geeky.

So what’s is my problem? As a freelancer, taking five days off means that I don't work for five days. And, because of various hiccups with my largest client, my cash flow’s been somewhat dire for the last couple of months already. Put those things together and you have a recipe for gonzo panic and crazed anxiety dreams about being unable to get my son to soccer practice. Thanks subconscious!

Rationally, I know this is silly. Most of my issues with the client are more or less sorted out. Five days off doesn’t mean I can't pay my bills—which puts me in a much better position than a lot of people, many of whom probably whine less than I do. Similarly, while I'm nervous about how I'm going to negotiate writing and childcare over the summer, I'm sure we'll work it out somehow.

But if my anxiety is somewhat ridiculous, it at least puts me in line with my fellow Americans. According to Claude S. Fischer:

"Americans just don’t vacation like other people do. Western European laws require at least ten and usually more than twenty days. And it’s not just the slacker Mediterranean countries. The nose-to-the-grindstone Germans and Austrians require employers to grant at least twenty paid vacation days a year. In the United States, some of us don’t get any vacation at all. Most American workers do get paid vacations from their bosses, but only twelve days on average, much less than the state-guaranteed European minimum. And even when they get vacation time, Americans often don’t use it."

It seems like a combination of America's crippled labor movement and our apparently permanent regimen of financial insecurity has led us to a place where we all feel like we need to work all the time—so much so in my case that taking off feels more stressful than just staying glued to the keyboard.

Small businesspeople—which as a freelancer is what I technically am—often get pointed to as quintessential Americans seizing the reins of freedom and commerce, the scrappy entrepreneur's bravely innovating. And sometimes when I don't have to go into an office or put on a tie I guess I do feel a little free. All jobs are miserable in their own way, but freelancing's particular joy is uncertainty—and it's that uncertainty, not any sort of innovation or scrappiness, which makes it a more quintessential example of capitalism, in all its creative destructiveness.

Essentially, one of the primary ways I relate to my job recently is via terror. Maybe taking a little break will help me calm down. In the meantime, it's nice to know that my son is largely unfazed by his father's constant state of low-level panic. I mentioned that I was unusually stressed out, and asked him if he was feeling all right. He laughed at me. "Sure!" he said. "I'm fine!  I don't have to work!"