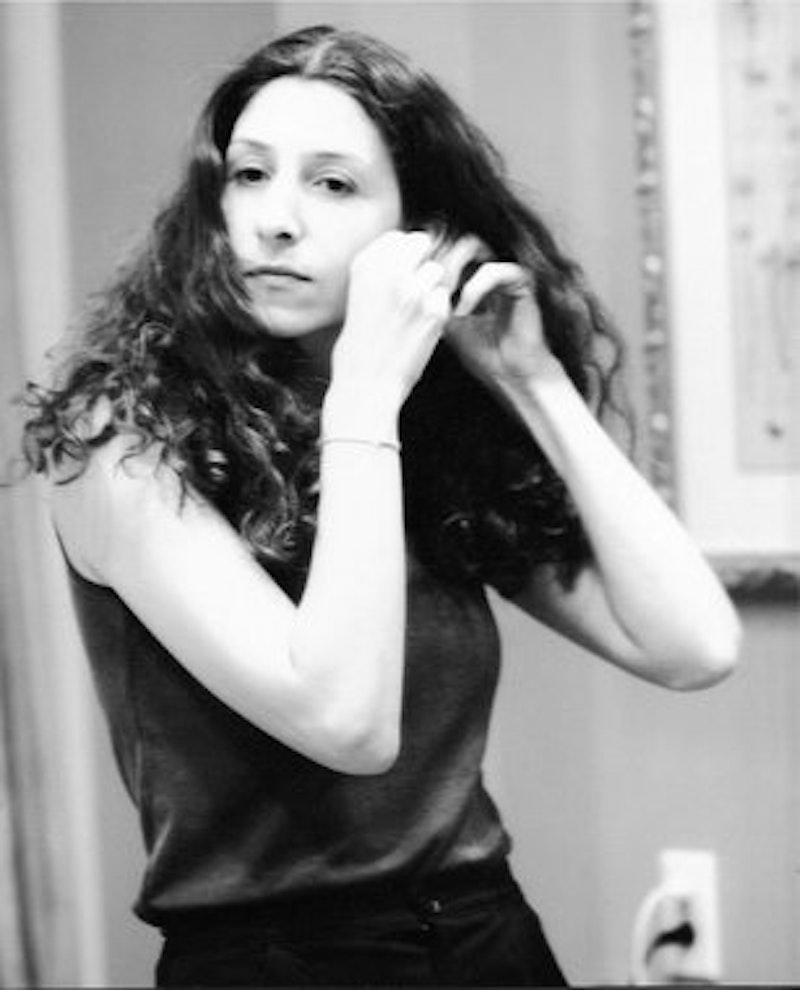 Five years ago, when this website first went live, I was scouring different publications for potential writers and came upon Iris Smyles, whose voice was peculiar and unique. She wrote many columns for Splice and then set upon writing her first novel, Iris Has Free Time, which was released last month by Soft Skull Press. The book is New York-centric, but not in the cookie-cutter form like so many other books that foul the marketplace. Smyles, 35, lives in the city and, after a teaching stint, now writes full-time. She has several ​events coming up in New York, Los Angeles and London. The following interview was conducted by email last week.

SPLICE TODAY: Early on in the book, the narrator says, “Almost everybody loves to be addressed by their first name, I find. It’s such a simple thing, and yet most people neglect to do it.” I think this is one of the novel’s themes: the disappearance of basic manners. No matter how much Iris drinks, or plays (sometimes) cruel jokes on others, her manners persist. When do you think Americans became coarser in their interactions with each other?

IRIS SMYLES: Like the decline of the Roman Empire, there are contributing reasons for the wearing away of social forms and historians would be hard pressed to attribute an exact date or single event to its beginning, but I would say the notion of “casual Fridays” has everything to do with it. Why is casual the ideal we all aspire to? Casual dress, casual greetings, and casual sex…

I shake hands, I do not address anyone by first name unless expressly invited to, and would never insult a host by showing up to dinner in jeans. Life is a special occasion—dress for it!

ST: Do you still watch re-runs of Law & Order? If not, what television shows do you watch?

IS: I go through intense phases, so I’m out of the Law & Order phase right now. Currently my favorite show is The Bachelor/Bachelorette. Couched in old-fashioned ideals of love and matrimony, it’s the most corrupt show on television. It’s also an “amazing” “fairy tale” that makes me feel like a “princess” and believe, finally, that I too “deserve love” with someone who’s “here for the right reasons.” I like to watch with a pad and pen, and record Bachelor stats—how many times each platitude is uttered per episode.

ST: I’d imagine that comparisons between Iris Has Free Time and the HBO hit Girls are commonplace. Do you see a connection? I’d say the stories in your novel are… well, subtler than the crack-you-over-the-head-with-a-beer-bottle plots of Lena Dunham. Comment?

IS: When IHFT was making its rounds to publishers, one editor rejected it writing, “I’m not sure Iris is best friend material.” My favorite writers and characters—Quentin Crisp, Celine’s Bardamu, Becky Sharpe, Henry Miller—were not best friend material either. They were loners, misfits, and iconoclasts, and I loved them for that. They are my best friends. Similarly, my character Iris finds solace in literature more than in life.

I love Girls and Sex and The City (to which IHFT is also often compared), but aside from surface details, Iris Has Free Time has little in common with them. Both these shows are at their core about female friendship. While Iris has plenty of friends (many of them male) and attends parties as much as she throws them, she is fundamentally lonely, an anti-heroine slightly at odds with the world she’s trying to navigate. Unlike Dunham’s Hannah, Iris would never call herself “the voice of her generation,” as she struggles with feeling largely out of step with it.

Girls is excitingly current; it depicts so well the way we (or rather, some) live now. Iris Has Free Time is less sociological; what I hoped to show through Iris is the way we’ve always lived regardless of when, to describe youth in a way that transcends generations; as Hemingway answered Gertrude Stein after she labeled his generation lost—“Every generation is lost of something.”

ST: One of my favorite aspects of Iris Has Free Time is that the book functions as a virtual tour of Manhattan. Whether by foot, subway, bus or cab, Iris and her friends end up on the Upper East and West Sides, Hell’s Kitchen, Murray Hill, the West Village, Central Park and on and on. How closely does the nomad style of Iris (the character) mirror your own life in the city?

IS: I’ve lived all over New York City and have gone through phases with different neighborhoods. Boyfriends, jobs, and lifestyle changes have brought me into an out of a variety of locales. What I love about the city is how places become haunted. I’ve only to visit the Upper East Side to feel the ghost of my ex-boyfriend holding hands with my 24-year-old self. Every New Yorker knows where his ghosts live; that’s what they’re looking at when they say wistfully, “You see that Starbucks, it was once a laundromat and I lived upstairs.”

ST: At one point, you write that Iris’ first day of teaching was the day before September 11th. No year is given. How long do you think Americans will continue to use the shorthand of September 11th or 9/11 and assume that no year is necessary? Ten years? Twenty-five years?

ST: Your characters, at least when the action is at the turn of the century, use the (mostly-forgotten) Friendster as a social media hangout. As someone who never waded in that particular gutter—but am on Facebook, for better or worse—what was it like and why did it fail?

IS: Friendster was basically no different than Facebook. Friendster fell, I think, because it imposed a particular user experience, it had a style. Facebook succeeds where MySpace and Friendster did not, because it is designed as just a tool.

It irritates me when people rail against Facebook. It’s like railing against hammers. A hammer serves a purpose; it’s good to have one around the house in case you need to nail something. Owning one does not connote any particular lifestyle. Having a Facebook page is similarly useful. You can use it as little or as often as you wish. It’s a modern yellow pages.

ST: You write: “Sometimes I wonder how it is that we are so young and yet find so many occasions to dedicate to old times?” Instant nostalgia! I think I’ll bust a rib the next time I hear a 20-year-old say, “Back in the day.” Why do you think nostalgia is so instantaneous in the 21st century? Surely it’s not just because of the Internet.

IS: But it is because of the Internet and the speed at which we live. Yesterday, even this morning, was ages ago! But that’s not what I meant. Time shrinks and expands according to perspective, eventfulness, and age. For example, to a five-year-old, a summer is really long—that summer when he’s five accounts for a full five percent of his life. A summer at 30 years old, however, accounts only for .83%. So, while five years ago might feel to you like just yesterday, five years ago to a 10-year-old, feels like the deep past. A 20-year-old, quite naturally, can regard his teens as “the olden days.”

Personally, I find myself occasionally nostalgic for the present, feeling a little pained at how moments expire as they occur. This is another side effect, I guess, of growing up. You start to realize life is finite and that time spent is time lost. Free time is an illusion of youth.

I am preoccupied with the idea of nostalgia. The word comes from the Greek and literally means homesickness. It was first diagnosed among sailors who’d been away from home for so long they grew ill with missing it. But home is not necessarily located in the past, and with that, nostalgia does not always have to point backwards. You can feel nostalgic for the future, too. I think this kind of nostalgia is part of the sickness that plagues twentysomethings. You’ve left home and are searching for a new home, and you don’t know if you want to return to childhood or leap ahead into adulthood. For a while, you’re pulled in both directions and the tug of the past and future render you motionless, floating; you’re at sea. Iris Has Free Time is set amid time’s doldrums.

ST: You write a lot about drinking—and blackouts and hangovers—and say that alcoholics, or heavy drinkers, are “time travelers,” which I found both curious and probably true. Likewise, Iris Has Free Time zig-zags in time; it’s 2000, then 2006, Iris is in college and then teaching or writing her novel. Tell me more about time travel.

IS: Time is subjective as Einstein noted and contingent upon an objective observer. Who’s that? In my novel, I liken time travel to the act of remembering (our minds can travel faster than light), to drunkenness (slowed speech, blurred vision—activity similar to what would be observed at a black-hole’s event horizon), to alcoholic blackouts (elisions in memory, like wormholes dropping us off almost instantly on the other side of a very long night).

ST: You’ve written for many publications over the years, mostly at the tail-end of the long period when printed matter wasn’t nearly extinct. Would you advise anyone to pursue a career in journalism?

IS: I would neither encourage nor discourage any career choice, but say that success in any field means work. Greater goals require greater sacrifice. Ask yourself if you are willing to make those sacrifices or, if you shouldn’t revise your goals in light of what you are willing to do.

ST: Halloween is a constant throughout the book. I’m assuming this is a real pleasure for you; is it your favorite “holiday” and why?

IS: I love donning a costume and becoming another person, or, since I’m animating the costume, becoming another version of myself, an alter-ego. Our characters are made up of a long network of choices. We build ourselves, choosing who we are every day. By choosing though, we eliminate a whole host of possibilities. Dressing up is a chance to live, for a little while, one of those lives that came in second or third, or 55th to our own. Though I wanted to be a pirate, it seemed not the thing for a girl born in Long Island in 1978. For me, fiction offers a similar opportunity. That’s why I put myself in my book. That’s me underneath “Iris.” I’m just a little bit “dressed up” for the occasion.