A story of office life. 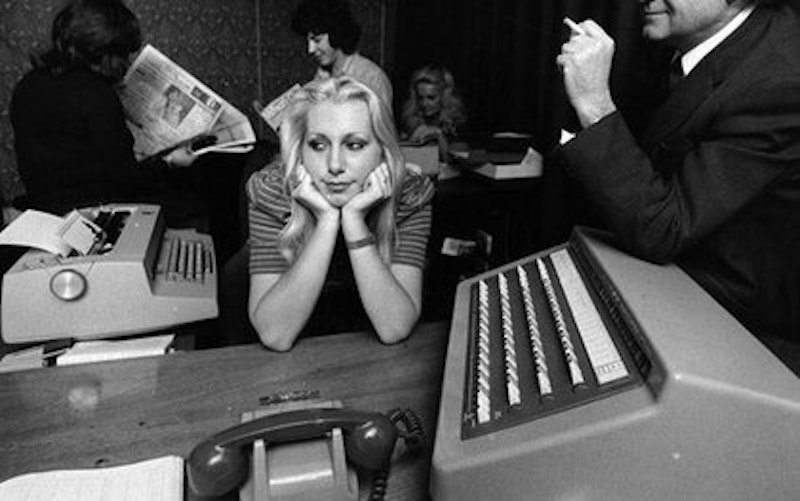 I worked at a trade newspaper for many years. Not all of my colleagues were smart or hard-working or had much in the way of class. Here's a story that involves two of them. Perhaps we can learn something from it.

Let's call the first colleague Gary. He was a large-gutted, lubberly fellow who liked to make noise and who disappeared into the coffee room whenever he had a big project to do. He was a guy's guy, meaning that he used the word “guy” like it was a title of office. What he liked, and what he made noise about, were all things that stand-up comedians cite as guy things: beer, video games, tit spots on TV.

We worked side by side, not in cubicles but at computer monitors stationed along a single long table. Gary, highly ambitious but not energetic, had been thrown a bone in the way of layout duties for a side publication attached to our newspaper. Back then layout was done on paper, and in Gary's case it was done with the help of a metal yardstick that he had brought from home. The yardstick was too big for the space, not to mention the sheets of paper he worked with, but he loved it anyway.

I was promoted, an ascent that came with a move to the other side of the table, nearer the managing editor. My replacement, hired from outside, took my old place next to Gary. Let's say her name was Dolly. She was a skipping, simpering thing who was too old, too wide and too homely for the mannerisms she affected. A woman in her 30s, she called herself a girl, and like Gary with guy she treated the term as a badge that singled her out from the herd. “We girls,” she would say, simpering. She was a feminist, but a feminist of a third-wave, double-reverse sort who made a fetish of liking things that many women have liked over the years: pumps, pearls, broad-shouldered men.

You can see the parallels between Dolly and her new seatmate. Here are some more. Dolly hated to work and she was desperate for attention from our office's social elite. These were the reporters, most of them a few years younger than Dolly and none of them all that much interested in a middle-aged woman with a flat face. Gary longed for their attention too. He was much more successful at getting it, largely because he was a noisy, swaggering man and so were they, for the most part.

Dolly and Gary didn't sit next to each other for long. Gary had managed to become roadkill in a corporate shakeout. He soon gave notice and then spent a couple of weeks at his natural métier, that of sitting around and gossiping. Then he was gone.

Dolly stuck around. One time she recalled Gary to me. She was struck by how little class he had shown. “You know, he was nice to everybody else just because he knew them and they were all buddies, and I was new and he wasn't going to be around, so he didn't have to be nice to me,” she said, with what I suspect was complete accuracy. “And one time,” she said, “one time...” And she described the incident. One time her newspaper or bagged lunch or pocket book had strayed into Gary's zone of the desk. He took his mighty yardstick and whacked Dolly's side of the desk, whacked it hard. “My space,” he said. “My space.” I'll note that he was a couple of heads taller than Dolly and perhaps 100 pounds heavier.

Years passed. Dolly still put in her time, dodging work as best she could. Regimes came and went, and salaries and standards slowly collapsed. Which is to say that Dolly was eventually promoted and spent a few months as a reporter, on our very easiest beat, before scuttling out the door to avoid the sweep of the latest new broom. Before she went she told me another story. One of our newest reporters was a burly working-class fellow who was paid very little but soon proved to be smarter and harder-working than either Dolly or the departed Gary. Not that Dolly noticed. What struck her about him was this: she would be rude to him and he wouldn't seem to notice. She would condescend to him and sneer, and he would smile and thank her. It baffled her.

Why did she condescend to him and sneer? Dolly explained this in passing, as an everyone-knows kind of thing. “I mean,” she said, “I wasn't going to be working with him, so who cares?"