EDYTHE CAROST IS A WHORE

Luckily, the city is broke. 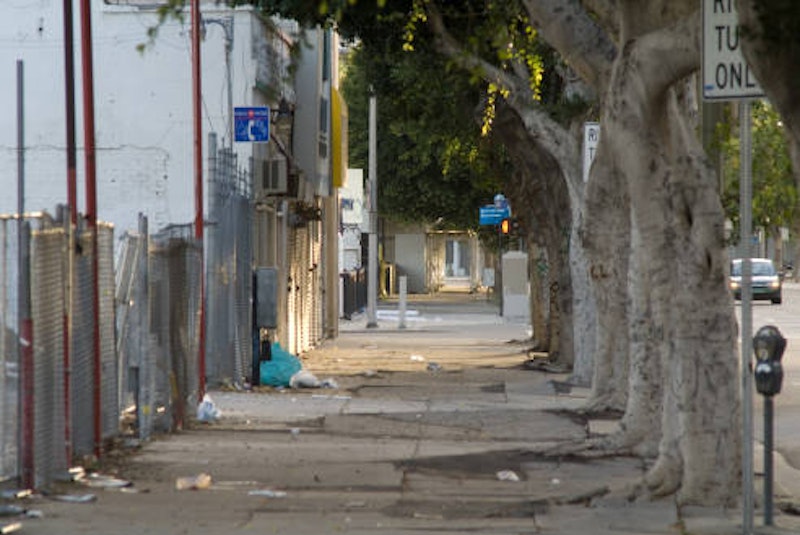 The word is out on the streets, EDYTHE CAROST IS A WHORE. It must be true, it’s written in stone, or at least in cement on the corners of Sycamore and Clinton, in Hollywood. There, in four-inch letters, scratched in the sidewalk for anyone to see on both the northwest and southwest corners and right next to a Hebrew grade school.

EDYTHE CAROST IS A WHORE

Somebody, before the cement had completely hardened, maybe it was Edythe herself, had taken a stick and tried to change the E of EDYTHE to look like an O and the C on CAROST to look like a backwards D. The word WHORE had deep lines going up and down and across it. The last name may not actually be Carost. Carost is just my best guess, but EDYTHE is still plainly EDYTHE despite the effort to hide that fact.

I’ve lived in the neighborhood for nearly 27 years, and I couldn’t tell you how long EDYTHE had been there, but I became aware of her when I was walking Maggie, my last dog, about 17 years ago.

Maggie was in the habit of sitting every time we came to a corner and would wait until I told her it was okay to cross. That particular day I looked down at her, stroked her face, and that’s when I saw the scratching, EDYTHE CAROST IS A WHORE.

I wondered about Edythe. Who she was, a neighborhood girl? How old was she now? Maybe she went to the school on the same block or another nearby? The Chinese Theater is maybe a mile away up the road; surely she’d seen the famous landmark with movie stars immortalized on the grounds. Was it Edythe herself that scratched her name in the cement? And then later someone else came by and added IS A WHORE

Was it done in mischievous fun or out of hate? Perhaps by one of her classmates, a girl angry with Edythe for stealing the attention of a boy? Maybe it was a young boy who liked Edythe and didn’t know how to show it or say it to her. Makes you wonder. And have I ever laid eyes on Edythe during one of my many walks?

A while back, when the city had money, they sent street repair crews out to make the corners wheelchair accessible and I feared it would be the end of EDYTHE CAROST IS A WHORE.

I didn’t want to lose her, so I tried to make charcoal impressions. I covered the area with heavy paper from an artist supply store and rubbed a flattened charcoal stick over the scar of the words, but the rough raised letters only gouged and tore the papers.

Another time I poured a bottle of water all over the sidewalk and shot a roll of black and white film, but none of the pictures came out right. Something was missing. The city has since gone broke and Edythe for now is safe.

I walk my new dog Abbie twice a day through the neighborhood. We don’t always walk on Edythe’s street, but I think of her often. And for all the time that I’ve lived here, I realize that I hardly know any of my neighbors. I know faces and some stories, a few details. The guy on the next block was the director for Debbie Does Dallas; the old woman who walks the Basset hound used to meet regularly for drinks with Salvador Dali; a circle of budding alcoholics that called themselves the “cirrhosis club”; and then there’s the actor guy that played the gimp in Pulp Fiction. There are other cement impressions: Chiquita, Juniper, JT and AT Forever, scratched into cement elsewhere in the neighborhood.

And I don’t know if Edythe was a whore or not. I thought of asking everyone in the neighborhood if they ever knew her. The spelling of her first name would be key. I’ve never seen a y in the name Edythe let alone an e at the end. And Carost, if that is her last name, I’ve never known any.

But whores, I’ve known a few.