They aren't just an Internet joke. 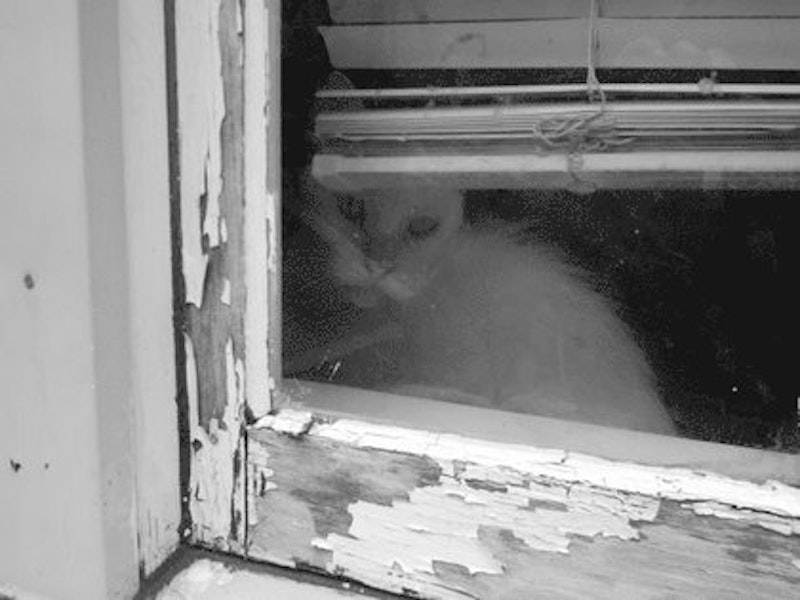 About a decade ago I was working for the Maryland Historical Trust documenting historic houses. The job required me to drive up to each historic house in the county, see if it was still standing, and take a photograph.

At the time I had a newborn baby in the car with me. The work featured flexible hours, so she'd ride with me while I took pictures, often from the car window. One time, on a very long, very muddy farm lane, the car got stuck in the mud. It was pouring rain and very cold outside for April. I couldn't back up or move forward; each attempt dug me further into deep mud. I was a half-mile walk from the next nearest house, and though I had a cell phone at the time, it was back at home on the charger by mistake, no doubt left behind in a foggy haze of sleep-deprived new motherhood.

I was convinced that the house I’d been planning to snap was abandoned. The neglected state of the driveway lane, lack of cars, and dilapidated state of the 19th-century brick farmhouse led me to believe no one was home. I glanced at the clock in horror: my preschool daughter's bus would arrive at our house a few miles away in less than 30 minutes.

I couldn't drive, couldn't carry a newborn in an infant carrier in the rain a half mile, and couldn't call for help. And then I saw a very mangy looking dog walking down the drive followed by a second mangy dog. Visions of Cujo flickered in my mind. And suddenly there she was. In dirty clothes, the woman looked homeless, but I immediately realized she was the occupant of the crumbling house. I rolled down my window. Come in, she said, and we’ll call someone for help.

What choice did I have? Staying in the car wasn't going to get me home to the bus and my four-year-old in 30 minutes. I took my infant in her carrier, grabbed an umbrella and followed the woman, doing the thing people who don't pray that much do, which is apologize to God for not praying in awhile but explain it was kind of a prayer 911.

I entered the house and the first thing that hit me was the smell. It took everything in my power not to gag. I had lifted the baby's blanket up over the handle of her seat and was thankful this absolutely disgusting stench-air at least wasn't hitting her in the face.

You couldn't take a step without stepping on a cat. I stood still. The woman was not apologetic about her environment; she seemed simply unaware of her surroundings. There were old cats, kittens, sickly looking ones as far as I could see. She told me to follow her into the next room where the phone was. I stayed in her cat-clearing wake, walking slowly.

She talked like a person who does not see other people very often. She told me about her boyfriend from another farm who was going to marry her. She was slightly confused, repetitive and nervous. I asked in a friendly, conversational manner how many cats she had. She wasn't sure, she had a dozen but they "kept having kittens." Shredded-open bags of cat food lay on the kitchen floor. I never saw a litter box, but the smell indicated the home's inhabitants had long stopped using it anyway. She picked up what I hoped was a working wall phone, called her boyfriend and asked him to come pull my truck out of the mud.

I breathed through my mouth to avoid the stench. I looked around. Architecturally, it had to be one of the purest homes I'd seen, never touched with paint or renovation, it reminded me of what my architectural historian mentor had said once in class: "poverty is the best preservationist." The original furniture was in its original placement. Cats crawled in and out from a once-gorgeous antique dining room sideboard, its legs used as scratching posts. I looked into the main living room. It had been completely taken over by rabbits. A once-opulent Victorian sofa was hollowed out and rabbits nested among the springs. The entire floor of the room was covered in rabbit droppings. She came in, again not apologizing for her beyond-imagination menagerie hell. She asked if I wanted to go upstairs. I politely declined.

And then I heard a pickup truck in the driveway. She said it couldn't be her boyfriend; he was too far away. It was a farmer, an older man from the farm next door, who had seen my stuck vehicle. He'd simply towed it out and was there to return me to my car.

I thanked the woman, loosened the death grip I'd had the whole time on my sleeping baby's seat, and returned to my car. “She's a little nutty, that one,” said the farmer, and I smiled and thanked him profusely. I got home just as the preschool bus arrived. On behalf of the many sick animals, not to mention the sick woman, I made phone calls, eventually finding a family member of hers. And now, 10 years later, I see the farm is for sale. I don't know if she or the cats are still there.