If things get tough, you've always got the bridge. 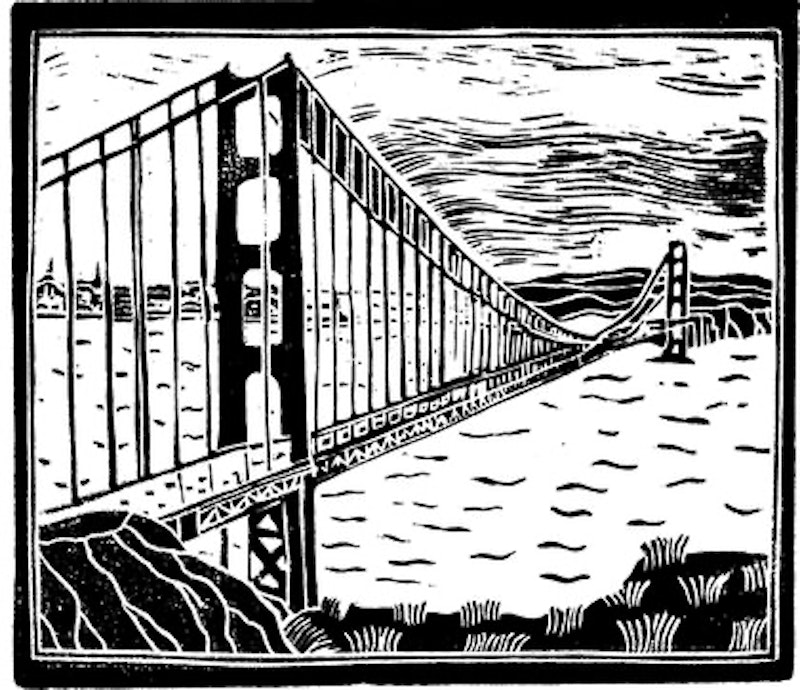 My definitive San Francisco moment occurred in 1992. I was walking east on Polk St. when I encountered two young transvestites smoking crack in front of a burned-down building. I was drinking a Kern's Nectar and after taking the final sip, I tossed the bottle into the trash. One of the transvestites put down his crack pipe and spoke. "Hey man, don't you recycle?"

That’s a microcosm of my San Francisco experience. People felt free to live an alternative lifestyle yet they didn't hesitate to criticize the lives of others. I moved to San Francisco two weeks after the 1989 earthquake. The day I moved into my apartment I noticed a spray painted message on the sidewalk reading: "I don't believe in Bob Hope." I understood. This was the land of Jack Kerouac, Jerry Garcia and the Zodiac Killer. Alternative was the norm.

The first person I befriended in the city was a Berkeley Linguistics professor who loved archery, Hungarian cuisine and Japanese bondage. He was typical of the San Franciscans I met. My revolving door of roommates included an animal taxidermist, stripper, funeral home cosmetologist, William Burroughs impersonator and a narcoleptic house painter.

My first job there was as a videographer for a local bar that hosted a Monday night talent show. Participants were homeless men recruited just before showtime with promises of food and drink if they sang pop songs or attempted ridiculous dances. During the show, the proprietors sold semi-ripe tomatoes for 50 cents each that audience members hurled at the performers.

Subsequent jobs included being a urine messenger for a law firm that drug tested employees (I carried the samples to a testing lab), working as a night clerk for a Tenderloin hotel whose clientele included prostitutes and drug dealers and writing fortunes for a Chinatown Cookie Company. (My favorite: "Help! I am trapped in the basement dungeon. Please call police!")

My lengthiest job was as an assistant counselor at an Alzheimer's Day Care Center. The aging clients reminded me of my grandparents. Despite their memory loss and fading personalities, they seemed more normal then everyone else in the city. On one occasion, a client turned up missing. He'd been an Oakland bus driver in his heyday and whenever we served lunch he'd say, "I'll take the T-Bone, medium well." The day he was discovered missing, I had a hunch. I called a taxi and asked to be driven to the nearest steakhouse. Sure enough, the man was sitting at the bar drinking a Manhattan and eating a steak.

Dating was hard in San Francisco. The first woman I dated was a bisexual waitress who'd had a spat with her live-in girlfriend. She spent the entire meal insulting men and complaining about her lover. She finally admitted she only went out with me to make her girlfriend jealous.

My second date was with a young German woman named Adeline whom I met at City Lights Bookstore. She was reading Gogol’s The Overcoat, one of my favorites. She gave me her number and address and we agreed to meet the following week for dinner. When I arrived at her residence, I saw a sign that read "Mount Zion Psychiatric Hospital." Turns out she was a patient who'd recently attempted suicide after breaking up with her boyfriend. Over pizza and beer she showed me the fresh slash wounds on her wrists. I safely returned her to the psychiatric ward then swore off dating for a while.

San Franciscans had a passionate hatred of Los Angeles. Typically when someone learned I was from L.A. they'd say something like, "Really? You don't look like a Hollywood asshole." While playing basketball in a local park, a player intentionally head-butted me knocking out two of my teeth. As I rolled around in pain, the guy said, "Sorry about that, Hollywood."

I had long hair in those days and wore bandanas to keep it out of my eyes. On one occasion a man with a thick mustache began following me through the streets. I stopped in a cheese shop to try to lose him but when I came back outside he was still there. Finally, at a crowded intersection, I walked right up to the guy and asked, "What the hell do you want?" He smiled and pointed at the yellow bandana on my head. Months later I learned about the San Francisco gay bandana code. Yellow meant you liked to be pissed on. Red meant you liked hairy men. Blue meant you liked to dress up as a cop and brown meant… well, let’s skip that.

After three years, I reached my San Francisco saturation point. The lovely fog had become depressing, the dense concentration of people was claustrophobic, and the alternative lifestyles were no longer charming.

The turning point came in 1992 when I was caught in a traffic jam on the Golden Gate Bridge. A man had just leaped from the bridge. Traffic was stopped in both directions and drivers were out of their cars scouring the ocean for the jumper. Half a dozen boats hopelessly trawled the water. I asked a cop if this happened often. "Sixth one this year," he said. That night I learned San Franciscans had a saying: "If things get tough, you've always got the bridge."

The incident sent me into a tailspin. A month later I went through a horrible breakup. I also lost my job at the Alzheimer's Center. Around this time I received a letter from Adeline, the woman I’d met in the bookstore. She was back in Frankfurt, Germany living with her parents. She worked at a veterinary clinic helping find homes for lost dogs. She wrote that she was doing better, and thanked me for taking her to dinner, saying it helped her healing process.

This reminded me of the spray painted message in front of my apartment. I hadn’t read it in years. The word “Bob” was now gone. The message read: “I don’t believe in Hope.” I moved out of San Francisco a week later. Even if I was a “Hollywood Asshole,” Los Angeles was where I belonged.