The “Yes We Have It” street is gone. 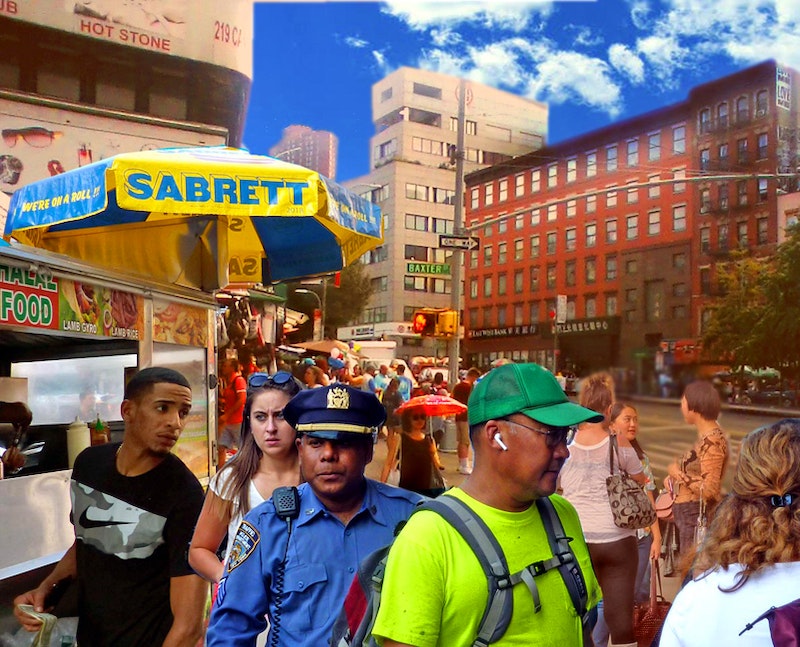 You can hear the sound of a couple of grimy pigeons fluttering their wings high above. That’s a rare moment on Canal St. between traffic lights. Standing side by side at the crosswalk, the light changes and commotion returns. If you have one of those quiet pauses, you might also hear squeaking, plastic green frogs. All along the busy sidewalks, the toys swim in buckets of water dotted with good-luck pennies. They look cool in the winter when frozen.

The “Yes We Have It” street of yesterday, brimming with cheap electronics, industrial plastics, plumbing supplies and light bulb stores is gone. I’ll always remember a shop that once sold Tibetan monk head skulls alongside bootleg CDs and adult DVDs. Now “For Rent” signs are sandwiched between cheap souvenir and vape stores.  Every single day business on Canal St. is a challenge.

In the early-1800s, a bridge once crossed over a stream on lower Broadway. Cholera outbreaks forced the City’s Common Council to dig a ditch to drain nearby Collect Pond, a once pristine lake in 1811. The polluted water flowed into the Hudson River. Soil from downtown’s tallest hill, Bayard’s Mount, was used to fill in the pond. The poorly-engineered landfill became the unpaved mud streets of the notorious urban slum Five Points. The open sewer was covered in 1819 and voilà, Canal St.

The original sewer lines still exist below, as do side drains entering from underground springs like the one that gave Spring St. its name. Jason King’s site Hidden Hydrology discusses the underground with a modern-day urban explorer, Steve Duncan.

During the early-20th Century, commercial business and residences thrived along Canal, but that changed. The Manhattan Bridge opened in 1909, and then the Holland Tunnel opened in 1927. Canal St. became a short cut through Manhattan between Brooklyn to New Jersey. The obvious result: a major traffic artery clogged with constant traffic, everyday gridlock and noise. A bit of advice for pedestrians: don’t jaywalk “Manhattan’s boulevard of death.”

At the tip of the wealthy Tribeca neighborhood, there’s a precious, triangle pocket park at Varick St. It remains fairly invisible unless you’re traveling on foot. Dedicated in memory of a devoted, community activist, Albert Capsouto Park highlights artist Elyn Zimmerman’s sculptural fountain that reflects the street’s canal past.

Further east at 308 Canal, is the building once known as Pearl Paint, the dethroned king of art supply stores. Pearl was an institution where you could learn about making art. Opened in 1933, its doors finally closed in 2014. The store had a slow, industrial elevator in the rear, but I took the wooden stairs on the left, much quicker. Scary memories on those creaky, haunted house flights of steps that led to six different floors. You’d open a heavy door unveiling brushes, paper, markers and paints stacked floor to ceiling. Offbeat artist employees cut canvas sizes to order. Now the building’s been converted to luxury apartments, topped by an $18,000/month penthouse. The exterior’s painted battleship gray.

As you approach Broadway and Canal St., the sleeping dragon awakens. You’ve entered the heart of Chinatown with a population explosion. The home of the “Do I Look Like a People Person?” t-shirt is a destination for tourists and residents alike. It only makes sense the latest John Wick movie was shot here. The neighborhood’s narrow streets are lined with restaurants and food stands, full of exotic fruits, vegetables, dried jellyfish and sea cucumbers.

Pump up the volume—“Chanel, Prada, Rolodex”—aggressive hawkers and shoppers overflow the sidewalks. Midwest teenage daughters with moms in tow cut deals right on the street. Everyone knows the stuff is fake. Occasionally the US District Court will stage a raid to seize merchandise. In an odd twist, this very same location is eerily desolate at night.

there’s a problem that threatens the very essence of Chinatown: the closing of Rikers Island prison. Mayor Bill de Blasio’s administration’s plans are to wield the axe and demolish the existing Manhattan Detention Center located where Chinatown and the City’s Civic Center intersect. Puzzled businesses and fearful residents oppose the new facility but the New York City Council plan is due to pass.

I’m no saint, but I hope City Hall does the right thing so everyone can continue to enjoy this community’s business and historical integrity. Just the other day, I went to the Chinatown Fair Arcade to see the tic-tac-toe playing chicken. It was disappointing. The bird’s gone; it’s retired.