Somebody I Once Saw Alone at the Movie Theater 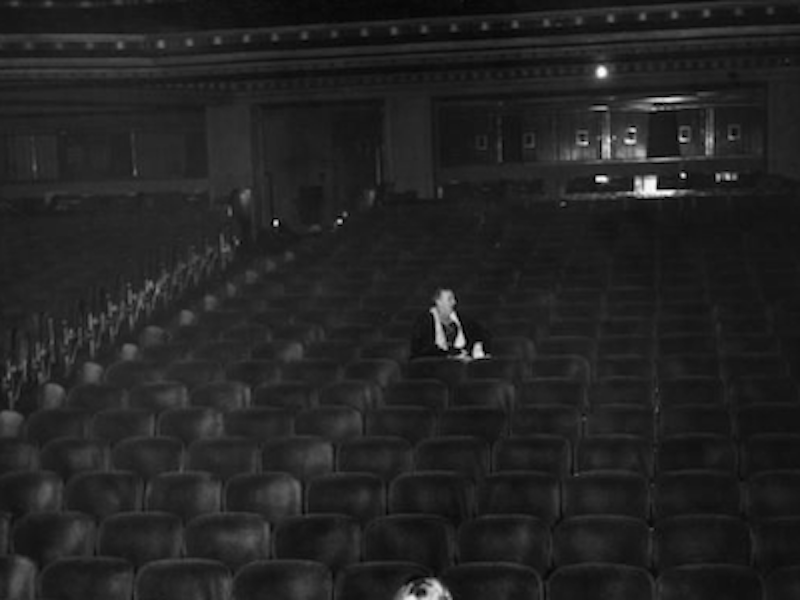 This memory has stayed with me, but there’s no story to go with it. I can’t even say why it matters to me, except in the uh-duh sense that it’s sad to see a sad person. The person in question was a woman in her late-20s or early-30s. She was East Asian by descent and a bit chunky. She wore glasses and her hair was cut in bangs. I saw her one Sunday afternoon at a bargain movie theater near midtown, at the end of a teen thriller that featured good-looking boys and girls. I think the credits were done, because I usually stay for the credits, and the lights had come up. Or maybe the lights had come up in the middle of the credits, because the theater was careless that way. But people were on their feet and drifting out to the lobby, and the girl sat there.

She was dressed in ironed slacks and a neat sweater and had the look of someone whose life is pulled together, not sprawling. I imagined she was a researcher at one of the universities, or someone promoted to middle management at a young age. Even so, she looked at a section of floor or the backs of the empty seats in front of her (I forget which) and she looked sad. Then I passed her and I pulled open the big metal door to the lobby and found my way to the escalator.

Outside was sunshine. It was the weekend and I felt sheepish about spending time in the dark. But such was my life. Actually, going to the movie theater counted as an adventure. I mean this particular theater, since it was vast and buried. There were half a dozen screens, the screens were big, and the seating went on for acres. But the place was a misfire: Management couldn’t get people in unless tickets were a dollar. I stumbled across it when looking for a movie to kill time on a Sunday. Now I counted it as a discovery. On a weekend, waiting for the office to return, the height of my social life would be sitting with the audience and hearing what it had to say.

The woman looked to me like somebody facing failure and loss. She’d loved somebody and now that person had left, and the woman was alone with the results. She was sizing it all up and feeling what life would be like. Playing back the memory, I find I add the thought that she was a bookworm who’d finally been loved and thereby accepted into the social world, the world shared by people who know people. Now she was wondering what she was good for. And here she’d come, straggling in on a bright Sunday afternoon to look at the handsome teens having problems.

Or so I imagine, since that was close enough to my own situation. I don’t know. She looked like a good person whose heart had been broken, and I never saw her again.