We Russian Orthodox Paleocons Have Lost the Battle Over Ukraine 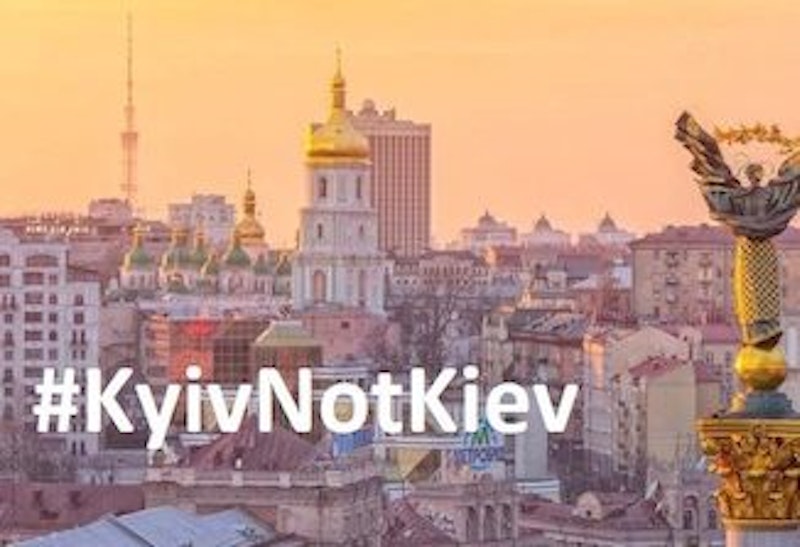 It looks like we traditionalist right-wingers’ campaign to portray independent Ukraine as a fully mobilized Nazi state have failed.

No, blame not the messenger. I don’t like this any more than my fellow paleoconservatives do. But part of good strategizing is to take the facts as they are and to get an objective read of the battlefield.

And the objective facts seem to be that Ukraine’s stock is rising in the West. Take the glowingly positive article about Ukraine that prominently appeared in The Wall Street Journal last weekend. The article cites Ukraine’s 4.6 percent annualized economic growth in the second quarter of this year and its current cultural renaissance. It cites the country’s liberal conception of Ukrainian citizenship, which welcomes non-ethnic Ukrainians into the national fold. It mentions that Ukraine’s current president is a Russian-speaking Jew and that the country’s far-right forces are less popular in Ukraine than analogous far-right movements are in Western Europe. It quotes someone calling Ukraine the “most interesting place in Europe right now” and says that Ukraine is filling up with tourists. It calls Kiev—which it refers to, tellingly, as Kyiv—the “new Berlin.”

Like it or not, I suspect this article’s influential audience (disproportionately consisting, of course, of dispositively powerful Wall Street Zionists) will find it persuasive. This battle is lost, my right-wing comrades.

And to add insult to injury, recently the AP made official that it will refer to the Ukrainian capital as “Kyiv” and no longer as “Kiev.” That is, it will transliterate from the Ukrainians’ own dialect, and no longer from Holy Russian. The AP’s move will institutionalize this change, unfortunately. Soon enough, no mainstream English-language news source will refer to Kiev—the Mother City of Russian culture and a place that the world once considered unambiguously a part of Russia—by its Russian name ever again.

This is, to steal a phrase, a big deal.

We’ll have to see where this ends up. Brother Gavin, my partner on my Benedict Option property here in Indiana, keeps harping, semi-coherently, on Oliver Stone’s gloriously pro-Putin, pro-Kremlin 2016 documentary Ukraine on Fire, about Ukraine’s aggression against Russia. Gavin’s contention is that if Americans could in large numbers see the film, it would make all the difference. Seeing the truth, Americans would decisively embrace the Russian agenda in Ukraine, and elsewhere in its “near abroad,” in all of that agenda’s benevolence.

I’d like to think Gavin is right. But I’m not so sure as he is that Ukraine’s deposed former President Yanukovych, that corrupt ex-con and Kremlin puppet (I mean those epithets in a good way, of course) is as apt to “come across” to American viewers as Gavin believes he is.

Now, Putin, by contrast with Yanukovych, is a man of considerable charm. Under normal circumstances he would appeal naturally to the proverbial viewer in Peoria, Illinois. But given the extent to which the American public consciousness has been polluted by floods of anti-Russian propaganda, “normal circumstances” no longer inhere.

I should mention that Mother, with her peculiar blend of pro-Russian fanaticism and tactical cunning, has thought up a way to “smooth the pill” of Stone’s documentary for American audiences. She suggests preceding the broadcast of the movie with an intro from a reassuring and charismatic host. Her reference here is Alistair Cooke, who used to introduce the Masterpiece Theatre broadcasts in her youth and mine. She suggests that Buchananite American Conservative founder Scott McConnell play the Cooke role for the Stone film. I think she’s got a point, even if I’d rather go with Yale professor Daniel Larison, the iconic paleocon columnist and world-famous Russian Orthodox theologian.

Either way, a delightfully dead-eyed White specter, slightly smirking as he drones, staring blankly out at the viewership through the sort of spectacles made so chic by Michael Douglas in Falling Down, is just what the doctor ordered when it comes to selling Russian imperialism to the Great American Middle.

Were my medical treatments not causing unsightly lesions on my chest and throat, I’d offer to serve as host myself, being a not-uncharismatic fellow. I’d exchange my Lands End shorts for my best pair of Dockers and polish the straps of my favorite sandals for the occasion.