To Sir, with Love

In literary circles, Tuten’s regarded as something of a god, at least among those who still believe in literary gods. 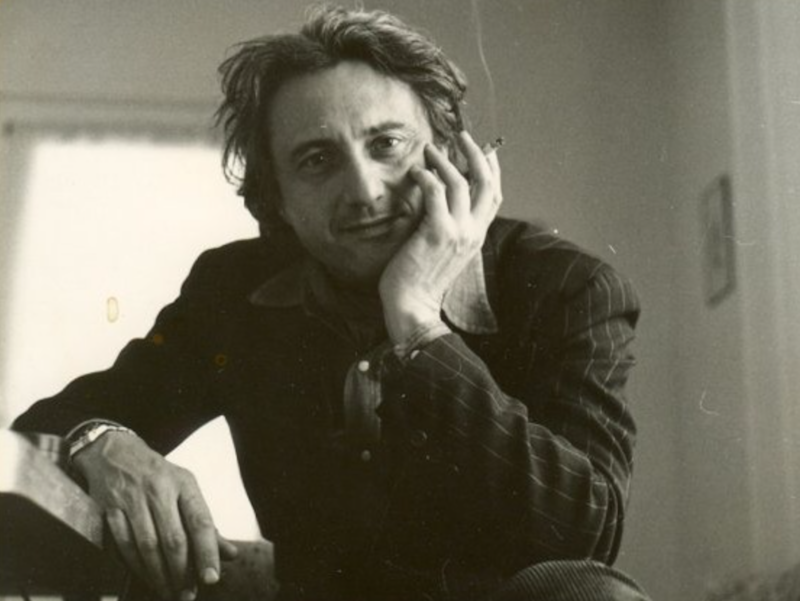 “This is what everyone is reading,” she said, handing me the book. “Everyone in the know,” she clarified. I was 23 and just out of college and wanted to be a writer, a great novelist, maybe a scholar on the side. I was visiting my then-boyfriend and his parents at their summer home in East Hampton, and had just come downstairs after an afternoon of crying over my future. I dreamed of being a writer. I wanted to break life open and see what was really inside, and tell people about it. But I didn’t know how. More pressing than my dreams though, were questions of life: What job, where to live, what next?

The cover of the book I’d been given showed a benday dot rendering of Herge’s famous comic book character Tintin sitting in his living room, as a dagger flies through an open doorway, crossing in front of Cezanne’s dancers, and just missing him. Roy Lichtenstein painted it especially for the book. I turned the book over.

“Frederic Tuten is a magician, and in Tintin in the New World he has taken his most ambitious, most inspired journey. I love the way the novel deepens as it goes, the music of it, the sadness, and the inventive humor. It’s wisdom and its art…” Susan Sontag had written. I took the book back to my small apartment in New York that week, and between the honking horns and growling diesel engines of cars and trucks trying to leave the city through the mid-town tunnel where I lived, I read.

I wasn’t familiar with Herge’s Tintin, nor had I read Thomas Mann’s The Magic Mountain on which, I later learned Tuten’s novel had been modeled, but it didn’t matter; I was swept along in the dream. Tuten takes the perennial boy reporter Tintin on a journey to Machu Picchu where he falls in love with Thomas Mann’s ingénue Clavdia Chauchat, has sex for the first time and, with that, grows up, trading the clear moral landscape of childhood for the ethical ambiguities of adulthood.

This is what I wanted out of life: philosophy, art, music, humor, love, meaning. I loved the book and right then, Tuten through his writing, became my ambassador to that world I knew existed however far away it was. A few years later, after a stint teaching public school in the south Bronx, I enrolled in graduate school still wishing to become a writer, still not knowing how, but moreover, wanting to meet Frederic Tuten, whom I learned had founded the creative writing program at City College.

Are there less expensive ways to meet one’s heroes? I comfort myself; at least it was a public school. How did Dante meet Virgil? Virgil was already dead, so Dante had only to imagine him. Lucky for me, Tuten was alive and, first through his books, then through his lectures, and then through his friendship, he invited me into my new life. When I finally published my first novel, Iris Has Free Time, years later, (modeled loosely on Dante’s Divine Comedy and Proust’s In Search of Lost Time), I dedicated it to my mentor and closest friend, who’d been my teacher long before we met. I wrote: “To Frederic Tuten, my Virgil, for seeing me through the fire.”

I’ve read all of Tuten’s books now, going back to his first and seminal The Adventures of Mao on the Long March, which exploded the whole notion of what a novel could be. In Tallien: a Brief Romance, Tuten himself speaks to his dying father who left when he was a boy, telling him the long story of the French revolutionary, Jean-Lambert Tallien Lambert. Why does he tell him a story about people neither of them would ever meet? Why can a story communicate more than we can hope to say in ordinary conversation? The Green Hour, I read over two long days in bed, heartbroken over some guy whom I thought was the whole world, but turned out to be just a small stone in it. And then, Van Gogh’s Bad Café, about a love triangle between Van Gogh, an East Village artist, and the time-traveling heroin addict who commutes between them. And now The Bar at Twilight.

What’s your favorite color? children ask each other. Mine’s the milky green of absinthe in Tuten’s The Green Hour, the red brick of a Lower East Side alleyway in Van Gogh’s Bad Cafe, the yellow sun “in full fire” of Tuten’s collections of linked short stories, provocatively titled, Self Portraits: Fictions, the blue of a horse that slides up to the bar in that same book. Why fictions as self-portraits, he compels us to ask? And then later, why write a memoir that reads like a novel? In his memoir, My Young Life, he describes all that happened before he became a writer, before the cartoon daggers, the blue horses and the green absinthe, before a surreal Mao Zedong meets Greta Garbo on the Long March.

In literary circles, Tuten’s regarded as something of a god, at least among those who still believe in literary gods. His work is so good, it’s a wonder he’s not dead; all the best writers are. What a privilege then not to have to imagine him, as Dante did Virgil, but to walk down to his East Village apartment and say hi, have coffee and talk about books, art, music and love.

If Tuten’s self-portraits were fictions, his memoir is myth. According to Joseph Campbell, myths are allegories from which to learn about life. Tuten’s myth tells the story of a boy who wanted so much to live, but didn’t how or what to do. How do you become an artist when your world is so far removed from all those glittering persons and places you read about, when you’re lying on a fold-out cot in a small room in the Bronx, and Hemingway and Fitzgerald are faraway in Paris?

With A Moveable Feast, Hemingway (Tuten eventually met him in Cuba, according to his memoir) made Paris a literary mecca. Tuten’s memoir, My Young Life, also points a way, if unexpectedly. It directs readers home to their own, now maybe lost backyards. Tuten’s was the Bronx of the 1940s and 50s, and its shards of broken bottles and litter glimmers in his reminiscence. His memoir inspires us to appreciate our own beginnings, however humble or unremarkable, and see in the detrita of that life we so urgently cast off, in the shabby homes we were so eager to escape, the myths of our future selves. And his fictions? They are self-portraits, because our dreams are who we always were.