Columbia and the History of 116th St.

Making the Ivy League by alternative means, via 116th St. 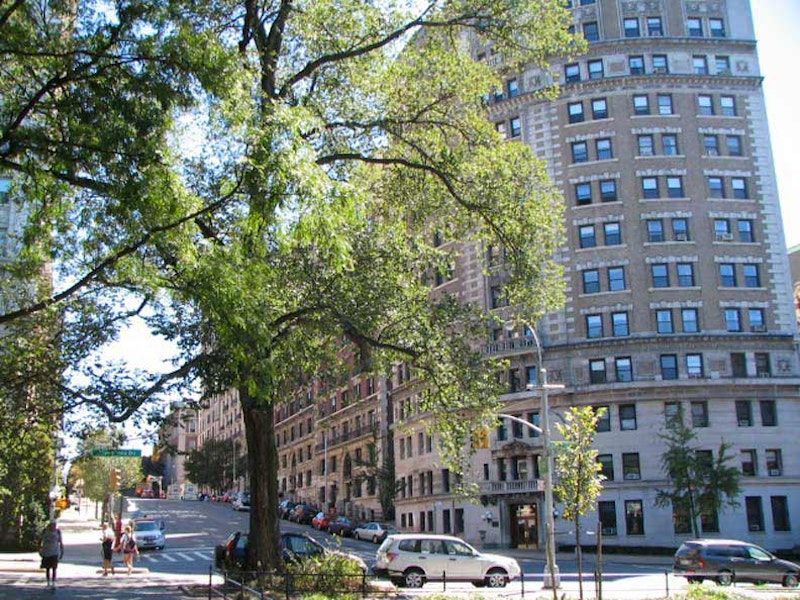 In March 2010, I finally made the Ivy League. Not the way you think— my grades/ambition and funds were always too low for Columbia, but I got a glimpse of Ivy League campus life when asked to do a Forgotten NY Powerpoint and lecture, which was at Columbia’s Fayerweather Hall just off Amsterdam Ave. I was inspired enough to look into a possible Forgotten New York page concerning the Columbia campus. All these years and a couple of photo shoots later, I’m still considering it. In any case, I’ve walked the length of 116th St., which cuts across the Columbia campus, from river to river. 116th is singular among NYC’s major wide numbered streets in that it’s interrupted twice, by the Columbia campus and Morningside Park.

Beginning at Riverside Dr. and easing east on 116th, here is New York City’s “original” Colosseum (I realize that Robert Moses’ big, drafty exhibition space at Columbus Circle from the 1950s to the 1990s was spelled “Coliseum”). The gently curving apartment building was constructed in 1910 and, between 1920 and 1925, was home to US Supreme Court Chief Justice Harlan Fiske Stone (1872-1946). 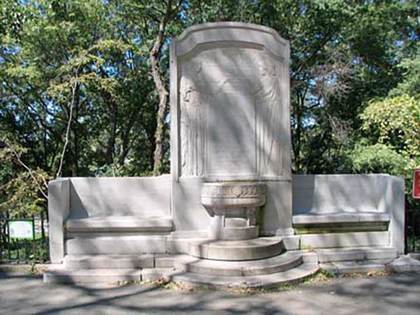 The west end of W. 116th St. at Riverside Dr. is marked by the Women’s Health Protective Association Fountain, installed in 1909, Bruno Louis Zimm, sculptor. The fountain consists of a stele with a fountain in front, with two marble benches on the side inscribed with the names of WHPA founders and associates. Charlotte Wilbour, whose name can be seen on the bench below right, helped found the first New York City Woman Suffrage Association in 1870; it was among the first organization to agitate for female voting rights in the USA. I thought this fountain looked vaguely familiar, and sure enough, sculptor Zimm also created the poignant Slocum Memorial in Tompkins Square Park in the East Village. 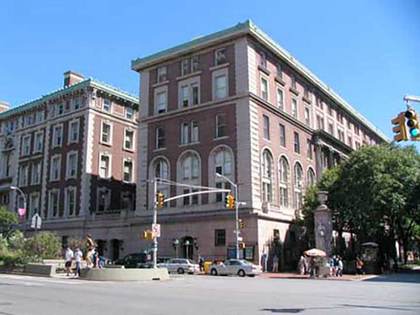 The Columbia University campus runs from W. 114th-W. 120th Sts. between Broadway and Amsterdam Ave. As Kings College, founded in the colonial era, it once occupied a site near City Hall (a W. Broadway building sign still says “College Place”) and later moved to the East River site now occupied by Rockefeller University. It has been here on its magnificent campus with many buildings designed by Charles McKim of the McKim, Mead and White firm since 1897. There was a time when W. 116th ran right through the school grounds, but it closed to traffic years ago and is now a grand walkway (College Walk) through the center of the campus. This land was once occupied by the Bloomingdale Insane Asylum. The asylum was in operation from 1821-the mid-1880s. Seen here is Dodge Hall, containing the Kathryn Bache Miller Theatre, home of Columbia’s music and arts schools, at Broadway and W. 116th. 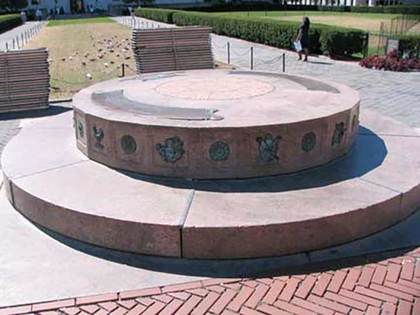 When I made that presentation at Columbia, many of the attendees were unaware that the Sundial, a fixture and meeting place on College Walk for over nine decades, once had a 16-ton polished green granite globe positioned on top of it. It was a gift in 1914 from the Columbia College class of 1885. The sphere began to develop cracks in 1944 and was removed in 1946. For a time Columbia U. didn’t know its whereabouts, but it turned up in a field in Ann Arbor, Michigan in 2001; efforts to reclaim it have been unsuccessful. 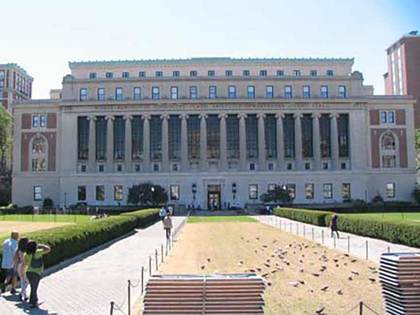 Butler Library has one of the city’s longest Ionic colonnades with 14 pillars. It’s relatively new for classic-styled architecture, finished in 1934. It was named for Columbia president Nicholas Murray Butler, who lived 11 years after the building was named for him. 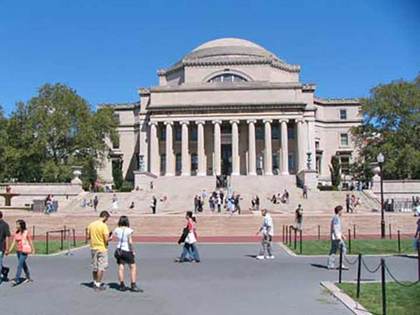 The Low Memorial Library was a charter member of Columbia University, completed 1897 by Charles McKim. It was named for Brooklyn mayor… then Columbia president… then NYC Mayor Seth Low. It’s become a ceremonial space in recent decades and has 10 Ionic columns to the Butler’s 14. There was once a rowing track and canvas tank for Columbia’s crew in the basement. In front of the steps, Daniel Chester French’s Alma Mater (1903) greets students, faculty, and passersby. Currently bronze-colored, she’s gilded in gold and has become green with verdigris during the years. Radical campus protesters tried to blow her up in 1970. 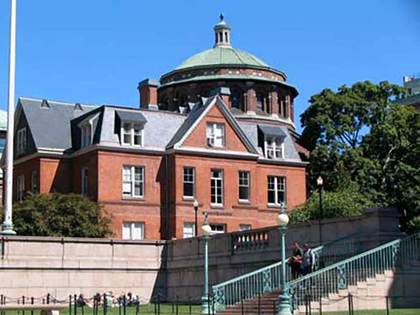 The Macy Villa, now Maison Française, Columbia University’s center of French culture, is the oldest building on campus and the only leftover from the asylum days. Officially it’s known as Buell Hall; when built in 1885, it took its name from principal donor, William H. Macy, a cousin of department store magnate R.H. Macy. The Villa adjoins St. Paul’s Chapel, a gift from the Stokes family of industrialists/philanthropists, and completed in 1907. A member of the Stokes family, Isaac Newton Phelps Stokes, was a partner in the firm that built it; Stokes also wrote one of the best NYC histories, the massive The Iconography of Manhattan Island. 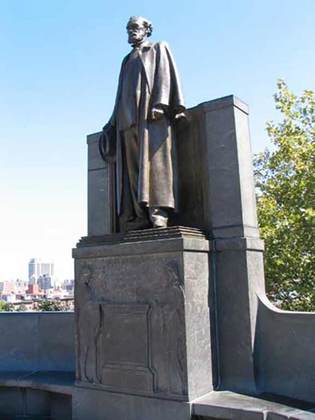 Who is that guy? W. 116th comes to a halt once again at Morningside Dr., overlooking Morningside Park. It would have to descend a steep angle if it were to be run through here, so 19th-century engineers and surveyors didn’t even try. This dramatic setting is marked by Karl Bitter/Henry Bacon’s 1913 Carl Schurz monument, honoring the mid-19th century German immigrant (1829-1906) who became a Civil War general, US Senator from Missouri (1869-1875), Rutherford Hayes’ Secretary of the Interior (1877-81), editor of The New York Tribune and Harper’s Weekly.

Early on, developers realized the steep slope in this part of town would be impractical to lay out streets and houses and so, as early as the 1850s, it was thought a better idea to design a public park for the sliver of land from Cathedral Parkway (110th St.) north to W. 123rd and generally between what became Morningside Dr. and Morningside Ave. Central Park’s architects Frederick Law Olmsted and Calvert Vaux designed most of the park. By the 1980s the park was in disrepair and crime-ridden, before a 1989 redesign. 1998 saw the initiation of the Dr. Thomas Kiel Arboretum, named for the founder of Friends of Morningside Park who was killed in a 1996 accident. The arboretum is located down the steps near W. 116th. 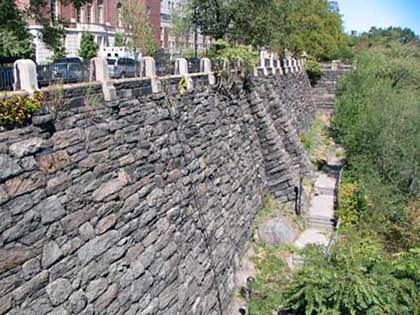 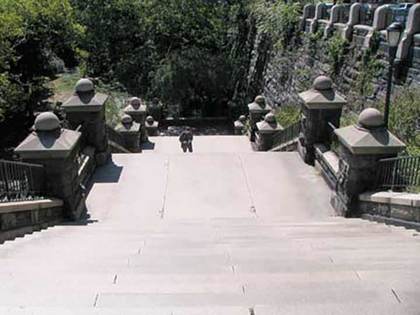 That the park is called “Morningside” is easily discernible from its remarkable eastern views. When O & V’s initial design for the walkway and steps overlooking this view were rejected, their Central Park collaborator, Jacob Wrey Mould (who designed the Terrace overlooking Bethesda Fountain, and many of Central Park’s decorative arched roadways) was brought in, and it’s his designs for the monumental buttressed masonry wall and massive steps, with their concrete stanchions and globes, that you see here.